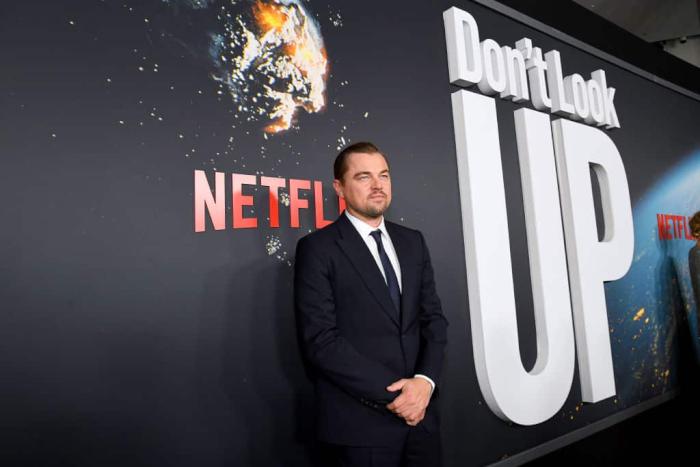 The Under 25 Elephant in Leonardo DiCaprio’s Room

Leonardo DiCaprio is single once more. After over four years with actress and model Camila Morrone, the pair called it quits. Everyone had been waiting for news of this break-up. Not because there had been rumblings of trouble in paradise or well-documented tabloid troubles. We all had our eyes on the headlines and ‘sources’ announcing a split because, on June 16, Morrone turned 25.

We’ve all seen the graph. We know that Leo has a type and where his highly specific cut-off for female desirability ends. DiCaprio, who has been famous for almost his entire life, has never dated a woman over the age of 25. Not when he was a teen heartthrob. Not when he was actually 25. And not now that he’s set to turn 48 in November. The assembly line of blonde models, from Gisele Bundchen to Kelly Rorbach to Morrone - all similar in terms of aesthetic and, aside from Bundchen, far less famous - are often seen on his arm at awards ceremonies and in paparazzi images on yachts in exotic locales. The relationships themselves are kept low-key, far more so than one would expect from a bona fide A-Lister like DiCaprio, but we’re always made keenly aware when the break-ups happen. DiCaprio gets older but the women remain the same age. You could set your watch to his reliability on this front.

This Leonardo DiCaprio graph where he continues to get older and his girlfriends never age above 25 lives rent-free in my head. pic.twitter.com/bHlhw7Evmg

DiCaprio’s life has been extensively documented by the press since he landed his first Oscar nomination at the tender age of 19. A few years later, he was catapulted to levels of fame that very few people ever experience, thanks to the stratospheric success of Titanic. It’s hard to overstate the sheer force of Leomania and how inescapable DiCaprio was during this time. He was everywhere yet remained a fascinating enigma. The escapades of his bro circle, bluntly nicknamed the Pussy Posse, polluted the tabloids yet DiCaprio remained untainted by any potential scandals. Nancy Jo Sales’ fascinating profile of the Posse in New York Magazine (which I covered in my newsletter, shameless plug time!) delved into the impenetrable loyalty of DiCaprio’s friends. She describes how his close friends — including Tobey Maguire, Lukas Haas, and one guy from Entourage — shield him from the press, sometimes accompanied him to movie sets, and procured women for fun times (also Leo doesn’t tip his strippers, apparently.) They’re described more as babysitters than friends, hype-men who bow to the almighty force of Leomania. They get into fights with paparazzi but DiCaprio is kept safe from scandal. This has been his life for over 25 years.

That extends to his love life too. For someone who is so famous, it’s fascinating how little dirt we have on his relationships aside from his strict age limit. None of his exes wrote tell-all books or did revealing interviews with tabloids. You can’t find a bevvy of quotes from Bar Rafaeli or Toni Pettyfer on what it was like to date one of the last true movie stars in 21st-century Hollywood. It’s long been rumored that NDAs are involved to keep the peace. Gisele Bundchen has talked about him a couple of times (she’s also notably one of the few women he’s dated who was in any way comparable to his kind of celebrity and money-making power.) In 2020, she told Porter Magazine that she felt alone when she dramatically changed her lifestyle to deal with her panic attacks. She said, ‘Was I alone in wanting to do some serious soul-searching while he stayed the same? In the end, unfortunately, the answer was yes.’ It certainly feels like a strong summary of the DiCaprio dating conundrum. Why should anything change if you have the money and clout not to do so, even if that includes the women you romance?

The image of the powerful and wealthy older man with a modelesque much younger wife or girlfriend is one of the most tedious clichés in our exhausting reality. It’s so painfully common an occurrence that it’s long stopped being surprising. Age gap discourse can often be fraught online as legitimate questions about power dynamics and the fetishization of youth bleed into thornier issues of consent and the internet’s current favorite insult of ‘grooming.’ The idea of DiCaprio dating a younger woman isn’t the problem: it’s that he habitually only dates women under the age of 25 and then dumps them when they reach that milestone. Look at the graph! It’s genuinely bananas how punctual this all is. Is this a Logan’s Run scenario? Is he allergic to 26-year-old women? Is there some sort of shadowy contract at play? Because it’s so regular and so predictable, we can’t help but wonder what the hell is going on. This isn’t usual behavior, not even in Hollywood where perennial bachelors with young women hanging from their arms are beloved. Even Jack Nicholson dated women his own age.

It’s taken a while for the questions over DiCaprio’s relationships to dent his public image. He’s so good at keeping everything out of the public eye that we don’t tend to think about him much outside of promotional cycles and awards seasons. Leomania still carries immense power with fans, and DiCaprio remains beloved. He’s that rare actor who only has to make one film every few years (usually with a major director) and it’ll be a guaranteed commercial hit and Oscar contender. Comedians made jokes about his love life at awards shows and he gamely laughed along. I remember writing about DiCaprio’s posse a few years ago and having people tell me not to be too judgmental of his romantic inclinations. Now, it feels like people are more openly derisive of things, as well as mocking in a way that makes it hard for Leo himself to be in on the joke. When people can literally graph out your habit of only dating hot white supermodels until they turn 25, it’s hard to spin that as just a wacky part of your celebrity life.

On one level, I sort of get DiCaprio. He doesn’t seem interested in marrying or having kids. I get the feeling he’s asked about when he’s going to ‘settle down’ as often as every single woman over the age of 23. Perennial bachelorhood is judged less harshly than women who dare not to push out a bunch of offspring before their so-called biological clock stops ticking. There is no shame in wanting to be single, child-free, and separate from the archaic expectations put upon us all. But that’s not the big issue with DiCaprio: it’s the parodic pattern that makes him seem less like a carefree singleton and more like an extremely public example of arrested development. It’s funny and kind of sad. How long can he keep it up? Dare he date a 26-year-old?


← FX\Hulu's 'Archer' and 'Little Demon' Provide Animated Laughs | 'The Rings of Power' Are Beautiful and Empty, But Diversity Is Not the Issue →