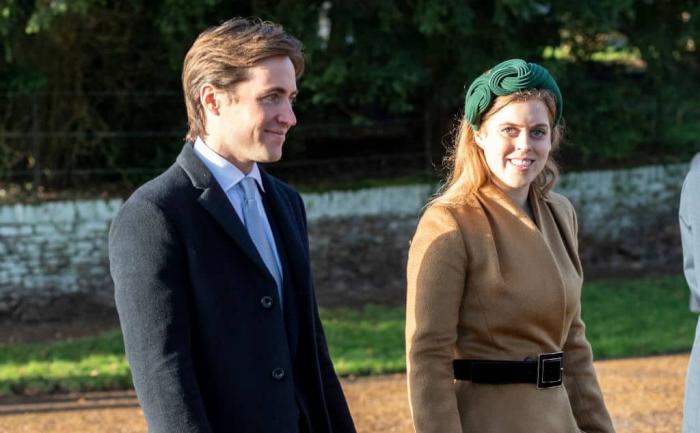 Over the weekend, Princess Beatrice, one of Queen Elizabeth’s eight grandchildren, quietly married her fiancé, property developer Edoardo Mapelli Mozzi, in a private ceremony at the Royal Lodge in Windsor. The wedding was initially scheduled for this May and was set to be a more publicly lavish affair but the COVID-19 lockdown led to a postponement. Instead, the event included a small gathering of guests, all of whom had to adhere to social distancing guidelines, with most of the extended royals nowhere to be seen. All in all, it was a decidedly low-key affair, or at least as low-key as a wedding involving a literal princess in a diamond tiara can get. It wasn’t front page news, you couldn’t watch the ceremony on TV, and there was no parade of celebrities and dignitaries making their way to the chapel in an array of questionable hats.

Beautiful images from Princess Beatrice and Edoardo Mapelli’s wedding yesterday.The bride wore “something borrowed”, a vintage Norman Hartnell dress loaned by the Queen and the Queen Mary diamond fringe tiara Her Majesty wore for her own 1947 wedding. 📷 Benjamin Wheeler pic.twitter.com/Sp9EftEYI7

Of course, that doesn’t mean that the event itself is lacking in things to discuss, or that Beatrice wasn’t making a series of statements on the big day. She’s still a royal, and not only that but the daughter of two of the most controversial and maligned figures in the history of the House of Windsor. The handful of images we got from the wedding and the choices made for viewing by the public reveal the ways in which a young woman had to navigate a strange battlefield on what is undoubtedly the happiest day of her life. So hell yeah I’m going to dissect it all like the hot takes dullard that I am.

As with all celebrity weddings, our attention first falls upon the dress. Beatrice, rather than choosing a big-name designer, wore a gown previously worn by her grandmother, albeit with key alterations made by her trusted dressmakers. She topped off the ensemble with the same fringe tiara that the Queen wore on her own wedding day. The overall effect was one of a very classic princess image, complete with waves of red hair, a big bouquet of Summer flowers, and plenty of extra sparkles. It’s a very old-school ensemble, a throwback to the days when, to put it bluntly, the public were excited to celebrate a minor royal’s marriage. Those days are obviously long gone, especially with the slimming down of the monarchy and the continued drama surrounding the Windsors. With Harry and Meghan off to do royal duties better than the royals and without the courtly conflict, many can’t help but wonder what’s the point of all these superfluous cousins and grandkids. Beatrice’s father, Prince Andrew, notoriously fought for his daughters to be, if not full-time royals, then at least working princesses on the payroll, complete with taxpayer-paid security. That didn’t work out (and neither of his kids seems to mind.) With a tiny private wedding not intended for public consumption — an obvious contrast with her sister Eugenie’s wedding, a dramatic affair that was said to be partly demanded by Prince Andrew — the message is clear: the secondary royals are doing just fine and they’re in control. Not their parents.

What drew most of the media’s attention was what was absent rather than present. The official photograph of Beatrice and Eduardo includes the Queen and Prince Phillip — both standing a healthy distance from the happy couple — but neither Prince Andrew nor Sarah Ferguson were there, even though they were obviously in attendance at their daughter’s wedding. We all know why. They may as well have held up a sign saying ‘my parents aren’t allowed out in public anymore because they couldn’t stop palling around with a pedophile.’ Prince Andrew has stepped away from royal duties while Ferguson, who still lives with him, has veered between acting as his public cheerleader and offering her own vague apologies for accepting money from Jeffrey Epstein. News of the wedding itself wasn’t released until the deed was done and photographs weren’t available immediately. Instead, the focus fell upon the Queen bestowing a knighthood upon Captain Tom Moore, a hundred-year-old former soldier who helped to raise over £32 million for the NHS through a charity walk. A magnanimous gesture on the part of the Yorks, I’m sure, but it certainly didn’t hurt to keep the heat off Andrew for the time being.

Beatrice and Eugenie are stuck in the unenviable position of being the daughters of two derided public figures, one of whom torpedoed his own reputation through bragging about how he didn’t regret being friends with a convicted child sex offender. Remember, Andrew still hasn’t fully collaborated with the FBI on their Jeffrey Epstein investigation despite their requests for him to do so and it seems like he’s going out of his way to avoid even a sliver of accountability. This is a man who has been accused of sexual abuse by one of Epstein’s victims. He was long-time friends not only with Epstein but his rumored collaborator in mass sex trafficking, Ghislaine Maxwell. Every day that Andrew does not come forward, and every day the royals continue to provide him with cover, is another day of shame on an already crumbling institution. I’m sure Beatrice would have liked to have included her mum and dad in her official wedding photographs but she knew that wouldn’t be possible. Her father doesn’t get the luxury of the royal shield on her big day. He can’t pretend that everything is business as usual, even though that seems to be the only way this entitled snob knows how to function.

Crucially, despite the obvious absence of the rest of the Yorks, Beatrice still has the Queen on her side, another sign that her family are always and forever protected by the establishment. Weddings provide a fun distraction but the messaging of them is always clear: The royal family will forever remain on top.

Well, until we get rid of it. Death to the monarchy!