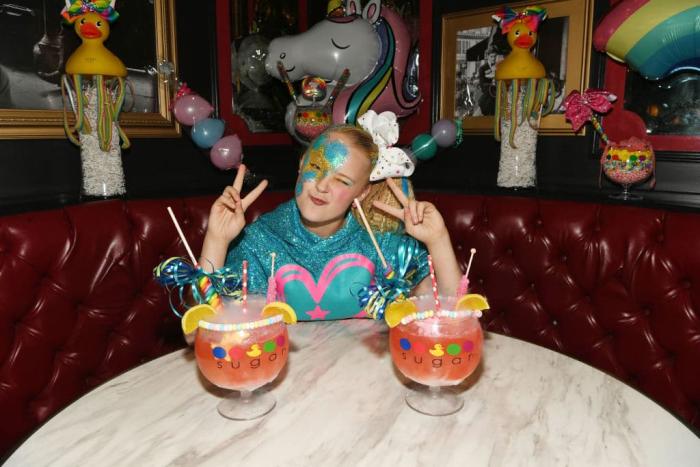 The internet seemed to erupt with shock and awe when Jojo Siwa, the former Dance Moms star and all-round technicolor marketing genius to today’s children, revealed a mini-makeover via, what else, a TikTok video. With a well-edited swipe of cloth against the bathroom mirror, Siwa changed from her rainbow adorned clothes and tightly pulled-back ponytail (complete with one of those bows) into a more laid-back and casual attire. She ended up looking less like a Barbie doll on a sugar high and more like a typical 17-year-old. Social media seemed delighted with the change. Was this a sign that Siwa, who will soon be old enough to vote and get married (but not in her native Nebraska), was ready to age into a more adult image? Those thoughts went flying out the window when Siwa threw herself a birthday party adorned with more sparkles and unicorns than a toddler’s craft day and a Pride parade combined. The theme of the event? Jojo Siwa, complete with merch featuring her face absolutely everywhere.

Siwa is one of those celebrities whose mere presence seems to inspire a shocking amount of ire from literal adults. I’ve seen people old enough to be her parents call Siwa their ‘mortal enemy’ and brag about how much they hate her. Granted, this is dishearteningly nothing new for any young woman or girl in the public eye, especially those slapped with the label of ‘child star’, but there’s something especially pointed about the reactions that Siwa elicits. 21st-century tween and teen celebrities are a different kettle of fish from those of generations past but they are still bound together by common threads, one of them being the oft-dizzying balance between perpetual childhood and overbearing precociousness. We expect these kids who aren’t old enough to drink to be perfectly polished and wise beyond their years but still adorable enough to be the cutesy moppet who needs to teach Vin Diesel a lesson. Nowadays, it seems that the industry is much keener to have child stars, especially young girls, become adults as fast as possible. Think of how Hollywood and her own family have molded Millie Bobbie Brown into a ready-for-adulthood persona via fashion, roles, and business opportunities. Jojo Siwa, however, has gone in the totally opposite direction. There is nothing mature about her persona and it’s worked wonders for her.

Joelle Joanie Siwa, a dancer since she was a toddler, entered the public eye through the second season of the Lifetime series Abby’s Ultimate Dance Competition, which spun off onto the now-infamous Dance Moms. Joelle and her mother, Jessalynn, were characterized on the show as an overtly ambitious mother-daughter team whose on-stage pep was just as aggressively full-on outside of performances. A Time profile of Siwa described them as ‘tacky arrivistes’ who were ‘fun to hate, but also fun to root for’, which feels like as damning an indictment of children-focused reality T.V. shows as you can get in an otherwise glowing piece about a teen star.

After the Siwas left Dance Moms, Jojo leaped into becoming a full-on multi-threat star. She released music, ‘wrote’ books, co-hosted the kids’ version of Lip-Sync Battle, lent her voice to animated films like The Angry Birds Movie 2, and launched a YouTube channel with over 11.2 million subscribers. The lion’s share of her teenybopper omnipresence, however, comes through merchandising. Jojo Siwa gear is as plentiful as Mickey Mouse ears at Disneyland. The Siwa brand can be found on everything in a way that makes even George Lucas’s anything-goes approach to licensing Star Wars merch seem laidback. Siwa has rooms full of her own merch in her impressively large house that she kindly offers tours of on her YouTube channel along with regular reminders that all of these products are available now in stores such as Target, Wal-Mart, K-Mart, and your local dollar store. You want a Jojo Siwa bike helmet? It’s yours. I would suggest not investing in the Siwa-branded cosmetics kit from Claire’s, however, since asbestos is notoriously bad for the skin.

The crowning glory of the Siwa brand is, of course, those bows. Unlike Kylie Jenner’s lips, Siwa’s love of big bejeweled hair-bows is an organic part of her image that can be seen on Dance Moms. It’s a truly rare sight to see Siwa without her bright blonde hair pulled tightly back into a high ponytail and adorned with a bow that wouldn’t look out of place on a Christmas present. Siwa released a line of bows in 2016, which could be found for sale at Claire’s Accessories. Long before I knew who Siwa was, I knew about those bows. They were everywhere in the city I live in. Every girl under the age of 11 seemed to have multiple versions on their hair at any given time. A family neighbor even had a solid side-hustle making her own versions for parents who needed to sate their child’s hunger for this trend. Some schools in Britain even banned the bows for breaking dress code policies and encouraging bullying among kids who couldn’t afford the £8 to 12 retail price per item.

Every business needs a brand and the Siwa empire has one as instantly distinctive as Mickey Mouse’s ears and the Apple logo. Siwa wears these bows all the time, to the point where concern trolling about her hairline and the prospect of traction alopecia is commonplace. Even as she nears adulthood, Siwa is insistent to doubters that the bows are a real part of her identity. She is that loud, she does dress like that of her own free will, she will be herself in the face of the haters, and that ethos is one that comes with a lot of profits.

Talking about a child star of any kind will always leave you on treacherous ground. Given how dehumanizing the corporate ecosystem of entertainment is, it’s painfully easy to forget that these kids are actual kids. Hollywood has never been especially kind to its children either, as decades of history and tragedies can attest to. Growing up in the public eye is a guaranteed recipe for disaster. Siwa stands out as unique because her image is reliant on not growing up, at least not in the manner expected of an adolescent girl in her circumstances. There’s no stylist trying to put her in dresses befitting of a 35-year-old to show how ‘mature’ she is. She’s unlikely to start singing about sex or get cast in a Harmony Korine movie. For now, she is perpetually the tween of her core fanbase, and that’s not something we expect of 17-year-olds in her position. Even Britney was 17 when she put on the skimpy schoolgirl outfit.

What city are you coming to?!! Don’t miss seeing me perform LIVE in concert this summer!! 31 DAYS TILL D.R.E.A.M. THE TOUR!!💕🎉 Get your tickets TODAY at JoJoDreamTour.Com (link in my bio) 🌟

I’ve seen some people celebrate Siwa’s decision to remain tied to this particular brand (and it is a brand, even if she insists that this is her real self without the involvement of hundreds of licensing deals). It’s encouraging, some say, to see a role model for young children, especially girls, whose focus is on brightness and positivity and not having to adhere to the male gaze at such a tender age. There is certainly some merit to this stance given that the entertainment industry’s default mode for young girls nearing adulthood is a countdown clock until it’s ‘okay’ for men to leer at them. The flipside, of course, is the issue of perpetual infantilization. How strange must it be to be nearing voting age but have your livelihood rely on living in a unicorn-themed room and wearing giant bows in your hair? If nothing else, when Siwa does eventually decide to ‘age up’ her brand, it’ll make the contrast between the two elements all the more shocking. Miley Cyrus could never surprise like that.

These issues of infantilizing are made all the more complicated by the fact that Siwa herself is much savvier than her critics assume she is. She has to be if she’s not only the face of so many products but the multi-medium star of screens big, small, and pocket-sized. Watch that video of her merch room and, amid the screeching, you’ll hear the voice of someone who seriously knows what she’s doing. In the Time profile, she proudly declares that she is ‘the first real-life license—the first human, who is not playing a character, to be licensed as a brand.’ That’s obviously not true — hi, the entire Kardashian-Jenner clan and the long, super-creepy history of licensing dead celebrities — but the fact that she takes such joy in this notion is a sign that her business education is expert level.

As a 17-year-old, Siwa is still beholden to the child labor laws of California which only permit her to work six hours a day. That, however, doesn’t apply to YouTube (and boy is it a problem that the law remains so behind the times on this issue?) Siwa’s online presence is vast and extremely profitable, and in this Wild West of entertainment, anything goes. The labor of being a brand never stops, especially in a world where attention spans are near non-existent and keeping up with the latest trends is a full-time job, even for those of us who aren’t shilling pens with our face on them. Siwa works hard to keep a global audience interested, one that is all-too-ready to fire back in vicious ways.

Siwa’s slogan is ‘be yourself’, a well-worn concept that always plays well to kids for obvious reasons, but a philosophy that is hard to live by when you’re a teenage girl who has millions of dollars riding on your brand. It’s tough to claim that Siwa is wholly in control of this given that she is still a child and that’s not how business works, but she is the one who will face the brunt of the pain if or when it all begins to crumble. It’s her face on all those products, after all. Eventually, she’ll be left with her own reality, one free of the demands of 6-year-olds and the 50-something executives of Nickelodeon. What happens then? Does she keep on dancing?

sometimes the worst days turn into the best days! i wasn’t having the best day today and then…. THIS. Miley is the reason why i’m doing what i’m doing today. since DAY 1 i’ve loved her, she has been my inspiration since i was 2 years old. today i met miley and had the best conversation of my life with her. this is a day that i never thought would happen. and now a day that i will never forget. @mileycyrus you are a golden human and i’m so happy that i met you and you we’re so nice! Thank you for being you, you turned my life around today. i love you.💛🤟🏼🎉