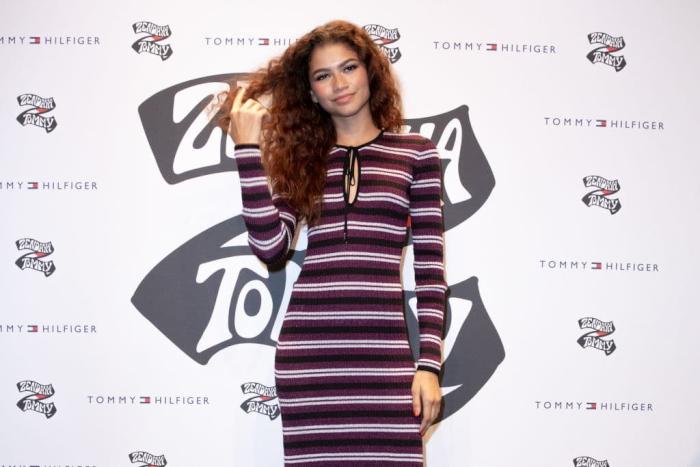 On Sunday, Zendaya turned up at the Critics’ Choice Awards wearing a stunning fuchsia breastplate designed by Tom Ford, paired with a floor-length skirt, and with her hair in long braids. On a pre-event blue carpet jam-packed with sartorial excellence, she still managed to steal the show. It didn’t even matter that the breastplate had already been worn by Gwyneth Paltrow on the cover of Harper’s Bazaar, which is saying something because the fashion world usually balks at the idea of two celebrities wearing the same outfit. Gwyneth may have worn it but Zendaya owned it, everyone agreed.

It’s now commonplace for Zendaya Coleman to be on the top of Best Dressed lists around the world. LaineyGossip even retired her from consideration on such lists because she would inevitably be number one every single time. Coupled with her stylist, Law Roach, she now regularly collaborates with Tommy Hilfiger on acclaimed capsule collections, on top of being the brand’s global women’s ambassador. Not bad for a 23-year-old.

We could be here all damn day listing Zendaya’s greatest fashion moments: Her Joan of Arc look at the Met Gala; the luscious flowing pink dress from the Spider-Man: Homecoming; her suitably over-the-top Moschino butterfly dress at the premiere of The Greatest Showman; and, of course, her camp performance as Cinderella, complete with Roach as her Fairy Godmother, that brought pure Disney kitsch to the pink carpet. Frankly, this post could be nothing but dozens of pictures and it still wouldn’t be enough to convey just how bloody good Zendaya is at the fashion game. It’s not just that she’s stylish or that even the most avant-garde outfits look good on her, although she is certainly a stunning woman who could make a plastic bag look chic. What makes Zendaya stand out from a crowded field of people who do this for a living is that she has managed to successfully wield the power of fashion in a way that has wholly reinvented her career and public image.

When you still believe in MAGIC….

Wearing the right outfit at the right time can do wonders for your profile. Think of how Elizabeth Hurley became a full-on star after wearing that now-iconic Versace safety-pin dress to the premiere of one of her boyfriend’s movies. Geri Halliwell’s teen Union Jack number that she wore when performing with the Spice Girls at the 1997 Brit Awards cemented the group’s status as part of the decade’s Cool Britannia zeitgeist. Bjork’s swan dress signaled a new peak in red carpet strangeness as well as the beginning of the end for experimental spontaneity at such events. Who would Jennifer Lopez be without that dress?

The red carpet is a business and branding exercise. The stars wear lavish and expensive dresses, often gifted to them or part of a contractual agreement with a fashion house, as a mutually beneficial deal that will elevate the profiles or wearer and designer alike. The supposed frivolity of these pre-event catwalks is really the foundation for a multi-billion dollar industry. Getting the right person in the perfect dress can cement your brand’s future. Just look at how Elie Saab was catapulted into the mainstream after dressing Halle Berry in that stunning number she wore when she won her Oscar. Zendaya reminds me a lot of Lupita Nyong’o in the awards season where she won her Oscar for 12 Years a Slave. Here was an unknown actress having her A Star Is Born moment, and lacking big-name recognition to propel her forward with the Academy and the general public, she wielded fashion as her ultimate weapon. Keep all eyes on you and the world is your oyster.

Zendaya and Roach have understood this system better than any of her contemporaries. It’s not enough to be well-dressed: You have to be daring. It helps that Zendaya is stunningly beautiful and has the kind of figure that the fashion industry loves to design for, but where she remains head and shoulders above other celebrities her age is in her willingness to go big and get weird. The red carpet has gotten a lot safer over the past two decades, in large part because so much money is on the line and it seemed as though the cruelty of Joan Rivers and her Fashion Police would be too much to bear. That’s led to a lot of very samey red carpets and awards shows defined by unmemorable elegance. Actresses tend to find a look that works for them and stick to it. Zendaya can do elegant but she can also do daring and weird and sultry and powerful and kitsch and so much more. Not only can she pull it all off but she’ll wear it with the confidence of someone who’s been doing this for decades. There’s an outfit for every occasion and theming is a big part of her world: Consider the stunning black and red sequined Armani Prive number with matching Louboutins that she wore to the premiere of Spider-Man: Far From Home: A gorgeous, event-appropriate dress that was fun, vibrant, young, and also a homage to Spidey himself. She steals the show while sending the desired message about whatever she’s promoting or celebrating. That’s no mean feat.

If she was Spider-Man this would be her suit….. wearing Armani Prive @armani and @louboutinworld

She’s no stranger to nasty fashion-related nastiness either. E! host Giuliana Rancic tried to go full Joan Rivers by claiming Zendaya’s dreads, which she wore to the Oscars, looked like they smelled ‘like patchouli oil and weed.’ Remember, at the time, Zendaya was 18, and still best-known for being a Disney Channel star. E! and Fashion Police always punched down, but this instance was especially nasty in its racism and misogyny. Zendaya’s response was sharp, unapologetic, and took no prisoners, and Rancic eventually apologized (although she later walked it back and claimed the edit did her in.) The incident spoke to one of the great difficulties Zendaya faced in the racist industries of both entertainment and fashion as a young black woman. Since then, Zendaya has made her hair a key part of her style agenda, wearing it in various styles and in ways that you often don’t see in a sea of white blonde women in the same black cocktail dresses. She’s also done the work of fashion inclusivity, putting some of the great icons of black style and modeling to the forefront with her gorgeous Hilfiger collaboration.

Fashion and the expectation of style greatness has helped to cement Zendaya as a major star, lifting her into the realms of adult celebrity after years as a child star under the often restrictive thumb of Disney. Child star transitions are often messy and emotionally tumultuous, especially since young women are typically advised that the only way to show how super grown-up you are is to immediately become a sex kitten. Zendaya showed her growing maturity through fashion but never felt like she was dressing above her age (for a sharp contrast, note how whoever dresses Millie Bobby Brown seems convinced that the teenager is aged between 25 and 45 with those clothing choices.) She didn’t simply remind Hollywood that she was no longer a child star: She exhibited her mature understanding of how to use fashion to project her potential to the business. She can be cute and sophisticated and retro and daring and whatever else you throw at her. She’s got the range.

All of this explains a lot of why Zendaya has ruled the red carpet, but the fundamental fact in her favor is a simple one: She’s clearly having an absolute ball doing it all. She’s enjoying herself and embracing the fun of what is often a monotonous and grueling process and it shows in every outfit she wears. Roach and another former client, Celine Dion, showed similar zest with their red carpet revolution. Audiences have a primal desire to see their celebrities looking good and feeling themselves, and Zendaya’s currently the queen of that. Long may she reign.

← From the SAG Awards: 10 Actors And Their Lesser Known Significant Others | In the End, Abby Huntsman Just Wasn't Toxic Enough for 'The View' →