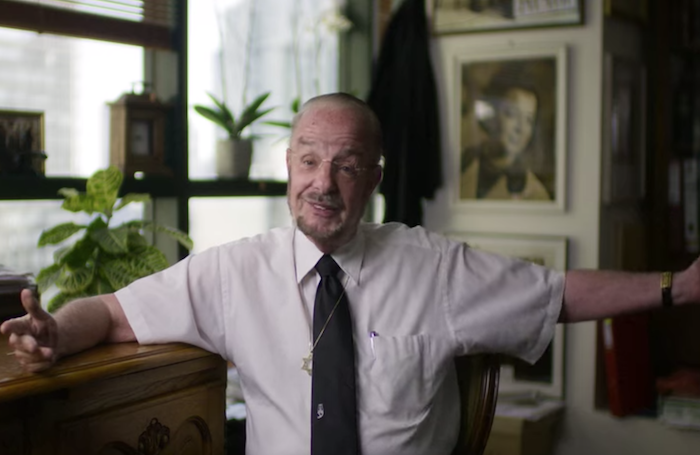 If you haven’t seen Netflix’s The Devil Next Door, about Nazi War criminal John Demjanjuk (note: he was convicted of his crimes in Germany, but is technically, legally innocent, due to his death before his appeal could be heard) you may not be familiar with who Yoram Sheftel is. Consider yourself lucky. If you did watch the series, followed the trial in real-time, or live in Israel now, you are probably, unfortunately, all too familiar with Sheftel, who by all accounts seems to be a loathsome human being who thrives on negative attention.

I specifically didn’t get into Sheftel’s f*ckery in the initial review because it would have been 5,000 words long, 4,500 of which would have been varying insults towards him. This is a man who gleefully defended a Nazi war criminal, not because he believed in his innocence, or wanted to make sure that he got the best defense possible so that his conviction would be solid and without doubt—but because he enjoyed the attention it got him.

To briefly recap, throughout the doc, Sheftel barely hid his delight at the notoriety the case gave him (and still gives to him). He went on as many contemporary talk shows that would book him to publicize himself (and later on, the multiple books he wrote about the case). At one appearance while the trial was still going on, Sheftel took a lie detector test and was asked if he believed his client was innocent. He said yes, it was determined that was a lie. Sheftel’s response? He just shrugged it off. I’m sure the outrage got him more attention the next day.

The personal satisfaction he displayed in getting a war criminal vindicated after he was convicted by the judges of his case, after numerous survivors came forward and positively identified Demjanjuk as the perpetrator of horrendous torture, was extremely hard to stomach. There was no higher cause behind his actions other than to raise his own profile. To use a war criminal accused of unspeakable horrors at a Nazi Death camp to do it boggles my mind.

Anyway, if you’ve come here in the hopes that Sheftel has devoted his life towards making the world a better place since then, you are going to be sorely disappointed in him, and possibly humanity. No, since the trial Sheftel has only, well, been himself.

Let me get you up to speed. I’ll start with the most recent bulls*it.

Sheftel was suspended from a radio station last week for repeated, abusive language towards callers. Per the Israel National News:

After a number of times Shetfel spoke to callers into his show in inappropriate or harsh language, the radio channel has decided to suspend him, pending a hearing. According to reports by the website Ace, Sheftel told callers to “shut his mouth,” and calling another a “liar.”

Not the first time his behavior on the radio have been called out. In 2012, he pulled similar moves, per Haaretz:

The show also includes verbal attacks against Arabs, often comparing them to Nazis and animals. On one broadcast, he said that “the Arabs’ wet dream is a mid-air explosion of a plane leaving Ben-Gurion Airport, preferably an El Al plane.”

Tell me if this sound like a page pulled from an American-homegrown a*shole’s handbook (talking about Trump, here) by attacking the media (note, he was Trump before Trump, because this happened in 2012):

As for the type of clients Sheftel takes on, you will not be surprised to know he’s still fishing from the same, toxic pool.

One of his recent high-profile cases is that of Elor Azaria, who was convicted of shooting Abdel Fattah al-Sharif, a Palestinian man, in the head. al-Sharif had stabbed an Israeli soldier, and as a result was shot and wounded by Israeli forces. al-Sharif was lying on the ground, wounded, and “not posing a threat” when Azaria shot al-Sharif in the head, killing him.

After Azaria was convicted, he asked for leniency in his sentencing (he would ultimately only serve 9 months in jail for his crimes) and Sheftel was there to Sheftel all over the request to the press.

Per the Times of Israel:

Azaria’s attorney, Yoram Sheftel, noted in a statement that the former soldier “did not express regret” in his letter. However, the lawyer said that “in the chief of staff’s public statement this week he never made a request for leniency dependent upon an expression of regret.”

Sheftel is there, naturally, to point out his client isn’t sorry, but it’s OK since the judge didn’t explicitly ask Azaria to be sorry in the first place for killing a man and ending his life, so let’s go easy on the guy anyway. It boggles the mind.

Yoram Sheftel is a man who has built a life, and a career, around defending people accused of horrific crimes. It appears that he does this not because he believes in the value of the justice system and that everyone deserves the best possible legal counsel they can find, but because the more loathsome the person on trial, the more attention and notoriety gets heaped on Sheftel. He is in it for himself and doesn’t seem to care that his career is literally built upon the deaths of millions of Jews in the Nazi death camps.