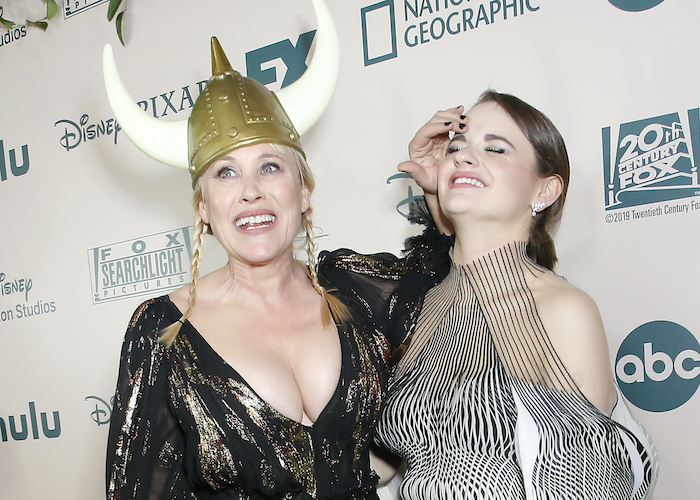 If you didn’t watch The Act, you should, go do it! You might like it! More to the point though, if you’re unfamiliar with the show Patricia Arquette won a Golden Globe for last night, what I’m about to share is going to be missing some context. The Act, based on a real story, was about the abusive relationship a mother (Dee Dee) had with her daughter (Gypsy Rose), played by Arquette and Joey King, respectively. In a real life-imitating-art moment, while Arquette was celebrating her win with her TV-daughter, she inadvertently smacked her in the head with her award. Since this is Hollywood, naturally it was captured on camera:

(Wait until the end, right as the doors close, you’ll see poor Joey King get smacked square in the forehead.)

Unlike what happened in The Act, this was clearly an accident. Arquette moved her award up as King moved her head down to take a bow and bam! Right in the kisser. If you winced to yourself in solidarity, because it looked painful, you were right. That left a mark, friends.

How do we know? The mark was captured on camera, too!

Patricia Arquette accidentally hit me in the head with her Golden Globe. That sentence will give me bragging rights for the rest of my life. @PattyArquette pic.twitter.com/lQDewQpa1C

Joey King is taking it in stride. Honestly, if Patricia Arquette banged me in the noggin with her Golden Globe, I’d probably use that as an excuse to ask her to dogsit any time I was out of town, until the guilt wore off, because you know she probably feels really bad and also, kenneling your pup is very expensive.

You might be wondering how I know she feels bad. Well that sentiment, too, was captured on social media. Come on, we live our lives performatively now. Of course it was!

The irony of the situation was not lost on Arquette, either, invoking the name of Dee Dee in another Tweet.

A moment of infamy. @joeyking It wasn’t me. It was the ghost of DeeDee https://t.co/dhZ4KK9KZE

I kind of hope she keeps commenting on the situation, because her gif game is on point, here.

Anyway, so endeth The Act’s season 1 awards run… no word yet on a season 2, but it seems Arquette is doing her damndest to create new material for the series.

← Why is Chet Haze, AKA Chester Hanks AKA Tom Hanks and Rita Wilson's Son, Like This? | Kate Becksinale Goes Home with One of Pete Davidson's Best Friends After The Golden Globes →