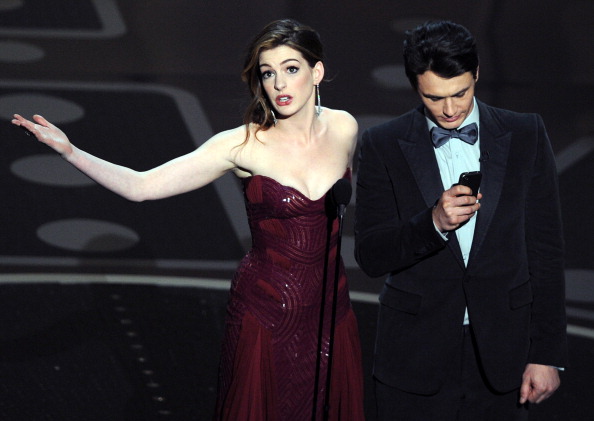 It’s been a decade since the disasterbacle that was the 2011 Oscars, which were hosted by James Franco and Anne Hathaway (although, even that disaster was at least more interesting than the host-less awards ceremonies of late). For those of you who missed it or don’t recall, James Franco behaved like James Franco while Anne Hathaway behaved like Anne Hathaway. It was not a good combination. As David Wild, a writer on that telecast described to The Ringer, “It was like the world’s most uncomfortable blind date between the cool rocker stoner kid and the adorable theater camp cheerleader.”

I think that description underplays what really happened, which was that Franco hung Hathaway out to dry, and the harder she tried, the less Franco seemed to care. She wanted to be a good Oscar host. Franco thought he was too cool to be a good Oscar host. Hathaway had to carry his ass, and Franco was too oblivious to or didn’t care that she was doing all the work while he figuratively sat on the couch, smoked pot, and ate Lays potato chips. Or, as writer Jordan Rubin told The Ringer:

By the time the two showed up and started filming, their personality differences were palpable. “She showed up ready to play and committed 110 percent,” he says. “And he was a great guy but often looked like he had just woken up from a nap. It’s almost like you’re showing up to a tennis court and one person decided that they were going to play in the U.S. Open and the other wanted to play in jeans and just kind of hit a few balls.”

While they weren’t contentious, the chemistry between the two never really gelled, either, according to Rubin. “Again, this is a memory, but [she] was like ‘Maybe you should try that,’ and he was like ‘Don’t tell me how to be funny.’” he says.

“I think he wanted to play it as buddy-cop movie with two opposite characters,” Rubin added, but that dynamic never came to fruition.

“There was a moment the night before the show when we were in the production office in some level of panic,” Wild told The Ringer. He looked at the closed-circuit TV in the corner and saw James grinning at the person next to him. “I thought ‘Oh boy, they’ve finally broken through and he’s looking at her!’” Alas, the camera soon turned and Wild’s heart sank. “Anne had gone to her dressing room for a minute,” he says. “James was smiling at her stand-in.”

In the post-mortems since, Franco seems to mostly blame Hathaway, while Hathaway — naturally — also blames herself. “You know how sometimes your optimism tips into delusion and you’re just like, ‘If I’m just really, really nice to everybody, everything’s going to work out?’ It did not work,” Hathaway told Hugh Jackman during a Q&A last year. Franco, meanwhile, suggested that he only looked stoned relative to the high-energy Hathaway. “I love her but Anne Hathaway is so energetic,” Franco once told Letterman. “I think the Tasmanian Devil would look stoned standing next to Anne Hathaway.”

For the record, Franco was not stoned, according to the writers. That may actually be worse because then it suggests a more deliberate kind of sabotage. Interestingly, however, Franco was not their first choice. Another guy who once hung his co-performer out to dry was: Justin Timberlake. He, however, ultimately declined, reasoning that he wanted to wait until after he got an awards circuit round under his belt before he hosted (Timberlake did the rounds with The Social Network that year).


← Though It's Not a Competition, Steve-O Has Just Won 'Hot Ones' | Review: 'The Banishing' Slips Down A Rabbit Hole Of Folk Horror Scares →