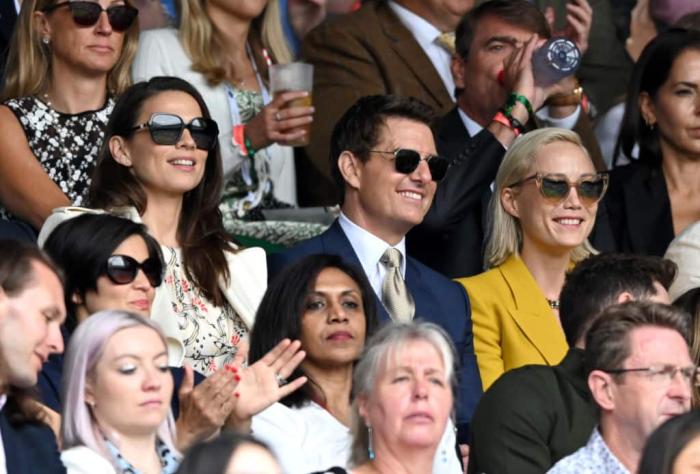 So Wait, Are Tom Cruise and Hayley Atwell Actually Dating?

Way back in the prehistoric times of December 2020, The Sun reported that Tom Cruise had become ‘fairly inseparable’ from his Mission: Impossible 7 co-star Hayley Atwell. According to the tabloid’s ‘source’, the couple ‘both seem pretty happy’ and that ‘lockdown, and all the difficulties that came with it, brought them even closer.’ It was a vague story, at best, one that seemed to fizzle away pretty quickly. It’s not that people weren’t interested in the gossip but more that they didn’t really buy it. Similar vague rumors of a romance between Cruise and another co-star, Vanessa Kirby, came and went without much fuss a few months beforehand. To many members of the movie-going public, Cruise stopped being a viable heartthrob leading man around the time that he jumped on Oprah’s couch and lambasted Brooke Shields for using antidepressants.

But wait. The story isn’t over just yet. This weekend, the gossip was reignited as Cruise was seen attending Wimbledon with Atwell. Newspapers like Page Six made sure to emphasize how cozy the pair seemingly were, with that publication claiming… well, actually they didn’t claim much of anything. They just echoed the quotes from that mysterious source who spoke to The Sun. The actors, aged 59 and 39, ‘hit it off from day one.’ They’ve been inseparable, even during lockdown and the troubles surrounding the M:I7 shoot. That’s really it. Not much to hang a story on but hey, gossip’s been spun from far weaker assumptions, as has PR meddling.

One of the reasons that people didn’t buy Cruise and Atwell in December 2020 was because the story was pushed out so soon after Cruise was caught screaming at crew members regarding COVID-19 restrictions. While some people applauded Cruise for his seeming dedication to his work, most found it inappropriate and creepy and yet another reminder of Cruise’s fervent devotion to a so-called religion with an insidiously exploitative reputation. It exemplified a big problem for Cruise as a star in the 21st century: it’s hard to sell him as relatable or even vaguely normal when he’s long given up trying to maintain such a persona. Nowadays, Cruise typically sits out revealing interviews or profiles and plays up the idea of his daring stunt skills and invincibility as an action man. That doesn’t leave much room to be a romantic type. Indeed, his films of late have either seriously downplayed the expected love story subplot or dropped it altogether. I don’t know about the rest of you, but I have trouble seeing Cruise play a suave lover without thinking about the treatment of Nicole Kidman and Katie Holmes and Nazanin Boniadi. If you’ve read Going Clear, the first image that enters your head when you think of Cruise looking for a woman is of Scientology allegedly vetting Boniadi to be his girlfriend then punishing her for a minor perceived slight.

That’s what makes this current story so curious to me. Cruise’s team, if they are dead set on selling this ‘romance’ with Atwell, are working against the current. Atwell certainly seems like a solid choice for the role (and let’s be honest here, it is a role.) She’s beautiful, talented, keeps her private life to herself and is no longer on Twitter, and she’s not under 30. There’s still that 20-year age gap but being closer to 40 than 25 does make a difference in terms of that public perception. Can you imagine how much more skeptical we’d be of this story if Cruise were rumored to be dating, say, Margaret Qualley? Celebrity power couples tend to work best when the pairing is well-balanced, be it in terms of fame, career goals, or aesthetics. That’s hard to apply to Cruise given how ridiculously famous he is. What woman could be on that level? Any who are probably wouldn’t bother with the hassle.

There’s also another big problem with this story. See those couple-esque images of Cruise and Atwell? They’re cropped. They didn’t attend Wimbledon alone. Look at the full image and you’ll see another Mission: Impossible 7 co-star, Pom Klementieff. Hell, go on Getty Images and you can also get images of Cruise and Klementieff where Atwell is cropped out! Choose your own adventure! Of course, we know which story the tabloids are going with and why. Read that Page Six piece again and notice how Klementieff isn’t mentioned, not even once. You can see her in one of the photographs but unless you knew who she was and that she too was working on Mission: Impossible 7 with Cruise, you’d think she was just a random spectator. Subtle stuff, Page Six.

This isn’t a confirmation of a relationship, but it isn’t a denial either, and neither Cruise nor Atwell’s teams have issued any statement to the contrary. It’s vague and could go either way but the mere possibility of it being out in the open is doing the work. Maybe Agent Carter’s just deep undercover trying to take down David Miscavige. Perhaps Scientology needs a new spin. Or it may simply be that Cruise and Atwell had a fling, although that option seems to be the most unbelievable to the masses. Whatever the case, it’s fascinating to note how even someone as obscenely rich, famous, and shrouded in strangeness as Tom f**king Cruise still needs the tabloids.