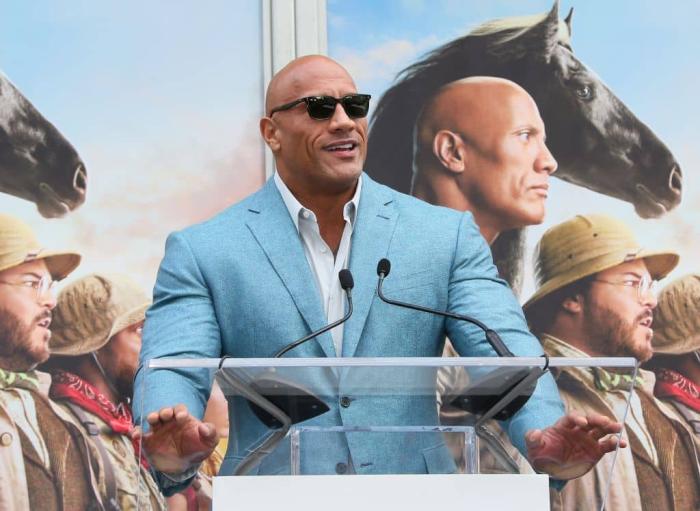 So Does The Rock Actually Want to Be President?

In a cover piece from a recent issue of People, Dwayne Johnson was celebrated as one of 100 reasons to love America. The actor who shall forever be known to the world as The Rock was praised for his Hollywood domination, his growing business empire which includes a production company and the prerequisite celebrity alcohol brand, and his ‘blessed’ life as a family man with three daughters. Johnson’s been a People favorite, having been crowned the magazine’s sexiest man alive in 2016, and he’s embraced the cozy, appealing-to-all kind of image that has revived his celebrity in ways that not even the WWE could have predicted. Of course, the prospect of Johnson running for President came up. It’s been a running theme in Johnson interviews for about five years now, certainly since Donald Trump was elected. People even quoted a poll that found that 46% of respondents would support a Johnson Presidential bid. In response, Johnson said, ‘when 46 percent of Americans say they’re in favor of me becoming president, that forces me to humbly and respectfully stand up, listen and learn.’ Even though he says that he is ‘not a politician’ and ‘quite frankly I’m not sure I even have the patience or resignation to deal with the B.S.’, he doesn’t say no.

It seems that Johnson is only too happy to play up the gossip, remaining coy whenever asked about the possibility of a Presidential run yet never fully denying his ambition. Even his semi-autobiographical sitcom, Young Rock, is framed around a timeline where he’s running for President in 2032! It’s a familiar checklist, one used by every politician with dreams of occupying the top office in the country. Check out the rollout we see with practically all candidates: the softball talk-show appearances, the magazine covers, the ghost-written book with some vague title about overcoming obstacles or fulfilling your dreams, all while never fully confirming that which has now become inevitable.

It’s curiously rare for people to just say outright that they want to run for President (which was partly what made it so striking when Stacey Abrams admitted that she did.) With the doors now open for every individual with the vaguest sheen of popularity and public recognition now throwing themselves into the political ring, watching Johnson participate in this narrative isn’t exactly a surprise. Still, there is something kind of fascinating about how long this hemming and hawing over a political move for Johnson has stuck around for. People have been asking him about this for years. I’m pretty sure Idris Elba was asked less about being James Bond than Dwayne Johnson has been asked about running for President.

But does he actually, you know, want to be President? Does Dwayne ‘The Rock’ Johnson truly want to give up the sweet life to be a dignitary and crawl through the sewers of D.C. deal-making? And really, do people actually want him to be the commander-in-chief?

It’s tough to gauge what Johnson’s politics actually are. The activism and philanthropy section of his Wikipedia page is weighted more towards the latter than the former. He voted for Barack Obama in both 2008 and 2012 and endorsed Joe Biden last year but admitted to sitting out the 2016 election. Explaining his decision to Rolling Stone, he said, ‘At the time, I just felt like it was either vote for the [candidate] I thought would make a better president than the other, even though I would rather have someone else, or not vote at all. I wrestled back and forth with it.’ In the same piece, he expressed support for the March for Our Lives protest in support of gun control measures, calling it ‘powerful and emotional. But like with anything, we’ve gotta have people who will meet them in the middle.’ The story seems to have its origins in an op-ed by The Washington Post from 2016 that suggested Johnson as a truly viable candidate (remember, this is the election he didn’t even vote in.) When asked about it by Caity Weaver in a GQ profile appropriately titled ‘Dwayne Johnson for President,’ he solemnly said, ‘I think that it’s a real possibility.’

It’s all a bit mealy-mouthed, devoid of details and anything that could ever be misconstrued as an opinion. Maybe that’s the point. How do you remain universally beloved for as long as he does? You don’t rock the boat. That doesn’t mean you have to avoid politics altogether or pull the kind of faux centrist smarm that some have made their bread and butter (hello, Chris Pratt), but there’s a reason that even many more outspoken celebrities keep their noses out of truly provocative or controversial issues. Remember Mark Ruffalo’s backtracking over what happened in Palestine? It’s a rare thing to see a major celebrity commit to tangible and often prickly political stances and remain unchanging throughout the years and decades. It’s one of the reasons Jane Fonda is such an icon, and even she had one or two infamous mistakes to atone for.

Johnson is an immensely savvy celebrity. He’s easily the most successful actor to emerge from the wrestling scene and he’s solidly staked his claim at the top of the Hollywood pile. His films make lots of money, he’s naturally charismatic and appeals to various demographics, and he avoids drama. Aside from his semi-feud with Vin Diesel, he’s slyly sidestepped the kinds of gaffes and tabloid fodder that could easily engulf his persona. Hell, he’s still best friends and business partners with his ex-wife. Dude knows what he’s doing. So why complicate that with politics? Even the vaguest of opinions would open him up to scrutiny, bad faith or otherwise.

Truly, I think people are less enamored with the reality of a Johnson Presidential than by the imagined Hollywoodized version of such a future. Johnson has the perfect story for a rags-to-riches happy-ever-after that would end with him putting his feet up in the Oval Office. Having grown up in a poor household and dealt with numerous arrests while still a minor, he found wrestling and remolded himself into the ultimate showman, using the platform of the WWE to shoehorn his way into the movie industry and the world’s hearts. The dream always eclipses the truth, which is that Johnson running for President would be a disaster. He wouldn’t be able to retain his iron grip on his persona and the public adoration of him. Eventually, he would say something stupid or throw his lot behind an utterly ridiculous policy. Where’s the glory and PR glow of having to wade into topics like gun control or reproductive rights? Fans don’t want Dwayne Douglas Johnson to be President: They want Luke Hobbs to storm through the White House on a flaming car while he flips the bird at Vin Diesel.

And then of course there’s the other elephant in the room. Johnson has never said which party he would align himself with for a Presidential run. Surely, he realizes that he would need to make that call at some point? Even if he wanted to be an Independent, he would need to pick sides on basically everything, such is the pain of the two-party system. This is why I don’t think he actually wants to run. He prefers the buzz of potential, of the idea that he totally could run if he wanted to because look at those poll numbers and listen to how excited some folks are by the possibility. But it’s all just that: a possibility. When it’s a certainty, it becomes way less fun.