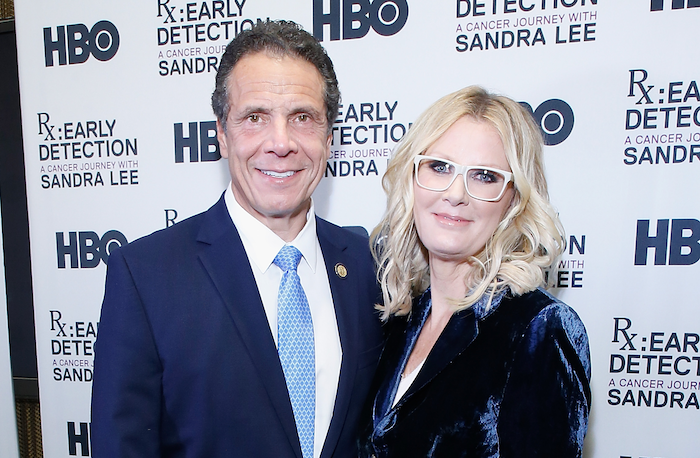 Sandra Lee is nursing a broken heart tonight. She broke up with her long-time lovah, New York Governor Andrew Cuomo, so I imagine she’s feeling a bit tender at the moment.

People.com has the scoop:

Though Lee shot down rumors in May after she sold the couple’s New Castle, New York mansion, the couple officially announced their split on Wednesday in a joint statement. “Over the recent past, we have realized that our lives have gone in different directions and our romantic relationship has turned into a deep friendship,” they said. “We will always be family and are fully supportive of each other and dedicated to the girls. Our personal lives remain personal and there will be no further comment.”

Look, breakups are hard for basically anyone, it doesn’t matter if you’re the governor of New York, or, say a lifestyle television personality—when love goes wrong, nothing goes right. Just ask Marilyn and Jane, who will reiterate exactly what I just said, only with a kicky song and dance routine:

You do what you gotta to get through this—and right now, I think when the break up is still fresh, Sandra Lee should engage in some comfort food. Specifically, her Kwanzaa cake.

You remember her Kwanzaa cake, don’t you? That delicious, heavenly combo of store-bought angel food cake, chocolate and cinnamon frosting (made from a can), store-bought apple pie filling, and topped with a sinfully delicious smattering of pumpkin seeds and “acorns” (which is what Sandra Lee calls Corn Nuts.)

…and what better to wash her Kwanzaa cake (and heartache) down than with one of her signature drinks, because it’s always cocktail time!

I recommend she make Passionate Dream, which is equal parts juice and vodka, as long as you’re using 4 types of vodka and only 2 types of juice:

Surely cinnamon chocolate corn nut cake, and vodka with a splash of juice not only go well together but will also take the sting out of a love lost.

If that doesn’t do the trick, I’d recommend just drinking more until texting your ex starts to seem like a good idea. I mean, it’s never worked for me in the past, but it’s gotta work for someone, right?

← Tekashi 6ix9ine Was Moving Into The Witness Protection Program, But How Could He Hide? | The Whistleblower Complaint and The Latest on the Impeachment of President Donald Trump →