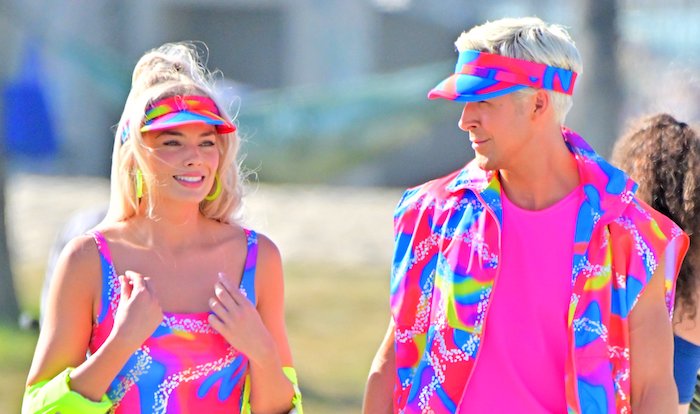 Ryan Gosling, in Netflix’s Gray Man coming later this summer, is currently filming the wild Barbie movie with Margot Robbie. There’s also been enough behind-the-scenes pics and videos from the set taken by the paps to practically spoil the film.

The t-shirt he wore to set recently spoils nothing about the film, which features him playing “a fake person” with platinum blonde hair and possibly no genitals. The shirt, however, is a reminder that the film also stars Ncuti Gatwa, and if you don’t know that name yet, you soon will.

The Sex Education star is set to play the new Doctor Who and in honor of his selection — and presumably to support a co-star — Ryan Gosling was recently spotted wearing a fan-designed Doctor Who t-shirt featuring Gatwa as the Doctor.

As worn by Ryan Gosling! Sold by the artist!

I've added my Ncuti Gatwa piece to Redubble, with watermark as worn by Ryan. As I don't own everything in the image approximately 50% of the proceeds I will make will go to The Goboka Rwanda Trust.https://t.co/Yx3nYQlno0 pic.twitter.com/tDjGeYXZIX

The BBC has since taken away our opportunity to own the t-shirt (at least for now), but that hasn’t stopped giddy former and forthcoming Who showrunner Russell T. Davies from freaking out about Gosling’s shirt over on Instagram.

It’s pretty cool, especially knowing that Gosling himself — aside from presumably being friends with Gatwa — is a low-key fan of Doctor Who himself.

← 'Ticket to Paradise' Trailer: George Clooney, Julia Roberts Star in an Old-Fashioned Romcom | 'See How They Run' Trailer: Saoirse Ronan's Stars in a 1950s Caper for Her Latest Period Piece →