Ricky Gervais Is A Transphobe?

Comedian Ricky Gervais took to Twitter to promote transphobia over the weekend. Here’s how it went down.

In response to J.K. Rowling’s transphobic tweet from last week, a satire piece was penned by Jarvis DuPont mocking trans people and Harry Potter fans for being bothered that a white cis-woman who made her fortune on writing books that denounced bigotry proudly came out as a bigot. For some sense its tone, here’s the subhead: “The thought that I will no longer be welcome in a fictional school for wizards has destroyed me.”

In response Dupont’s tweet of the post, Gervais responded with, “Those awful biological women can never understand what it must be like for you becoming a lovely lady so late in life. They take their girly privileges for granted. Winning at female sports and having their own toilets. Well, enough is enough.”

Those awful biological women can never understand what it must be like for you becoming a lovely lady so late in life. They take their girly privileges for granted. Winning at female sports and having their own toilets. Well, enough is enough.

Then, he seemed to doubled down.

Exactly. We need to protect the rights of women. Not erode them because some men have found a new cunning way to dominate and demonise an entire sex.

Many responded to Gervais’s tweets. Some with support (of transphobia) some with outrage that he’d take the platform of his popularity to punch down at a group that is marginalized and demonized by TERFs and transphobes. Some suggested the comedian was kidding, as he was responding to a satire piece to begin with. Gervais leaned into this perspective with the following exchange: 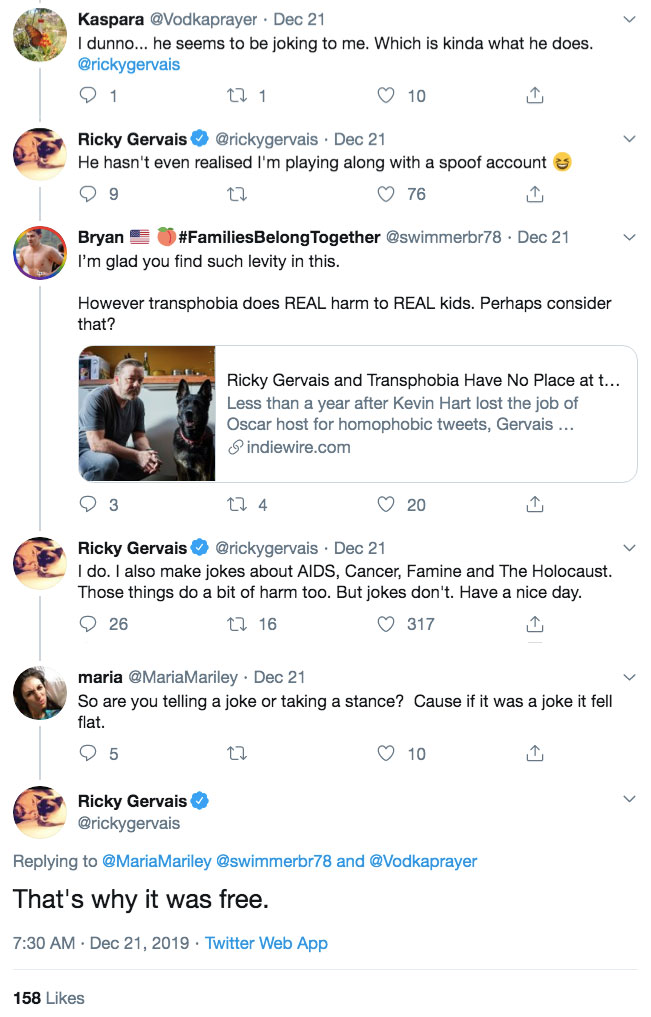 Hours later, Gervais seemed like he was trying to put the matter to bed with this tweet:

Sure. I think trans women are women. I wasn’t talking about trans people 🙏

So, was he misunderstood? Or was he scrambling to kill this controversy before it gained steam?

Here’s some food for thought.

Last winter, after it was announced Kevin Hart would be hosting the Academy Awards, Twitter users brought to attention his long litany of homophobic comments. This lead to an ongoing scandal where Hart refused to apologize, claimed he was being bullied, and quit the Oscar gig.

Did he perhaps fear that such a dust-up might cause him to lose that high-profile gig for an arguably higher-profile firing? If he thought there was the chance of that why tweet anything vaguely bigoted right now? Is it because he thinks he could get away with it? That social media wouldn’t turn up for trans people as they did gay people last winter? Or, is this rich, white, cis-man a true ally who just loves jokes, even when they are lazy, offensive, and punching down?

← Eddie Murphy Closes Out the 2010s with One of the Best 'SNL' Episodes of the Decade | Box Office Report: 'Star Wars: The Rise of Skywalker' Delivers $175.5m Debut; 'Cats' Flops →