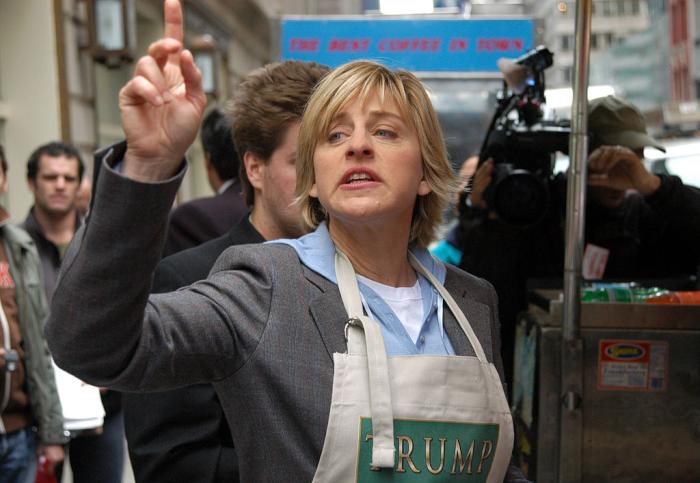 Remember That Time Ellen Degeneres Bought The Trumps a Literal Golden Baby Stroller As A Present?

Of the rich and the faaaamoooooussssssssssss!

So went the urgent clarion call for drastic re-distributive action that those prophets of class rage, the band Good Charlotte, tried to get us to hear, all the way back in 2002.

We didn’t listen, and now look where we are. We’re sorry, Joel Madden, we should’ve heeded you!

Hey you know what else was happening in the early-to-mid-2000’s?

The Trumps were busy welcoming Barron Trump into the world by—naturally—doing a photo spread for People magazine. A photo spread that has recently resurfaced thanks to some folks on Twitter who have noted a particular name cropping up in it:

Also from the People article: “Says Donald, ‘I love to feed the baby. Not because I have to, but just because I love it.’” 🙄 https://t.co/IkoWZCZHWK

oh the treasures you find in the comment section!

While Ellen has made a show of being in opposition to Trump, even publicly refusing to have him on her show…

Ellen DeGeneres gave Donald Trump a golden stroller with a chandelier when Baron was born.

You’ll recall of course that this is the same Ellen who got into a bit of hot water after she was seen palling around with noted jovial war criminal George W. Bush at an NFL game, after which she ‘apologised’ [citation needed] by saying that, hey, it doesn’t matter if our friends have different views on things, we should always be strive to be civil, and cordial. Like who cares if your mate has committed the occasional racist war crime? Is that really worth sacrificing good times at sporting events with them?! It’s thinking like that that causes all the war crimes in the first place and you should feel sorry for the people who can’t take a higher road.

After that Bush debacle people also took Ellen to task for comments made in 2017 in which she strongly suggested that Donald Trump would never appear on her show as he so strongly represented all the things to which she was opposed.

And. Jesus, isn’t rich white privileged liberalism exhausting? How do you even begin to unpack all of its hypocritical bullsh*t? We should’ve listened to Good Charlotte when we had the chance.

I’m tired. I’m gonna leave this here with a quote from my esteemed colleague and poet, Emily Chambers, with her singular Greek chorus addition on the golden stroller situation:

‘Can you make sure to add that it’s ugly as sh*t?’