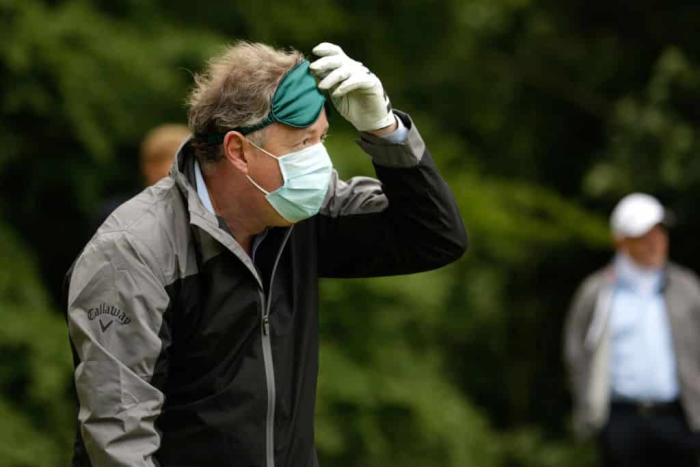 Piers Morgan is a nasty piece of work. He always has been. Yet somehow the disgraced former tabloid editor has repeatedly wormed his way back into major media positions despite his endless stream of bigotry, lies, and straight-up smarm. For the past couple of years, his preferred target of choice has been Meghan Markle. He claims that the two of them were on the verge of becoming BFFs until she ghosted him when she started dating Prince Harry. Since then, he’s launched endless barrages of abuse at her. Yesterday, on Good Morning Britain, he spent a lot of time not only attacking Markle for the Oprah interview but outright denying her claims that she felt suicidal during her time as a senior royal. Yup, nothing like a bully with a massive platform calling you a liar over your mental health to remind you of how awful this trash island can be. Of course, this morning, Morgan also invited Meghan’s sh*tty father on TV to deny that she’d ever experienced racism. Morgan and Good Morning Britain have been instrumental in allowing Thomas Markle to continue his reign of terror over his daughter.

Finally, however — f**king FINALLY — one of Morgan’s own colleagues called him out. Alex Beresford is a TV presenter and weatherman who has worked for the network ITV for pretty much his entire career. Today, he’d clearly had enough of Morgan and stepped up to the plat. Morgan reacted with his typical tact and restraint by walking off in a huff like a toddler.

After Morgan tried to attack Prince Harry by claiming that his brother William ‘went through the same thing [his mother’s death] and he’s managed to come to terms with the media and he works with the media’, Beresford interjected to note that siblings do not react to trauma in a uniform manner. He then called out Morgan’s cruel hatred of Meghan.

‘There was bad press around the engagement, before the engagement, and everything that has followed since has been incredibly damaging, quite clearly to Meghan’s mental health, and also to Harry. And I hear Piers say that, you know, William has gone through the same thing, but you know what… siblings experience tragedy in their life and one will be absolutely fine and brush it off and the other will not be able to deal with it so strongly and that’s clearly what’s happened with Prince Harry in this situation. He walked behind his mother’s coffin and a tender, tender age in front of the globe. That is going to shape a young boy for the rest of his life. So I think that we all need to take a step back. And I understand that you don’t like Meghan Markle. You’ve made it so clear a number of times on this programme. A number of times. And I understand that you’ve got a personal relationship with Meghan Markle or had one, and she cut you off. She’s entitled to cut you off, if she wants to. As she said anything to you since she cut you off? I don’t think she has, but yet you continue to trash her.’

At this point, Morgan got out of his chair, ranting that he ‘can’t do this’, then left the set while Beresford continued talking. He called Morgan’s behavior ‘absolutely diabolical’ and added ‘Piers spouts off on a regular basis and we all have to sit there and listen. 6:30 to 7 yesterday was incredibly hard to watch. Incredibly hard to watch.’

Morgan later returned and attacked Beresford, claiming that ‘What we need to do Alex is talk to each other in a civilized manner given we work on the same show, on the same team. You launching into a pretty personally derogatory monologue on one of your colleagues probably isn’t one of the best ways to go about it.’

Dude can’t take what he dishes out.

Alex Beresford is right, and it’s a shame that it’s taken this long for someone on his own show to call him out. I would also note that it was Beresford, a Black man, who was able to do this without Morgan screaming over him or dismissing his claims. Clearly, Morgan couldn’t handle Beresford’s calm and succinct summary of the problem at hand, so he shuffled off rather than eat crow.

But what the hell were all his white co-workers doing, sitting there in silence? Susanna Reid, his co-anchor, gets all this great press for ‘not taking Piers’s crap’ but his comeback wouldn’t have stuck if she hadn’t been willing to sit there and take it. She just pouts and does meme-friendly reactions but never directly shuts down the bullying, the transphobia, the racism, and the obvious trolling.

And then there’s ITV. They were the network that chose to employ this disgraced former editor, the man who was fired from headlining the Daily Mirror because he published fake images of torture. This is the man who has been accused of bullying in a letter signed by nearly 1,200 people working in the TV industry.

Last year, popular ITV host Caroline Flack died by suicide. In the aftermath, as the media faced a reckoning of sorts over how Flack was treated by the press and her own employers, ITV doubled down on their own mental health awareness campaign called Get Britain Talking. Their message, according to a press release, was ‘the importance of taking steps to help maintain mental wellness, with making time away from distractions for regular conversation with friends and family recommended as a simple but effective measure.’ I’m curious as to how that works when one of their most prominent hosts gets paid lots of money and is given unchallenged airtime not only to repeatedly bully a woman but do outright deny her candid admissions of her own mental health struggles. Be Kind, right?

ITV Chief Executive Carolyn McCall said, ‘I completely believe what she said, that the most important thing with mental health that ITV does and is totally committed to, is that we support, we get people to speak up, we listen, we say everyone has to listen and everyone has to believe because that’s how you get people to speak up. So we are very committed to that.’ Once again, where does Piers Morgan outright calling a woman a liar for talking about how she didn’t want to be alive anymore fit into this? Do you actually care about destigmatizing mental health or does the bottom line matter more?

If ITV is in any way serious about tackling stigmas surrounding mental illness and depression, they should fire Piers Morgan. But they won’t. They’ll giddily let him continue his cruel crusade until something terrible happens.

← Morning Briefing: What a Difference a President Makes | Watch the Trailer for 'Kung Fu,' The CW Series Starring Olivia Liang →