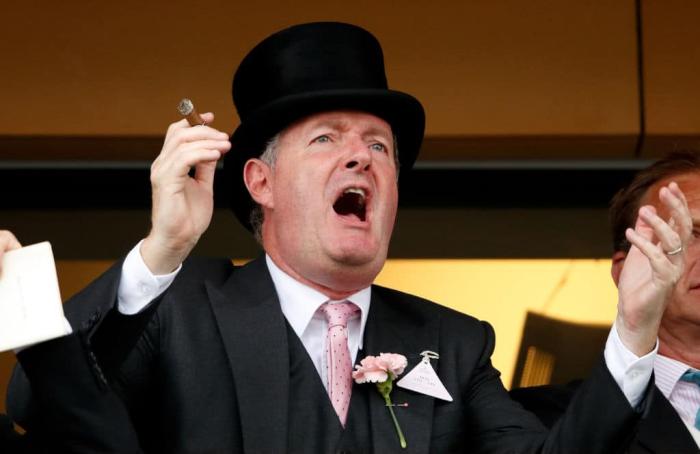 Every time I write up a news story for this site relating to one Piers Morgan, I get a lot of people telling me that I should just ignore him and stop feeding the troll. He’s an attention seeker, they say, and he exists solely to incite anger in a way that will help bolster his image as some sort of truth-speaking voice of the silent majority, so the best thing to do would surely be to deny him his bastardized form of validation, right? I get that argument, I truly do, but if the past few years of life on- and offline has taught us anything, it’s that ‘Don’t feed the troll’ is a bullsh*t tactic used to silence the marginalized and further empower the violent bullies. There are exceptions where such things are warranted, but with Piers Morgan, we should be calling out his bullying, harassment, and bigotry whenever we can. Yeah, he knows what he’s doing and what reactions he’s going to get, but that doesn’t mean we should overlook the very real emotional, mental, and societal consequences of his words and actions.

Following the death of Caroline Flack, Piers Morgan, one of the most infamous bullies in British media, has decided that he will blame anyone and everyone for Flack’s passing other than the press system of which he has played a major part. His latest target is Jameela Jamil, who was friends with Flack for many years. Morgan is now posting messages Flack sent to him months before her death and claiming that they are proof that Jamil is a horrid bully who, by implication, is responsible for Flack’s passing.

I simply said I found the show “surjury” (not her) problematic for kids to watch. And that love island needed some more diversity. Both times Caroline instigated debate with ME even though I was not targeting or blaming her at all. I always just politely explained my point. pic.twitter.com/XL9UdrQTcy

Piers Using a dead woman who I was friends with, as a weapon to try to create further harassment for me as I’ve JUST explained publicly that last week I felt suicidal… is why he is this industry’s most problematic . My criticizing a *show* did not aim any hate at Caroline.

Even by Morgan’s lack of standards, this is low. This is a subterranean level of scum. Caroline Flack isn’t here to defend herself. Not that Morgan would have cared about silly things like her autonomy or independence. He slagged off Love Island all the time, but it didn’t count from him, apparently. Using the words of a dead woman to attack and incite a public abuse campaign against a woman of color who has admitted her own mental and emotional health struggles is a brand of cruelty that has a clear intent. Morgan doesn’t want to mourn Flack. He doesn’t want to learn any lessons from her passing or engage in self-reflection. He wants to use her memory as a bat to bludgeon those he disagrees with. Given his record of racism, misogyny, transphobia, and involvement in the phone-hacking scandal, we are all too familiar with his type and who he enjoys targeting. He goes after the marginalized for a reason. I’m not sure he’ll be happy until he has a body count put to his name.

We know the cycle he wants to feed. A woman becomes beloved by the British public. He incessantly fuels the fires of hatred against her, typically with loaded racist and sexist rhetoric, makes as much money from this process as he can as the mental and emotional health of his victim becomes fair game. Then, if tragedy strikes, he can play the moral arbiter who judges everyone else for their ills while he shines his halo, waiting for his next target. Do you think he watched the Britney Spears episode of South Park and thought it was an instructional guide?

So much for Be Kind, I guess…

← Joe Biden's Only Chance to Recover and Consolidate Moderates Will Be Stymied by ... Tom Steyer | Florence Pugh and Paddington Bear Bond Over Marmalade →