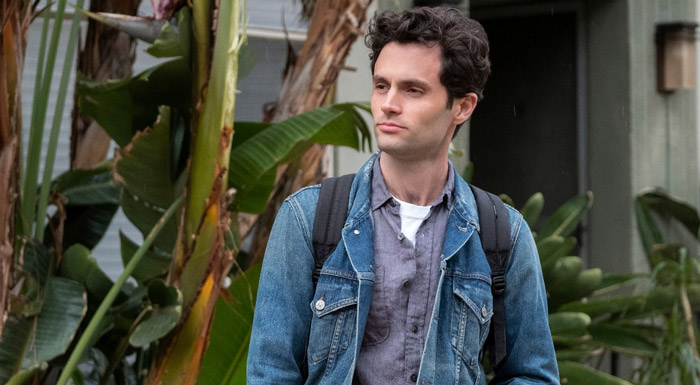 Months before allegations came out that stand-up comedian Chris D’Elia was grooming young female fans for sexual scenarios, he was playing precisely that part in Season 2 of You. Now, You’s leading man, Penn Badgley, has spoken out about the allegations against D’Elia, calling the whole situation “disturbing” and expanding on how it might have gone on for so long.

On a forthcoming episode of the LA Times’ Can’t Stop Watching podcast, Badgley was asked about the D’Elia allegations. He responded, “I am very troubled by it. I don’t know Chris. I know that, if there’s anything we need to do in this age, it’s to believe women.”

Badgley revealed that after the D’Elia allegations broke, You producers reached out to Jenna Ortega, who played Ellie, the 15-year-old fan nearly victimized by D’Elia’s character on the show. The producers wanted “to make sure she felt safe.” He added reassuringly, “We can feel safe and sound there.”

Badgley also spoke about how it feels to learn an alleged predator lurks within the cast of You, a show that attempts to capture and critique toxic masculinity, male entitlement, and various forms of gendered abuse. “The idea that a show like ours would indirectly, unwittingly be a haven for people who are abusive is disturbing,” he said, “It’s very disturbing.”

However, Badgley warned against thinking the problem stops with the individual, in this case, D’Elia. “One thing that our culture tends to do—quite systematically and methodically—is to revel in identifying villains so that the system can remain evil,” he said. The individual should face justice, but the systems that enabled him need to be evaluated for how they failed victims and fostered predators. “What is really important is to recognize that the policies that underwrite every given system—the practices, the regulations, the laws that underwrite every one of these systems—which act as a haven for the individuals that take advantage, namely white men.”

As for D’Elia’s community of comics, he’s had few public defenders. His longtime friend and Whitney co-star Whitney Cummings denounced his “pattern of predatory behavior,” noting “Girls should be able to be a fan of a comedian they admire without being a sexual target. It’s the adult’s responsibility to be an adult.” Comedian Bryan Callen seemed to wipe his social media of posts containing the stand-up. Amy Schumer didn’t name D’Elia directly but took to Twitter (and the Notes app) to show her support of the “brave” women coming forward with their stories, “especially the ones who weren’t of legal age to consent.” She also offered her phone number for those who needed an ear.

Many more comedians tweeted responses to the D’Elia allegations, cracking jokes and calling out complicit comedy club owners who allowed minors into these performance spaces.

“I know I have said and done things that might have offended people during my career, but I have never knowingly pursued any underage women at any point. All of my relationships have been both legal and consensual and I have never met or exchanged any inappropriate photos with the people who have tweeted about me.

That being said, I really am truly sorry. I was a dumb guy who ABSOLUTELY let myself get caught up in my lifestyle. That’s MY fault. I own it. I’ve been reflecting on this for some time now and I promise I will continue to do better.”

It doesn’t seem his agents and manager are buying it, or maybe they just think being tied to an alleged serial predator is bad business. Deadline reports CAA has dropped D’Elia as a client. Plus, Comedy Central, Hulu and Amazon Prime Video all pulled the Workaholics episode “To Friend a Predator,” on which D’Elia played a child molester. There’s no chance of D’Elia returning in You Season 3, as he was written out in Season 2. Meanwhile, Netflix has three Chris D’Elia specials still available on its streaming platform.