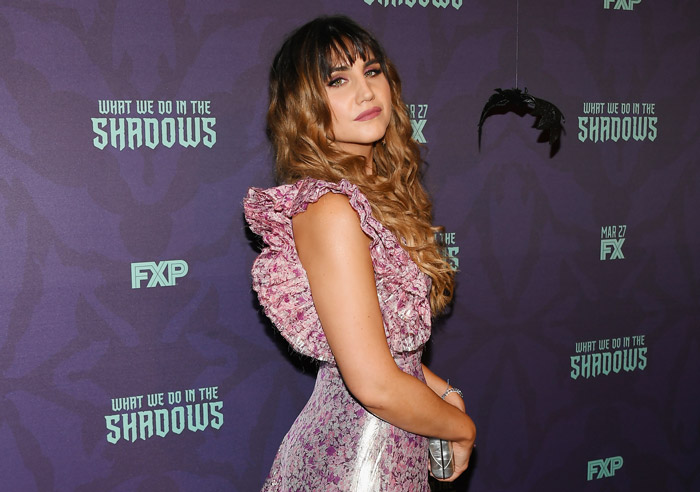 From What We Do In The Shadows, she arose a dark vision of wild, feminine allure. Her skin, pale as moonlight. Her hair, a midnight-black river that crashes around her crown then flows down the back of her long, lush velvet cape. Her eyes are bright with a wicked glee that is reflected in the glistening edge of her fangs. As Nadja, comedienne Natasia Demetriou strode into the night(time TV lineup), leaving us swooning with laughs and lust.

Lips lacquered blood red, Demetriou delivers a sexy smirk with the same confidence she does a biting punchline or a bloody silly bit of physical humor. Her vampire is not some stoic, ever-graceful immortal. She is a fiery she-beast, who will spit curse words, strike you down, and mock mediocre white men by mercilessly comparing their names to “a weak ejaculation.” Her cackle is so robust that it could make the gargoyles quake. Her accent is as thick as quicksand, and with her ever snippet of trilling song or growled threat, she pulls us in deeper.

In 2020, Demetriou not only gave us the much-anticipated second season of What We Do In The Shadows but also the unexpected delight of The Big Flower Fight. The Netflix competition series followed an eccentric crop of artists, who faced off for floral statuary domination. Amid squabbles over resources, battles with gravity, and a fresh batch of unique challenges each episode, Demetriou blossomed as a quirky co-host. The goth snarl of Nadja was left behind in Staten Island. In an idyllic rural setting, the English-Cypriot star showed her softer side, wearing elegant garden-party fashions while making sweet yet salty quips about the goings-on and personal grooming. Plus, she’d bestowed upon the contenders a panoply of pet names, like “botanical beauties” and “my little Brussels sprouts”. Which yes, did make me insanely jealous of the entire lucky lot.

Still, Demetriou wasn’t finished with us yet! She popped up in the absolutely perfect comedy, Eurovision Song Contest: The Story of Fire Saga. Amid a crackerjack cast that boasted Will Ferrell, Rachel McAdams, Dan Stevens, and Demi Lovato, Demetriou appeared alongside her real-life brother Jamie Demetriou. He played the genius production designer Kevin Swain, while she was the icy choreographer who struck fear in the hearts of the titular duo.

As Nina, Demetriou was not granted scads of screentime. Still, she made every moment count, bringing her skill for acerbic humor and a physical looseness to create a character unique yet familiar. Because if you didn’t know a dancer like Nina, were you even a theater kid at all?

This past year, Demetriou gave us ample reason to crush hard on her. And my, what a thought— to be crushed by her! Like her dear, dorky Jenna, we might well wish to be taken into her arms, swept into the curtain of dark locks that I imagine smell of blackberries and blood, and introduced to a world weird, wonderous and…yeah, still pretty stupid. But hey, at least you’d have a killer-cool companion, sultry and hilarious, to exchange scathing eye-rolls with.