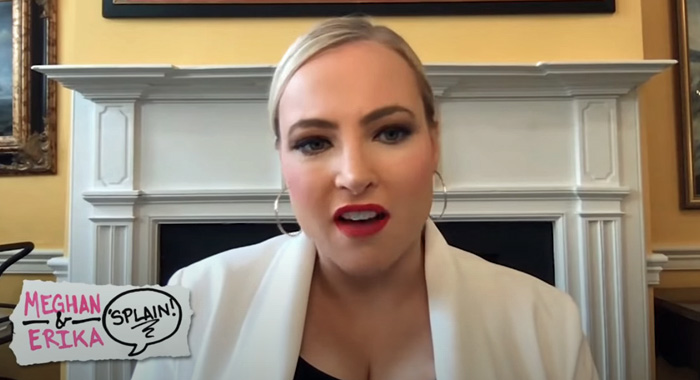 As she so often does, Meghan McCain stopped by Watch What Happens Live last night and fielded another question from Andy Cohen about whether or not she’ll be voting for Joe Biden. Normally, Meghan’s move is to say a lot of glowing, flowery words about how Biden was there for her family when MY FATHER™ died, even after recently losing his own son to cancer, and I’m genuinely not here to knock that connection. But what usually happens after that is Meghan dances around the subject and leaves her answer purposefully vague about how she will vote in November.

Not so much this time.

Now that Biden is the nominee, Meghan’s answer is probably the most concrete it’s ever been, and trust me, no one is sitting here wondering “Who the hell cares who Meghan McCain is voting for?” more than me. I’ve stared off into the distance and questioned my life choices at least 27 times during this paragraph alone.

Anyway, Meghan says “it’s not exactly rocket science” to guess who she’s voting for while spelling out that one candidate has been a lifelong family friend and the other repeatedly opens her dad’s casket and pisses in it. When asked if this is the first time her family will vote for a Democrat, Meghan says that there are days when the president has left her mom crying, which is astounding because Meghan never talks about her mom. Some days, I’m convinced John McCain humped a futuristic egg sac in a lab. I drew pictures and everything.

All of that said, once again, Meghan never says the words, “Yes, I will be voting for Joe Biden and he has the full endorsement of the McCain family.” Does it really matter given that she’s intimating pretty clearly that Biden has their vote? I honestly don’t know. She’s already getting lit up on Twitter just for this clip alone, so it’s not like she’s pulling a fast one on conservatives she’s trying to keep in her corner. Although, in fairness, they’re not the brightest bulbs, so I can see how Meghan would just assume they’d never put two and two together. That’s way too much thinking for that crew.

On a more deliciously petty note, Meghan also fielded a question about that time Elisabeth Hasselbeck stopped by The View and basically said prayer will ward off the current predicament. Turns out Meghan was not a fan, and unlike her decision to vote for Biden, she didn’t mince words telling Andy that she never wants Hasselbeck to come back as a co-host after that. More importantly, clearly, someone in Meghan’s circle reads these articles.

“Yeah, somebody actually sent me a screenshot of my face when she said that,” McCain said. “I took this virus seriously from the very beginning and thought this rhetoric was really dangerous. I think it’s really, really unfortunate and dangerous that she said that. I don’t need to co-host with her again. And it’s unfortunate because I’ve been a huge fan for a long time. And anyone who’s screwing around with this virus and putting out misinformation, I don’t have a lot of time for that right now.”

Could that be my screencap where I point out that finally, Meghan got to make “Is this bitch for real?” face that everyone makes at her during each and every episode? Maybe! If it is, dear Meghan’s assistant, please inform your master that her dad’s first marriage didn’t work out either, so there’s no shame in meeting new people. Handsome writing people. (I’m on a Secret Service watch list now, aren’t I? — Swish.)

And on the most pettiest note, because never forget I crawled out of the gossip sewers where I ruled over a thriving Turd Kingdom of clicks and POWER like a shining golden god, I couldn’t find this segment in any of the WWHL YouTube clips, but I’m almost positive Meghan is pretending to do a shot of water. She even retweeted this GIF, and I don’t think she’d do that knowing full well that social media would eat her alive if she was doing shots while pregnant.

Then again, her husband got busted for violating labor laws yesterday, so who the hell knows what’s happening in the McCain-Domenech house these days? Their idea of marriage counseling is Jack Daniels and a handgun (actual quote), so uh, yeah, best of luck with that. I’m just gonna slowly creep away before this gets any darker.

Lol someone reported Ben Domenech's union-busting tweet to the NLRB and now The Federalist has to admit to their employees that he broke the law https://t.co/DksuwOEWwV

← Why is Ben Suddenly So Unpopular on 'Survivor'? | 'Tiger King' Honest Trailer Summarizes All You Need To Know About The Netflix True-Crime Series →