Nic Cage Throws Fuel On The Trek vs. Wars Fire

Nic Cage continues to gleefully court controversy by coming out in an interview last week as a fan of Star Trek over Star Wars. What this man won’t do for a little attention. Amiright?

Star Trek fans rejoiced at this news across social media over the weekend. Just kidding. But people did get really excited about the idea of someone writing Cage into an existing Star Trek property. Including one of the writers themselves. 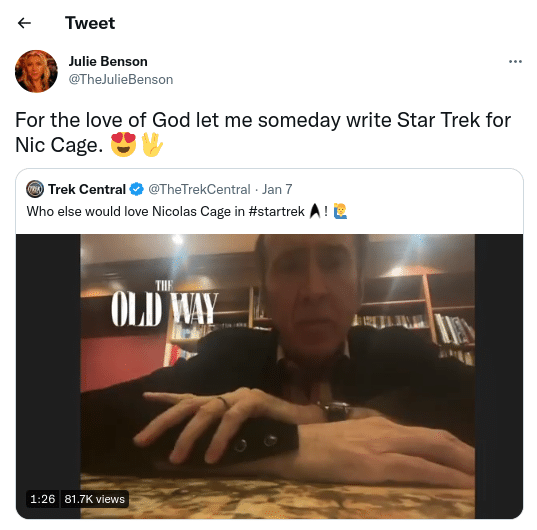 I’m all for it. Nic Cage is the overly dramatic, scenery-chewing type of actor who always did well as a guest on the classic Star Trek. Put him in something shiny, glue some prosthetics to his face, and he’s going to make magic happen.

Cage’s revelation was in response to being told that Pedro Pascal wants to recruit him onto the cast of The Mandalorian. But there’s no need to look at this as Nic “picking sides.” There’s room in his heart to love all of us, Trekkers and …. do Star Wars fans have a name? Is it Nerfherders? It should be. Maybe Star Warlords?

The point is, there’s no reason for this information to divide us. It’s fair to say that Wars and Trek offer two different types of science fiction. Star Trek is the more technical, speculative fiction type of story. While Star Wars is more grounded in the fantasy of “A long time ago…” One’s cake, one’s pie. They’re both delicious desserts! Have some.

In our house, this was never presented as a choice. If Star Trek was on we watched Star Trek. If the Channel 11 Sunday Matinee happened to be A Star Wars, we watched that. There were only five channels at the time. It wasn’t like today when you can find six HBOs all running a different Star Trek movie at the same time and you have to choose between those or watching any/all of the Star Wars movies on Disney+. Plus, there is so much more to both franchises than just a TV show or a couple of movies. They have both developed into robust universes with many stories to tell. What I’m saying is: You could do both, Nic. It would make us all so happy.


← Joaquin Phoenix Has a Bad Life in Ari Aster's 'Beau is Afraid' Trailer | Richard Linklater Signs the Next Mr. Big Deal to a 20-Year-Movie Project →