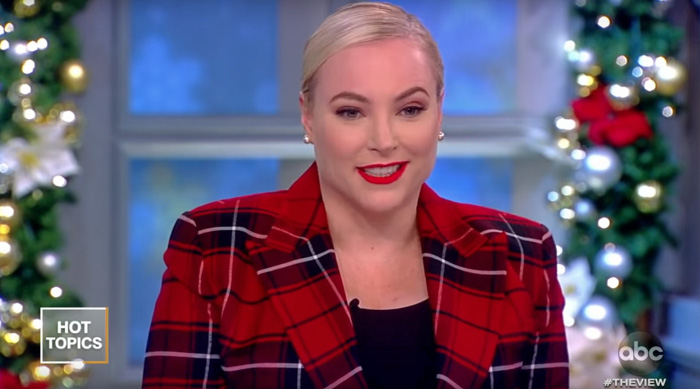 Meghan McCain & Whoopi Goldberg Made up Despite That Stupid Daenerys Tweet

Yesterday, the internet watched in delicious, petty disbelief as Whoopi Goldberg finally had enough of Meghan McCain being, well, Meghan McCain and flat-out yelled, “GIRL, please stop talking,” in an effort to stop John McCain’s discharge from interrupting Sunny Hostin. It was, to coin a phrase, f*cktacularly glorious. However, whenever there’s a dizzying high, there’s sure be to a dizzying low, and welcome to it.

At any given moment, there seems to be solid betting odds that Meghan is angling to get herself fired from The View or “persecuted” enough that she has no choice but to quit and run back into the arms of Fox News or, I dunno, some alt-right video arm of her husband’s piece of shit website. It’s a feeling that’s constantly in the air, so after getting bodied by Whoopi Goldberg on live television, I can honestly say I had no idea what would happen next. My initial inkling was that Meghan probably wouldn’t quit, but she might take a day off to milk this puppy for all its worth, and her dumbass Daenerys tweet first thing in the morning leaned heavily in the martyr direction.

Good morning - to all the fellow conservative “girls” who won’t be quiet. pic.twitter.com/958DzFDAEp

Nothing like comparing yourself to a bleached blonde who went full Nazi* while completely coasting off of her family name— wait.

Anyway, in a move we all should’ve seen coming, Meghan still showed up to work and instead of breathing fire down upon her enemies, she performed a little bullshit Kabuki theater with Whoopi to the tune of “We’re a family, and sometimes families fight blah blah blah barf.” (Mike Note: Pay careful attention to the expressions, or lack thereof, on Sunny and Joy’s faces. It is the quietest of tea.)

However, while Whoopi played the peacemaker and was overly diplomatic in an attempt to paper over the situation with pseudo-feminism and toxic analogies about how families “stick together,” she inadvertently demonstrated what happens when you let the hot garbage back into the fold. It will immediately try to trash more shit because it knows it can get away with it. Via Raw Story:

McCain asked to address the blowup, and she began by insisting she and Goldberg get along and love one another before scolding the audience for getting emotionally invested in the show.

“I’ve loved you for a long time,” McCain said. “You were good friends with my dad. We fight like we’re family. It’s all good, we’re not tearing the set apart. Calm down, all of you.”

She then blamed the confrontation on the political divide, and complained about coverage of the blowup.

“We’re passionate women,” she added. “I’m hyper-conservative, everybody else at the table is not, and sometimes we’re going to clash heads, but indicative of what the holidays are like for people, but we also came together and we’re fine and everything is good.”

Just so we’re all clear, that was Meghan not only playing the victim card without missing a beat, but also throwing Abby Huntsman — who is supposedly her best friend — directly under the bus. Because, seriously, what the f*ck does “I’m hyper-conservative, but everyone else isn’t” even mean? Abby’s right there next to Meghan jumping on grenade after grenade for the GOP albeit without derailing every conversation like she’s auditioning for Real Housewives of Caucasia. But that’s why Meghan is on the show, and The View isn’t even trying to hide it anymore.

How do I know? On any normal day, clips aren’t uploaded to the official YouTube channel until around 3 p.m. EST. Meghan and Whoopi’s “apology” was available before The View was even done airing. The producers know exactly what they’re doing right down to having a “Meghan Whisperer” on set if I’m reading this Page Six report on yesterday’s blow-up correctly.

After the exchange, the women still had to get through a full hour of the show. “Everybody wants to have a good conversation. They don’t want to go to commercial exasperated,” an insider told us. “Producers did come out and prep them for the next segment and explained, ‘We still have more show to do.’ One of the producers specifically talked to Meghan.”

I’m going to tell it to you straight, whoever does that job isn’t getting paid enough. I don’t care if they have a fanny pack full of Jell-O shots and can sink one into Meghan’s red lipstick’d maw from forty feet away, there’s no way in hell that paycheck is worth 60 minutes of trying to prevent a polar bear pumped full of privilege from going goddamn berserk. Christ, no wonder Sunny spends every episode talking very slowly and very calmly. One sudden move and she’s eating marble countertop while a meaty claw holds her down. Will she live long enough for the tranq to kick in? Nobody knows!

*For the record, I’m firmly with Lindsay Ellis in the Dany Got Done Dirtay camp including the part where D.B. Weiss and David Benioff literally wrote in the final episode script that her character is Dragon Hitler now. It was not subtle, and a huge wet fart. — Just like Meghan!