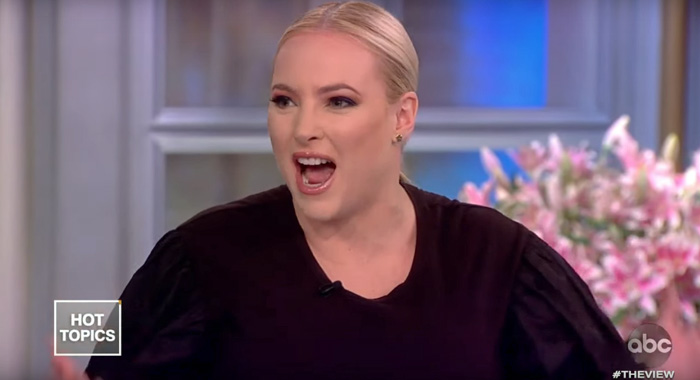 Meghan McCain Threatened To Run For President, It's Finally Happening

In an ideal world, just the mere thought of Meghan McCain running for president should be nowhere near the deflating and depressing turn of events that led to Elizabeth Warren ending her campaign. But this isn’t an ideal world. It’s a roaring garbage fire adrift a sea of turds, and at the end of it lies a giant serpent waiting to piss Joe Rogan supplements into our eyes.

Anyway, in a rare moment of unity, Meghan and the rest of The View panel were indignant about the sexist implications of Warren dropping out the race. Meghan, as always, was particularly loud, which is funny because by most accounts she goddamn hates Elizabeth Warren and has been calling her for to drop out since New Hampshire. But Meghan is barely beholden to words she said five seconds ago let alone an entire month, so here she is going off. Via Decider:

“I believed she’s a much better candidate than Bernie. I think she was smarter, more likable — and that goes to men and women — more prepared at the debate,” she said of Warren. “When you have people like Klobuchar, Warren, Kamala Harris who’s a sitting senator — gender really did come into play.”

McCain went on to say that “there’s a feeling of exhaustion” about how the media covers female candidates. “It’s the way they look. They’re too likable, they’re not likable enough. They’re to shrill. She’s not smart enough. She’s not warm enough,” she said. “When are we going to start treating them like men?”

While lamenting the lack of a female president, Meghan actually had the flaps to say that women are more “collaborative,” which I’m not saying isn’t true. But it’s extremely rich coming from someone who routinely plays the victim, calls Joy Behar a “bitch” at the drop of a hat, and literally ran her own best friend off of the show because she dared to talk about her kids.

Like all things Meghan, the conversation quickly steered towards MY FATHER™ who always told Meghan that she could be president one day. And I absolutely believe that thanks to her uncanny ability to channel Veruca Salt if the wind is blowing one-tenth of a degree in the wrong direction. More terrifyingly, Joy kept the President Meghan conversation going because God has truly forsaken us.

Behar joked that McCain should run for president, sending them off on a tangent. “Would you vote for me, Joy?” asked McCain. When Behar hesitated, the conservative co-host laughed it off. “Nostalgia would come into play,” offered McCain. “You’d say, ‘Meghan, check!’”

Here’s the thing: Donald Trump made it to the Oval Office and all he had going for him was being on TV, a mountain of racism and a strong urge to have sex with his own daughter. Meghan McCain would at least be entering the race on the wings of a political dynasty; very, very slightly less levels of racism; and people would also know her from the TV box. So I guess what I’m trying to say is I’m fleeing to Iceland and waiting for a glacier to crawl across my face.