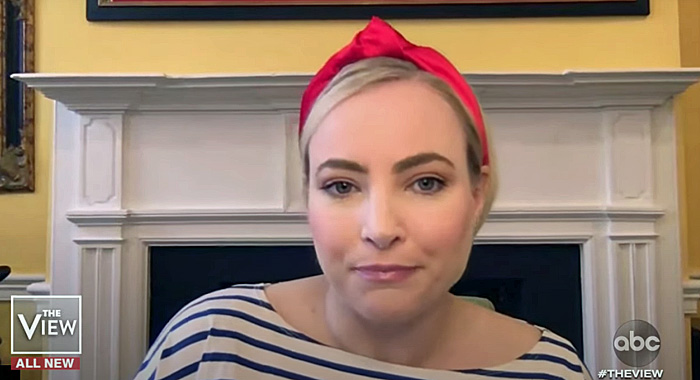 I know the exact opposite is probably true, and my brain is almost definitely collapsing on itself from a steady diet of frozen dinners and Easter candy, but if there was ever a sign that things are slowly returning to “normal,” it’s gotta be Meghan McCain being back on her bullsh*t.

Yesterday, we watched her abandon her shockingly sensible stances on social distancing and bashing Trump’s response to the pandemic because she saw a bunch of morons brandishing guns. I don’t recall seeing any of them holding Jell-O shots, but you’d just assume they did by the way Meghan horfed their sh*t up. Later that day, she continued her streak by attempting to tie Trump’s latest attack ad against Nancy Pelosi to armed white people threatening to open fire if they have to use the drive-thru twice to get their free iced tea refill. (I’m not even joking about that last part. How are we all not dead?)

This ad is an absolute savage blow and an example what I was trying to explain today regarding having empathy for the protesters and people living in fear of how they will feed their family and keep the lights on. https://t.co/ALFcLIU8LH

To bring everyone up to speed in case you wisely and correctly stay off of Twitter, last week, Pelosi appeared in a James Corden sketch where she showed off her freezer packed to the gills with ice cream. Almost immediately it became a political football for the far left and far right because horseshoe politics be horseshoeing. Was it a bit tone-deaf? Sure, I guess. I know it’s gauche to eviscerate the rich at every turn, especially while staring down the barrel of an economic depression, but is anyone really surprised that a congresswoman has a nice refrigerator and keeps it stocked with goodies for her nine grandchildren? I mean, Jesus Christ. Last I checked, Bernie is a millionaire who owns two homes and his campaign was practically sponsored by Ben & Jerry’s. Pick your battles is what I’m trying to say here.

Anyway, Meghan wouldn’t even be a thing if she wasn’t born into one of the wealthiest political dynasties in America, so she’s the last person who should be lecturing anyone on wealth optics while dialing into her million dollar talk show job from her luxury home. But that would require an ounce of self-awareness, so naturally she barreled into the topic like a pale, white Karenible Hulk.

After tweeting the night before that the ad was a “savage blow,” she upgraded it to a “kill shot” on The View.

“It’s not the ice cream that’s in her fridge, it’s the fact that she’s standing behind giant refrigerators, multiple ones that cost $24,000 each,” McCain said. “And you’re right, Joy, politicians are wealthy, Trump is wealthy, but I think in this specific moment, optics are narratives. I don’t make the rules of politics, this is just how it works.”

“Trust me when I say this, it will play very well in the middle of the country,” McCain added before pivoting to an attack on Rep. Alexandria Ocasio-Cortez (D-NY). “You have the two arguably most famous Democratic women in the country, I think, botching a major, major conversation right now.”

Fortunately, Sunny Hostin was not in the mood for Meghan returning to her base-level form of being just the goddamn worst, and she fired back at John McCain’s daughter for latching onto the horseshit ad.

“Back to the James Corden interview that was, like, a week ago with Nancy Pelosi, I mean, that’s just manufactured,” Hostin said. “I think Fox News outrage and Republican outrage. They’re talking about but her freezer, but her freezer — I’m really worried about the bodies that I saw being put into freezers in New York. That’s what I’m worried about.”

“I’m really worried about the fact that there’s no testing being done, the fact that the — you know, the vice president is saying that we are testing 150,000 people a day and that that’s enough,” Hostin continued. “Well, that’s not enough because it would take six years to test everyone. So that’s really, you know, what I’m worried about.”

“Blaming some Democratic message for Trump’s incompetence and for Trump’s negligence in managing this crisis is absolutely ludicrous,” she added.

Welp, I don’t know about you people, but I need a cigarette after that and I don’t even smoke. “I’m really worried about the bodies that I saw being put into freezers in New York.” Damn, lady. Meghan’s dad didn’t even drop that much napalm. Mostly because he crashed, but you get my point.

← On Reddit, People Are Exposing The Goods Now That Their Nondisclosure Agreements Have Expired | Why is 2007 Film 'There Will Be Blood' Trending on Twitter? →