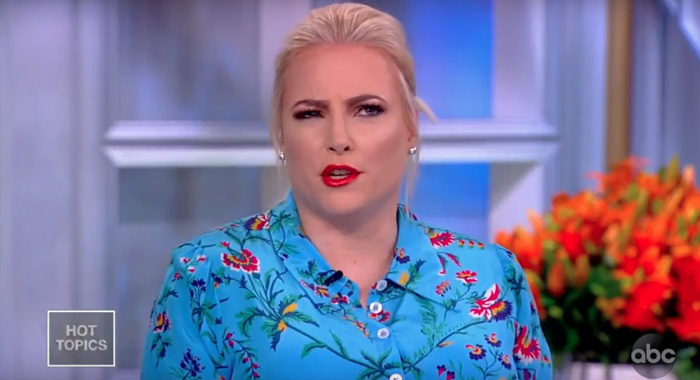 While sporting the new Hopper’s Hawaiian line from Target, Meghan McCain pumped herself full of Jell-O shots and cannonballed into the Jeffrey Epstein debacle after handling the situation with a surprising amount of reason and restraint just yesterday. Then again, it’s not like the Epstein allegations are an epic systematic failure that resonates across several world governments unlike say, oh I dunno, black mermaids. That’s where Meghan defends the unseasoned potato salad wall. That’s where her watch begins.

Anyway, things got heated today after Whoopi Goldberg asked a very good and correct question about where the hell is the evangelical response to Epstein because she sure as sh*t isn’t hearing it.

“Do you know who I’m waiting to hear from?” Goldberg said. “All those folks that are out there that talk about that they want to take care of young people and make sure young people are good. I just, you know, why isn’t the evangelical community coming forward? Where is everybody?”

“That was worrying me,” she added, “because I thought, well, one of the ways that you show that you care about people is you come out and you condemn this kind of stuff. But, you know, and all the folks that I’m used to hearing talk about, you know, this one is bad or this is bad or this — haven’t said much, and I was just wondering where they were.”

As much as I criticize The View for being bullsh*t political theater that actually thinks Meghan McCain enriches our national discourse instead of just squawking Ben Shapiro tweets in between exclamations of her parentage, Whoopi is addressing a topic that the media generally handles with kid gloves, because it is still the conventional wisdom that white evangelicals are good, salt of the earth people who will do the right thing for America when the chips are down.

Evangelicals are having the time of their lives. Child concentration camps? Hallelujah! Arresting women for having miscarriages? Praise the Lord! A descent into dictatorship as Trump refuses to accept the results of democratic elections? Praise Jesus! This is it, baby. This is as good it gets for evangelicals, and they have no plans to end this party quietly or possibly ever.

Jim Bakker warns his audience that if Trump is not re-elected, Christian leaders and politicians will be murdered: "This is life and death." https://t.co/uvY1dShunU pic.twitter.com/ekaOIZ5gJB

So this is why it’s good that Whoopi is at least broaching the subject of evangelical hypocrisy to whoever the hell watches The View because the answer of where they are on Epstein is shockingly simple: They don’t give a sh*t. Especially when there’s a sizable chance that it might blow back on Trump, who they are very ready to defend if it’s brought to light that he raped teenagers. It’s the underlying subtext in every “gotcha” question about how liberals will react if Bill Clinton gets snatched up even though it’s abundantly clear that we’re ready to toss his ass right in the garbage.

In the meantime, it is extremely interesting that Meghan chose to bristle at Whoopi’s line of questioning because, as I’ve mentioned before, MY FATHER© was a Goldwater conservative. If you don’t know what that means, in the simplest terms, John McCain wasn’t one of the religious nutjobs who began infesting the Republican Party in the late ’70s and early ’80s. Granted, he pretended to be one when running against Obama, but historically, the McCains have been notably areligious to the point of being pro-choice and Meghan’s support for LGBT rights.

However, Meghan has drastically changed her tune on a woman’s right to choose to where she’s willing to go whole hog for the bullshit crusade on “late-term abortion.” (Which, for the record, is not a thing.) Perhaps out of denial, I just assumed Meghan’s hard swing into Crazy Town was simply a matter of keeping pace with other conservative talking heads. Turns out the cold hard truth was right in front of me the whole time.

“My in-laws are evangelical,” McCain said, “as I’ve said many times on this show, and they are good people.”

Should I have probably guessed that the publisher of The Federalist who grew up in South Carolina is an evangelical? Yup, my bad on that one. Should I have also guessed that Meghan clearly converted to said evangelicalism? Again, the evidence was all there. An Islamophobic, wildly hypocritical, anti-choice white lady who can dismiss the suffering of live children at the drop of a hat?

Jesus Christ, the only thing missing is falling for a pyramid scheme.

← The Class Inequalities in the British Acting Scene Are Bad And Talking About It Isn't Bullying | Review: In His Netflix Special, Aziz Ansari's Perfectly Addresses Me Too Allegations →