Yesterday, The Atlantic published an extremely long piece of palace intrigue called “The Heir” that uses an extraordinary amount of words to claim that Donald Trump Jr. is now the favored child in the “Trump Dynasty” while Ivanka has been shoved into a corner, which is a fascinating hypothesis because, last I checked, Junior isn’t a blonde with rocking boobs. This theory literally flies in the face of everything we know about President Donald Trump except for the fact that he’s an erratic fartwagon of dumb, so it does track with his penchant for doing God knows what at any f*cking moment. Fair enough.

Anyway, despite its excessive length, I’m not going to pretend that I didn’t devour every single word of “The Heir” because Sloppy Drama is my middle name. The piece also dropped two incredible nuggets of information:

1. The Trump children had the run of an entire penthouse floor, and their neighbor would often stop by to play video games. That neighbor? MICHAEL. JACKSON. Yeesh.

2. Trump Sr. was extremely pissed when Junior started dating Kimberly Guilfoyle. Why? He tried to bang her first. Gross.

Delicious gossip aside, “The Heir” worked a bit too hard to bolster its claim that Junior is a burgeoning “Kingmaker” in the GOP because literally every source claiming that Junior is a rising star is a right-wing sycophant like Rand Paul, Mike Cernovich, and Charlie Kirk. Talk about super reliable sources that only an idiot would take seriously, and welcome to the smoothest Meghan McCain transition you’ll ever see in your life. I literally just blew smoke off of my fingers.

While discussing “The Heir” and the very idea of a “Trump dynasty” actually existing — in which case, we’re dead, we’re all dead — Meghan came out hard for Junior and repeated several of the right-wing talking points about his ability to draw crowds. She also took a huge swing at Ivanka, which seemingly came out of nowhere until she reminded the audience that Ivanka and Jared crashed her father’s funeral. Not giving Meghan an inch of slack is my bread and butter at this point, but even I’ll gonna give her pass on that front. Plus she gets owned barely five seconds later by Joy.

You see, while Meghan came prepared with nothing but the article she whole-heartedly endorsed without bothering to test at least a few of its basic facts, Joy came loaded with proof that Don Jr. isn’t kingmaking shit. Specifically, this tweet that showcased his natural Trumpian skill at drawing crowds.

What’s fantastic about this move is even Meghan can’t deny that Meghan just got owned and owned hard. In fact, she made this face after it happened, and I’m not gonna lie, this is on par with witnessing the Birth of Christ for me. It’s a miracle I haven’t printed this out and duct-taped it to my kids’ foreheads. 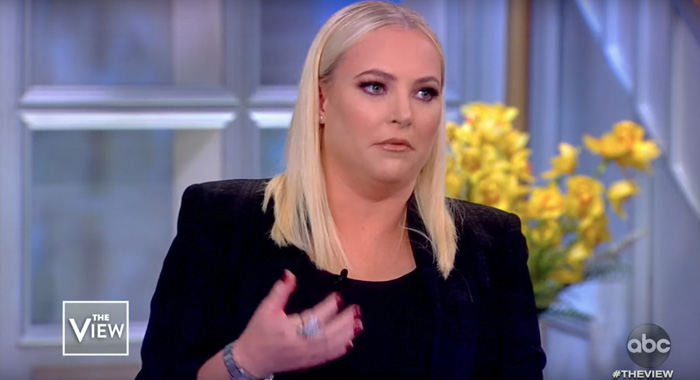 And yet, somehow, the discussion gets even better. This might literally be my most favorite episode of The View ever. After Meghan gets spectacularly owned and the panel continues to rip apart the Trumps, Sunny Hostin goes on an incredible rant about nepotism that is absolutely delicious if you recall how much Meghan hates Sunny. There is no denying who she’s taking a barely-veiled jab at.

AND THEN MEGHAN AGREES WITH HER.

On September 10, 2019, the following words came out of Senator John McCain’s daughter’s mouth:

“I don’t think necessarily because your parents are good at something that you inherit their talent, because great politicians, the reason why they’re great is because it’s lightning in a bottle. They’re unique.”

Mother of f*cking god. And here comes the absolute best part. After Meghan McCain makes a strong, yet oblivious argument against the television career of Meghan McCain — and Abby Huntsman, who the camera hilariously pans as her face plainly says “Bitch, where are you going with this? I have kids…” — Meghan’s brain visibly breaks. You can’t make this shit up. Barely two seconds after her spiel on nepotism, you can clearly see her mind catching up to the words that just came out of her mouth.

I cued it right up for you, and if your monitor is better than mine, tell me if you see sparks:

Exactly how I described it, right? It’s such a palpable malfunction that I’m amazed she didn’t start yelling “DO YOU KNOW WHO MY FATHER IS?” at herself. Seriously, if anyone else on the panel had said those words, Meghan would’ve crossed her arms so hard that it’d make that sound when Indiana Jones punches people. Just that real meaty “THWAP” followed by eye-daggers for 47 minutes.