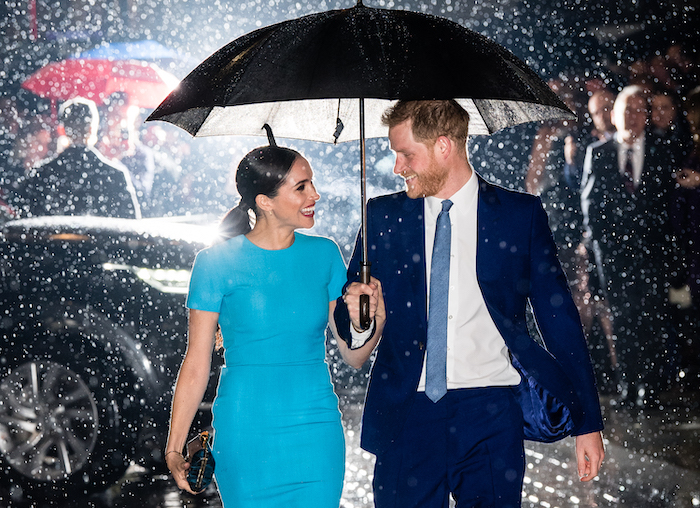 Some people just need Mr. Rogers and his unrelenting message of kindness in their lives. Barring that, they need to be shunned and hissed at because it’s 2020 and I ran out of patience for misogynistic and racist attacks on women who are simply out there, existing, minding their own business, and looking fabulous in the process.

Who am I talking about here? I mean, take your pick, basically, any woman of color in the public spotlight could be applicable, but if you had Meghan Markle on your “WTF, Assholes, Who Are You Shitting On Now?!” bingo, you can mark that square off.

Yes, proving her point that she needs to get the f*ck out of dodge aka, leave the Royal family with her husband and child, some mean, racist white lady was on TV calling Meghan “five clicks above trailer trash” because why not?!

WHUT?! Megan Markle is ” five steps up from Trailor trash”? This guest should never be brought on again. #EVER https://t.co/wFPwJSDSPg

You know—if the last woman running for president hadn’t dropped out this week, leaving the choice between one old white guy from another, I might have more patience for this. But that’s not the reality we live in. We live in a reality where women are constantly sh*t on by everyone. F*cking everyone. There are reasons to shit on someone—all of them are basically because someone is actively harming the social fabric of society, or they’re Ann Coulter. Meghan Markle has done none of that to warrant some stranger coming on TV and dog-whistling the idea that not only is she common, she’s the worst kind of common. (I’m going to leave the whole gross context of “trailer park” alone because you know what? In the dystopian hellscape that is 2020 having a roof over your head, regardless of where, is a pretty herculean feat so f*ck anyone who shits on what that roof looks like but also f*ck you for saying it in the first place, too, lady.)

Which leads me to my plea, or really why I’m screaming into the void today—can we please stop asking racist assholes to come on TV and tell the world their racist asshole opinions, especially about women!? Like, we do not need that discourse and also—we get it. A racist asshole is a racist asshole, their opinions do not change—and the racist asshole take on Meghan Markle is not only well-covered, it’s a big part of the reason why she’s leaving the f*cking country because at a certain point, you get really sick of hearing everyone’s racist asshole thoughts about you because racist assholes are racist assholes. Consuming that acidic take day after day rots your brain and your soul. No one needs it, and it doesn’t need to be normalized by being shown on TV.

I understand Meghan Markle is good for traffic but I also understand that when you have 24 hours of news coverage to fill on the woman that you do not need to sh*t on her in order to get people to tune in, even though sh*tting on women is the default take in this world. (I just saw it’s International Woman’s Day. I’m going to laugh through my tears.)

For instance—we know Meghan’s star sign. Every day, instead of asking a racist lady to come on TV and be a racist asshole, you would ask a non-racist astrologer to natter on, happily about what Meghan’s horoscope means for her. That’s at least three hours of content right there. You get a crystal psychic, and a numerologist, you’re up to 9 hours. You spend 10 hours pitting the three of them against each other, and the remaining 5 seeing if the predictions came true and you just provided 24 hours of news coverage, baby! See, it’s really not that hard to not broadcast racist sh*t.

Granted, in this particular instance, the racist white lady got cut off after she showed her racist ass, but a little bit of due diligence here would have ensured the racist lady was never on the air in the first place!

Anyway, I’m tired. I’m sure you’re tired too. This is the sh*t we don’t need—and never needed yet still it comes. Stop putting racist white ladies on TV. I beg of you.

← Daniel Craig Hosts a Very Good 'SNL,' but It's Elizabeth Warren Who May Bring You to Tears | Box Office Report: 'Onward' Delivers Soft Debut; 'The Way Back' Sees Underwhelming Numbers →