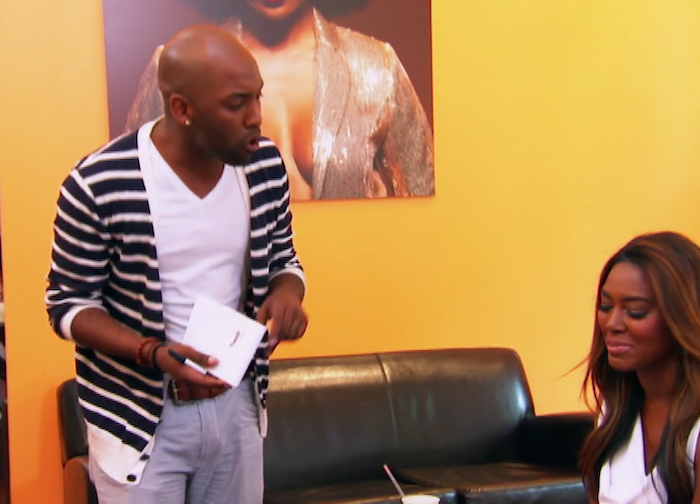 I have a confession. Yes, I loathe Love is Blind but that doesn’t mean I don’t have a private Twitter group where I get with my friends and watch it together and talk a lot of shit about it in the process. It’s our thing. We hate ourselves for it, but damn it if we’re not riding this train straight to hell, aka the finale.

In the course of this thread, one friend posted this tweet, and I nearly lost my goddamned mind:

Also Carlton is Cynthia Bailey’s assistant who beefed with Kenya I AM LOSING IT pic.twitter.com/GIVXVSzM6S

In news that will not shock anyone—yes, of course I watch Real Housewives of Atlanta, although not lately because ever since Phaedra got kicked off the show, and it became the Nene Leakes hour, I lost interest—but I’m getting off track here.

Carlton, if you recall left Love is Blind after he and his fiancée Diamond fell out of love (and respect) for each other over Carlton’s admission to his fiancée that he is bisexual, and the subsequent fight that ensued over the trust that Diamond felt betrayed by. It was brutal to watch and definitely drove the point home that maybe falling in “love” with someone you’ve only ever had a conversation behind a wall with is not exactly a strong foundation to build a life on. I’m not confident any of these couples will (or should) get married in the finale later this week, although I’m looking forward to seeing how Jessica makes this all about herself in the process.

For those of you who might not be as familiar with (old) RHOA drama, I’ll break down what happened. Eight years ago (on season 5, episode 1) Kenya — who is one of the quirkier cast members of the show — beefed with Carlton, then-assistant of Cynthia Bailey (who I really like.) A contemporary write-up at the time from the Baltimore Sun described it thusly:

In case you missed it, on Sunday’s episode Kenya Moore was invited by Cynthia Bailey to a be a judge at a casting call for JET magazine’s Beauty of the Week. At the casting Kenya practically tore the girls apart throwing out rude comments after ruder comment. Cynthia’s assistant Carlton stepped in to save the models telling Kenya that her comment was rude. Kenya then proceeded to call her security guard on Carlton … WHAT!! Yes, we’re still in shock about that.

The best part about all this manufactured drama is that there wasn’t security for the event—Kenya brought her own because Kenya is b-a-n-a-n-a-s. Cynthia, of course, had a pretty good talking head to that: “for her to walk anywhere with a bodyguard when no one knows who she is makes no sense.”

If you’re wondering, Carlton was not escorted off the premises and Cynthia backed him up the entire way, which is part of why I like Cynthia. She’s one of the nicer, more logical members of the cast. (My favorite RHOA lady will always be bone-collector and She by Shereé founder and CEO, Shereé Whitfield, though.)

If you care enough to track this episode down, Hulu has it in its entirety, although the Carlton/Kenya/security scene doesn’t happen until almost the end of the episode.

Well, there you have it. I’ll be sure to let you know if any other Love is Blind contestants have a reality show past because I find this stuff interesting, so maybe you do too.