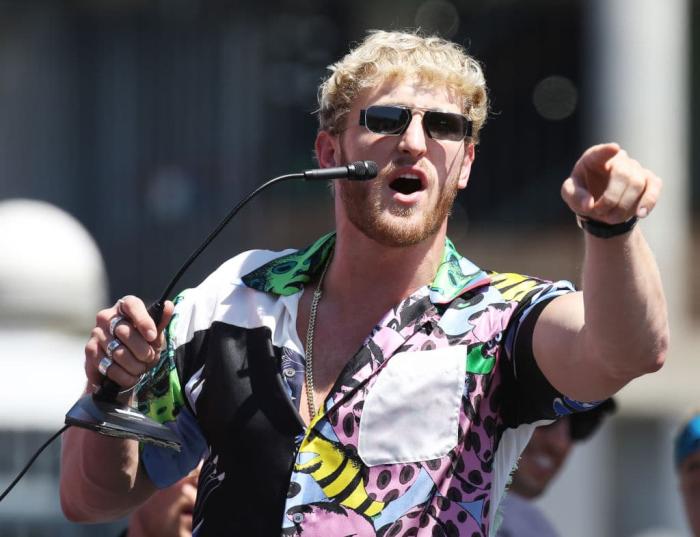 Remember Logan Paul? He’s the YouTube star with close to 20 million subscribers who is best known for ‘prank’ videos that include hilarious delights such as faking his own violent death while young fans watched, tasering two dead rats, and filming the body of a recently deceased man in the Japanese suicide forest for the lols. Alas, he has not gone away and indeed his subscriber count seems to have grown since that controversy because the YouTube algorithm is evil and capitalism will one day consume us all.

Well, now he’s a boxer, because why not allow others to knock his presumably empty head in once in a while. Last year, he took on Olajide Olatunji, better known as fellow YouTuber KSI, and now it’s time for the rematch, which will apparently be the debut of his professional boxing career.

The press conference included the typical trash talk between opponents. KSI brought up the suicide forest incident, but it was Paul’s remarks that got the internet’s attention. He responded with an abortion comment, because of f*cking course he did.

‘Y’all may not know it but JJ’s on his fifth abortion. His fifth. That’s five babies dead,’ Paul said. ‘And I think I might return the favor. And I might kill you. I might end you. I’mma light you on fire, bro.’

It’s unclear whether these comments are true or not and KSI did not respond, but Twitter got busy with #LoganPaulIsOverParty. The hashtag is mostly people sharing their own celeb obsession of choice. There are a lot of K-Pop singers in there. Oh, and the occasional right-wing contrarian jerk who thinks Paul is now some sort of conservative hero. Stanning a bully who films dead bodies for profit to pwn the libs.

But yeah, this is like the dozenth time we’ve ‘cancelled’ this irredeemable f*ckwit and yet he’s still here. He’s the crabgrass of YouTube, the herpes of influencers, the human embodiment of global warming that will soon leave us all begging for the sweet release of death. He’s set up to be rewarded time and time again by YouTube and the ecosystem of celebrity because even though he’s disgustingly toxic there is still money to be made from his ‘brand’ and YouTube don’t give a f*ck about what they’re promoting by elevating him to untouchable celebrity. Hell, they’re almost as bad as Twitter in terms of letting bloody Nazis stay on their site so why bother with this thumb-face?

How is it only Tuesday?