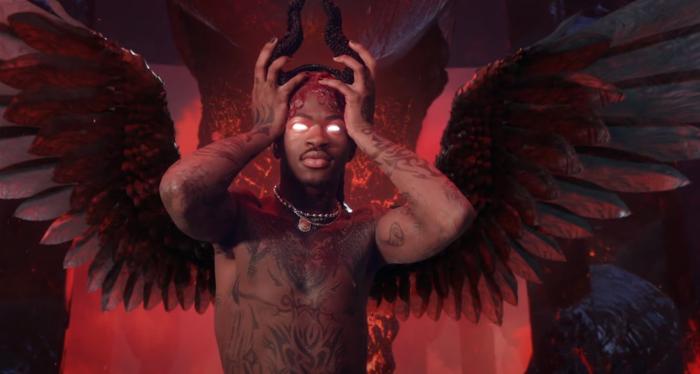 Last week, Lil Nas X dropped his newest single ‘Montero (Call Me By Your Name)’ along with its music video. It quickly did exactly what it set out to do and took over the internet. Nas, who has the longest-running number-one song since the chart debuted in 1958 with ‘Old Town Road’, has been hinting at this single since July of last year. It did not disappoint, and the video … honey, he was twerking on the Devil.

It’s a solid bop and a great video, a technicolor mish-mash of mythology, sensuality, and memes. Adam B. Vary wrote for Variety that the video ‘changed everything for queer music artists.’ The symbolism is pretty clear but no less effective. Hey, you fake Christians have spent all this time saying that LGBTQ+ folks are going to hell, so why not have fun down there? It’s better than being forced to hide your real self in the name of so-called goodness.

Plus it pissed off ALL the right people and we celebrate that. Let’s bring back music that scares ‘concerned moms’ and the Tipper Gores of the universe. Of course, the usual suspects decided to try and swing for Lil Nas X with the typical cycle of fake piousness, fear for the children, and a lot of racism and homophobia. But here’s the thing: Lil Nas X is a 21-year-old who grew up on the internet and used to run a Nicki Minaj stan account. You cannot strike him down. How dare you even think you can survive online beef with him. I’d rather take on Johnny Depp fans demanding the Snyder Cut and no politics in video games than Lil Nas X!

But hoo boy we did have fun watching him quietly demolish the worst people in the world. Like Governor of South Dakota Kristi Noem.

ur a whole governor and u on here tweeting about some damn shoes. do ur job! https://t.co/qaor6W0B9C

“Shoot a child in your mouth while I'm ridin'”

Then Candace Owens, the living embodiment of ‘Ma’am, this is an Arby’s.’

you know you did something right when she talks about it https://t.co/9ujlFhBMdZ


Then some dude named Nick Adams who brags about being a Trump-endorsed author? Yeah, I dunno either.

u can’t last 30 seconds in bed with your wife https://t.co/6mFCJlceWb

You’ll notice the racism of the absent dad bullsh*t she’s trying to pull here. She’s now crying that Lil Nas X wants to rape her dad, which goes to show you how desperate the supposed anti-SJW ‘f**k your feelings’ losers are to be offended and victimized at every single turn. Go wipe front to back a few more times, sweetie.

I’m glad Lil Nas X is having fun with this moment but it still sucks to see a young gay Black man using his art to express himself in the way others have done since the beginning of time and be subjected to the same cycle of attacks from the same crowd of faces. It is, however, hilarious to see all these wannabe God warriors up in arms over him making a video where he twerks with a CGI devil. Like, isn’t Satan your enemy? And haven’t you spent all these years saying that LGBTQ+ people will go to hell? Why are you so mad that they took the pole down to the fiery pits? That’s what you want! Would you rather he twerked on Jesus? I’m sure he can make that happen.

We know what’s happening here. It’s yet another opportunity for the talking-heads and rent-a-gobs to latch onto a moment of pop culture for their latest battering ram against the eeeeevils of modern liberalism or whatever. I’m not sure how this doesn’t directly contradict their other favorite rants about how the left wants to censor provocative art, but consistency isn’t their strong suit. OK then, try and take your swing at the guy who can demolish you in one tweet or Spongebob meme. He’s waiting.