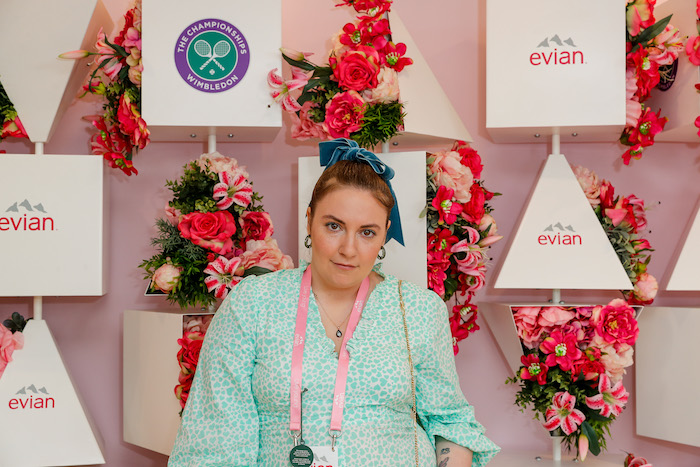 Friends, as you well know, there is a niche on the internet that is solely devoted to rolling one’s eyes to the point of strain at basically anything Lena Dunham says or does. It’s the internet equivalent of eating cold pizza: enjoyable, fun, but also, you know exactly what you’re getting when you do it.

Up until now, I haven’t really concerned myself with Lena because while I don’t find her harmless (that s*it she pulled on Aurora Perrineau is unforgiveable) I do feel like life is too short to seek out things you know will irritate you. Thus, I don’t actively look for Lena Dunham in, well, anything, and as a result, there is basically never any overlap with her and the bubble of pop culture I pay attention to.

That is until she came for Love Island, and our two worlds collided.

Yes, friends, over the weekend Lena Dunham wrote a think piece? Op-Ed? Contractually obligated blog post tied to Love Island SEO? I honestly don’t know what it was, but I read it, for the Guardian titled: Lena Dunham on Love Island: ‘I’m asking the same question they do — can you love after hurt?’

The basic gist of the piece, which make no mistake, is basically all about Lena and not about heartbroken Amy, who Curtis did dirty by not being upfront about his lack of interest with her before Casa Amour, or how Michael did Amber equally dirty a few weeks ago but I digress (Love Island is infinitely more interesting to talk about than Lena Dunham, what can I say?) Sorry, it’s all about how Lena Dunham is single now, but she wasn’t always single, but also, her love life is kind of like Love Island, love is pain, and hopefully she’ll find someone, someday. That’s her thesis.

I read Lena’s piece, and I’m still not entirely sure what it’s about (other than Lena Dunham) or what it has to do with Love Island. My only real takeaway was that somehow Dunham manages to s*it all over the UK, by calling every accent she mentions “regional” (undoubtedly because she’s using RP as the standard because she’s that person.)

I am asking myself the same questions they ask themselves on Love Island, really. Can you love again after hurt? What does partnership mean? And what does it mean to know someone if you don’t know yourself?

But on Love Island the pain is mediated. Not by their beauty, not by their youth, but by the fact that they’re living in a simulacrum, constantly observed though rarely acknowledging the observer. Many sensitive souls have a tendency to narrate their own life as if it were a movie, but few of us have our first love punctuated by theme music and a guy in a sound booth somewhere.

OK. First off, I looked up the definition of simulacrum so you don’t have to. It means: image or representation. I’m not sure why those words wouldn’t do in the piece.

Secondly, I’m not sure how having your pain observed by a viewer mediates said pain? Furthermore, and perhaps more pertinently, pain isn’t the point of the show and maybe this is where the disconnect is happening for me here. I don’t watch Love Island to see other people in pain. I don’t watch anything to see people in pain. I watch the show because it’s fun to watch hot people drink too much, fight, hook up, wash, rinse, repeat. You don’t have to think when you’re watching Love Island. You get to root for randos you will never meet in real life, to win the cash prizes, and maybe, just maybe, find love. Love Island, and reality shows in general, are sports for people who don’t watch sports. To me, there is no difference between rooting for Tommy and Mollie Mae to win this season of Love Island than to hope that Tom Brady gets abducted by aliens so that the Patriots, who I understand cheat, don’t win another sports ball championship.

Also, I would argue that it’s narcissists and not “sensitive souls” who narrate their own life as if it were a movie but that’s neither here nor there.

I have to hand it to Dunham though, she manages to suck all the trashy joy out of Love Island when she writes about it. I didn’t know that was possible:

Up until now, I’ve been fairly silent about why I love Love Island. To fully get why I was primed for it, you have to understand the time I’ve had. Nineteen months ago, I left my first long-term relationship and endured a public breakup that wasn’t as bad as Amy’s but made me feel like Amber after Michael walked back into the villa with Joanna. I pulled a Lucie and immediately hurled myself at someone new, an explosive and uncomfortable five months, during which I was briefly engaged after being proposed to with the lace of a Timberland boot while snowed into my parents’ apartment

Hi. Kate here, I’d like to make it clear that you can like the things you like and not justify it to anyone. It’s OK to like fun, trashy things because they’re fun and trashy. Not everything you enjoy has to be considered “good” by the literati crowd. I’ve read Proust, I did not enjoy the experience. I’d much rather watch Love Island than ever engage with “Swann’s Way” again. Also, please understand that the point of published personal essays is that there should be some element of said essay that should strike a chord of recognition with the reader or speak about our society at large. If the piece is solely about you and your experiences, and not really applicable to anyone or anything else, that’s called a diary entry, friend.

Here’s the deal, I’ve now spent more time trying to understand Dunham’s article than I actually spent reading it, and at this point the only thing I want to do is put on Love Island on Hulu while I go clean my home. So, I guess if Love Island is helping you frame your own life to find meaning in it, good for you. We all deserve some clarity and comfort in this world, except for Curtis, who again, did Amy dirty and I’m not having that.

Just know this, friends: you do not have to justify what you like to anyone else…and you only have to write an Op-Ed for The Guardian about said justification if you really feel like it. There are other paths than the Dunham way.