Last night, Katy Perry teased the unveiling of her latest music video, “Never Worn White,” with an Instagram post that promised two big looks. The first was category Adele Realness in long blonde hair, soft make-up, and a cleavage-friendly white gown. The second was May Queen eleganza that seemed straight out of the marvelous horror movie Midsommar, which might be a warning sign for Perry’s fiance Orlando Bloom! But the biggest surprise was saved for the video’s full reveal: Perry is pregnant.

You are cordially invited to the premiere of #NeverWornWhite 🤍 Join me on the @YouTube watch page tonight at 8:30pm PT and chat with me (promise not a bot! 😛) before the video premieres at 9pm PT!

Here is the full music video for the stirring ballad, “Never Worn White.”

In the above video, wide shots of the white dress reveal that it is not an empire waist giving her that volume. It’s a baby bump! In this context, maybe that floral look is meant to be more a nod to Beyoncé’s pregnancy pics than Midsommar, especially considering Perry’s gauzy final look. 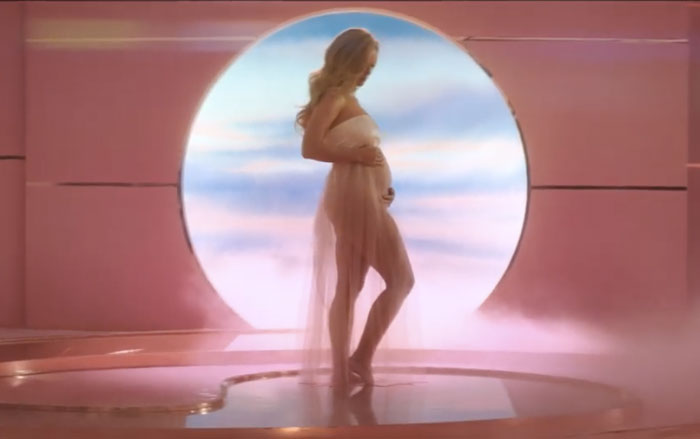 People reports the pop star confirmed her pregnancy in an Instagram Live chat that didn’t start on time, saying, “I’m late, but you already knew that.”

Perry also shared that the baby is due this summer and has got her craving spice so hard that’s she’s taken to carrying hot sauce in her purse. On Twitter, the “Fireworks” singer dropped her secrets on how she’s been hiding this from the press.

or carry around a big purse lol

And for those snarking at the title “Never Worn White” because of Perry’s two-year marriage to British comedian Russell Brand? She noted that for her first wedding, her dress was “dove gray.” So, don’t choke on that haterade.

← No, Donald Trump, It Is Not OK to Go to Work with the Coronavirus | Trailer: In 'Ozark' Season 3, It's Finally Laura Linney Time →