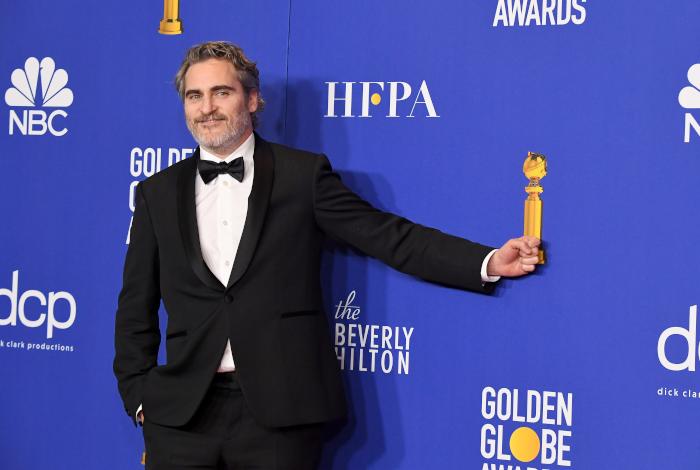 While half of his speech was bleeped out due to all of Phoenix’s cursing, his nod to the Hollywood Foreign Press Association, thanking them for offering a vegan meal at the festivities, was not. Here’s what he said:

“I would like to thank the Hollywood Foreign Press for recognizing and acknowledging the link between animal agriculture and climate change. It’s a very bold move, making tonight plant-based.”

But, that’s not the strangest part. Apparently, Phoenix was, in a way, extending the thank you to himself as it was later confirmed by Variety that he was the one who pushed for the vegan-only menu, which included golden beet soup, oyster mushroom “scallops” (they were fake scallops, we get it!). Even the snacks at the bar were vegan.

Apparently, however, not everyone was happy about the vegan-only options. While it’s a… responsible gesture, it’s an aggressive choice to offer only vegan food at an awards ceremony without providing attendees with the option for other things. (It’s likely why some celebrities were later seen scarfing down beef burgers.) During the Golden Globes ceremony, one attendee was even heard saying they’re “starving,” so Phoenix’s push for the vegan menu wasn’t exactly popular among the masses.

Backstage in the press room, Phoenix said this about the menu:

“I’ve never been so proud to attend an awards ceremony as I am tonight. It’s coming to a point now where the evidence is irrefutable and undeniable. Now, consuming animal products is no longer a personal choice. It’s having drastic consequences around the world.”

It seems Phoenix was more thrilled to discuss the vegan options more than he was about Joker, an odd choice considering he’d just won an award for the damn movie. The actor made it clear to one journalist that he was tired of answering questions about the film. Not like it’s his job or anything. Like I said, insufferable.

← Does the Latest 'The New Mutants' Trailer Mean We're Finally Going to See It in Theaters? | Why is Chet Haze, AKA Chester Hanks AKA Tom Hanks and Rita Wilson's Son, Like This? →