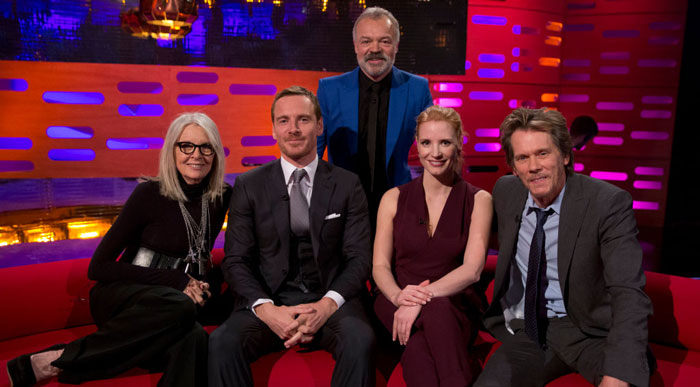 Jessica Chastain Demands To Be Remembered For Kissing Diane Keaton

Rom-com queen Diane Keaton has done a lot of kissing. She’s proudly kissed Keanu Reeves, Jack Nicholson, Michael Douglas, and Kevin Kline in movies, but also has snagged smooches on talk shows from Justin Beiber, Jimmy Kimmel, and Michael Strahan. However, one on-camera kiss with a major star was missing from a montage video that Keaton posted on Instagram. Jessica Chastain was smooched then snubbed!

In response, Chastain offered a cheeky video of her own.

Hey @diane_keaton saw the kissing montage on your page - nice edit but I think you left some great footage on the cutting room floor… pic.twitter.com/iiAWPXbUkb

Yet Chastain wasn’t the only talk show kiss left out of Keaton’s montage! Check out the full clip from The Graham Norton show to see the rom-com icon at work.

In the above vid, Keaton proclaims she loves an onscreen kiss because you get the thrill without the strings of a relationship. Then she admits, “I enjoy it. I also like the audience.” This leads to Keaton giving love lessons and kisses to Norton, then Kevin Bacon, then Jessica Chastain. Frankly, we don’t know who we’re most jealous of in this scenario.