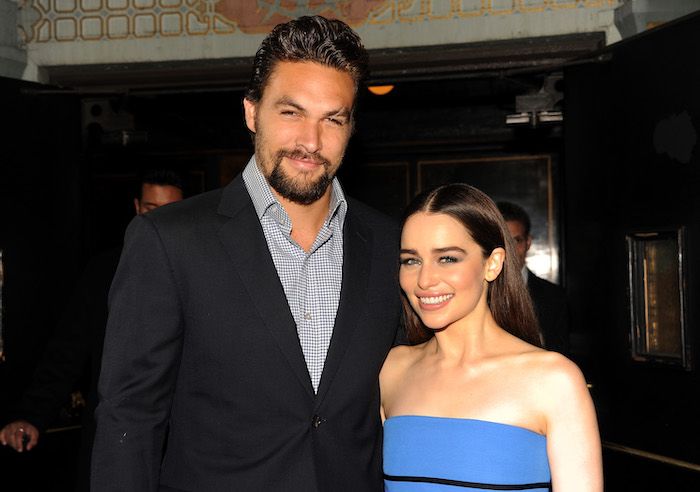 Everyone should have a work husband or wife. They are the co-worker you feel closest to, who can give it to you straight, and help you formulate a plan when your employer isn’t acting with your best interests in mind (which never happens in a capitalist system, right?!)

If you’re Emilia Clarke, not only do you luck out with the best eyebrow game this side of Elizabeth Taylor, your work husband also turns out to be Jason Momoa, who helps you lay some boundaries with your employer, who happens to be a show about dragons and Sean Bean. (Yes, I’m talking about Game of Thrones.)

I’ll explain. You may have seen this headline, today:

Emilia Clarke recalls being pressured to go nude on Game of Thrones for fans https://t.co/04wbFFzCjt pic.twitter.com/zyRPiKAgld

I mean, it’s making the rounds, but isn’t on People.com, so that should be the first tip-off that this may be blown out of proportion.

So the big thing everyone is jumping on is a small excerpt from her interview on Dax Shepard’s Armchair Expert podcast. This is the pullquote from Jezebel:

Clarke said in the podcast, “I’m a lot more savvy [now] with what I’m comfortable with, and what I am okay with doing. I’ve had fights onset before where I’m like, ‘No, the sheet stays up,’ and they’re like, ‘You don’t wanna disappoint your Game of Thrones fans.’ And I’m like, ‘Fuck you.’”

… although in the continuous cycle of snippets pulled from a two and a half-hour interview, there is, of course, more. There always is, right?

This is what preceded that quote, which TVGuide excerpted for us, because I have many talents and transcription is not one of them:

Clarke explained that because of that imposter syndrome, she felt like she couldn’t speak out about how uncomfortable she felt and frequently ended up crying in the bathroom on set. In the end, the person who actually stood up on her behalf was Jason Momoa, who played her on-screen husband, Khal Drogo, until the character’s death near the end of the first season. “It was definitely hard, which is why the scenes, when I got to do them with Jason, were wonderful because he was like, ‘No, sweetie, this isn’t OK.’”

So, taken out of context, it certainly seems like she was pressured to do nude scenes, but the overall story isn’t about a (hypothetical) example of exploitation but more how Emilia Clarke came into her own and set her own damn boundaries.

You know who helped her do that? Her work husband, Jason Momoa.

I mean, yes, it is s*itty that a young woman just starting out in her career didn’t have a system in place to support her from the get-go. That really sucks, and I feel for her. I’ve most definitely cried in the bathroom at work, too! She’s in a not-so-exclusive club, there.

The point is, the request in the excerpt above illustrated how she refused to give in to something she didn’t want to do. She was able to do it because someone helped her understand it’s OK to set your own boundaries at work and stick to them.

It sucks to get pressured at work. It doubly sucks when you don’t know the power you can wield in your position because you’re new to it, and it triply sucks when people take advantage of not knowing your own power, and the particular insidious imposter syndrome that seems to uniquely affect qualified people and never the people it should (you know, like our orange president.) That’s why work husbands (and work wives) are so great. They’re people in your corner to help you out, and point out when the system isn’t treating you right.

“He’s one of those incredibly rare people who their personalities and their spirits are as big as he is. It’s like the double whammy. He radiates! It’s beautiful.”

“[During those early sex scenes], he was crying more than I was! He took care of me in an environment, I didn’t know I needed to be taken care of. It’s only now that I realize how lucky I was. It could have gone many, many, many different ways … he was so kind, and considerate, and cared about me as a human being.”

In a perfect world, everyone would abide by the “don’t be a jackass, and treat people how Jason Momoa would tell you you deserved to be treated.” Unfortunately, that is too much to ask at times—that’s why we need people like Emilia to speak out about finding your own voice (and boundaries) at work, and people like Jason, to help people struggling, find that within themselves.

All I know is, it’s good to have a friend in your corner, and if that friend is Jason Momoa, well, then, Emilia? Well done. 🙌