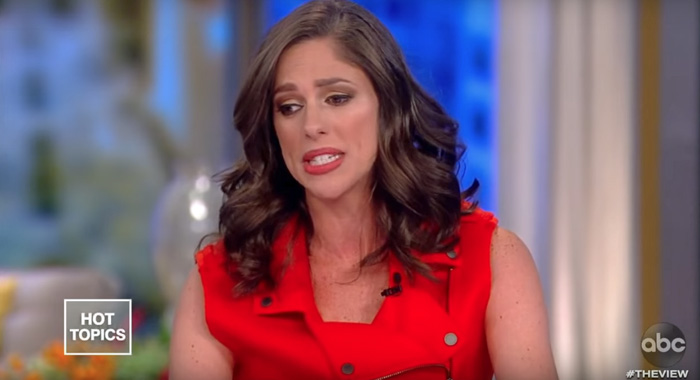 In the End, Abby Huntsman Just Wasn't Toxic Enough for 'The View'

Last Friday, Abby Huntsman exited The View in a manner that essentially got her booted from the Shrieking Gargoyle Made of Mayo Hour: Quietly and with minimal drama even after ABC left a knife in her back. Not only did Abby downplay the reports that the real reason for her departure was the toxic environment emanating out of Meghan McCain, but she went out of her way to lick what I can only assume are a pair of boots with custom Jell-O shot pouches. Via Deadline:

On Friday’s show, though, Huntsman singled out McCain as someone who has gone through personal challenges in her life while co-hosting the show.

“You guys see the ups and downs of all of our life. Meghan — you see what she has been through in her life,” she said to the viewers. “You guys live it with us. It is not easy to come out here everyday and be so open and honest and talk about the hardest topics of the day. I have so much respect for everyone at this table and for everyone at this show.”

Huntsman added, “I just want to make it as clear as day, with everything that has been written about this place, that I am leaving so thankful for all the new friends that I have here, for all the friends I had before and will still have, and for the opportunity because this place has changed my life for the better.”

For the record, I’m not trying to venerate Abby here. If the rumors are true, the only reason she even had a job on The View is because Meghan hates Ana Navarro and pulled a power move to get her blocked from being a full-time host. So I’m definitely not about to fall on my sword to defend some white lady gang bang of nepotism. That said, while more times than not Abby showed up to The View armed with the exact same Fox News talking points as Meghan, she did demonstrate a significantly higher capacity for reason than John McCain’s Daughter©, which led to informative discussions that might actually educate a daytime audience instead of making them watch an angry marshmallow in makeup endlessly shriek about her parentage.

Unfortunately, in the eyes of ABC, reasonable debate is boring as f*ck — or “bland” as sources told the Daily Mail — so you probably won’t be surprised to learn that Abby was allegedly on the chopping block before making her decision to leave.

The insider explained: ‘Abby was added to the show without chemistry-testing with the other women mainly because she had a prior relationship with Meghan McCain and ABC was desperate to make Meghan appear more likeable.

But it didn’t take execs long to realize that Abby talked a lot, but she never really said anything. Her points and opinions never really landed with the audience because it often lacked substance.’

Again, I’m not about trying to paint a wealthy Republican politician’s daughter as the victim, entirely, but from my obsessive watching of The View, I did notice that Abby was susceptible to opposing viewpoints and would actually change her stance because of them — which is a good thing! Especially in this absolutely buttholed hellscape we live in. But that level of nuance isn’t as exciting as Meghan digging her heels in and refusing to budge from whatever Federalist horseshit she’s spewing that day before eventually calling Joy Behar a bitch, so here we are. From a PR standpoint, that Daily Mail report sure reads like ABC’s attempt to counter CNN’s investigation into the claims that Abby left The View because the network refuses to rein in Meghan. “They threw Abby under the bus,” a source told The Daily Beast when asked about the rumor that she was already getting the axe. Except, here’s the thing, both versions can be happening at the same time.

The bottom line is ABC is in the Meghan McCain business. They clearly like that she throws a goddamn hissy fit almost every day and could give two shits if Abby brings a Republican viewpoint to the table but without being a pampered-ass Godzilla about it. That’s “boring.” So it only makes sense that the network would do nothing to curtail whatever nonsense Meghan is causing off-camera and probably wouldn’t think twice about canning someone who was starting to make a stink about it. Which is why I especially love the moment in Abby’s goodbye when Meghan says, “Oh my gosh, you have to come back,” when everyone at that table knows exactly what went down, and she did it to her best friend. God only knows what Meghan would do to the rest of the panel, besides making them sit next to a shrill Hot Pocket full of hate Monday through Friday, and holy shit, that’s her plan, isn’t it?