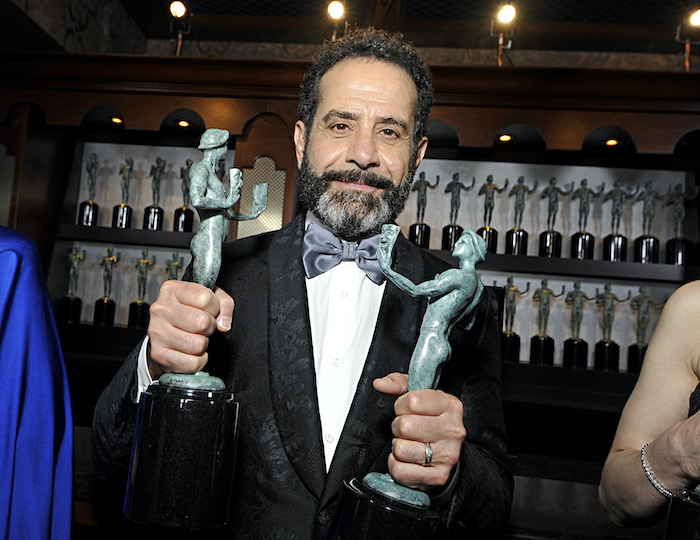 Tony Shalhoub, of Galaxy Quest fame (over 20 years later, that movie still rocks), has a lot of awards. Like, a lot, a lot. I think the scientific term for how many awards he has is a metric f*ckton. Last night he added to his haul by getting two SAG awards for his role in The Marvelous Mrs. Maisel. It’s the second year in a row he’s received that haul. For contrast, I have received no award this year except for not being my mom’s least favorite, which does not come with a trophy or a cash prize, so there’s that.

Remember Monk, that show that no one I knew watched but was on for about a million years? He was nominated for an Emmy for that character 8 times in a row. He won three! He won this year for The Marvelous Mrs. Maisel, a show I also don’t watch. (What can I say, if it’s not on Bravo or in the Law & Order universe, you’ll have a hard time getting my attention.)

If you’re here, you’re probably curious as to how many awards Shalhoub has won in his career (and are probably pretty ticked none of the big ones were for Galaxy Quest, because really, that movie is quite good.) I’m not going to leave you hanging—here’s the list, which I’ve culled from very accurate sources. Well, Wikipedia and IMDB:

Tony: Nominated four times, won once in 2018 for The Band’s Visit for “Best Actor in a Musical.” Musical! Did y’all know Tony could sing? I didn’t! Here’s a random YouTube video I found of him singing on Wings, a show I also didn’t watch. I’m starting to think I take Tony Shalhoub for granted and need to better familiarize myself with his work outside of Galaxy Quest.

Daytime Emmy Awards: He’s been nominated and won once for The Band’s Visit,for “Outstanding Musical Performance in a Daytime Program.” FYI. That’s as many wins as Susan Lucci but obviously not as many nominations as hers.

Grammys: Hell yes he’s been nominated for a Grammy, too. In 2009 for Best Spoken Word Album. He didn’t win, but come on, he’s Tony Shalhoub. Just give him time!

If you have one takeaway today, it should be that Hollywood f*cking LOVES to give Tony Shalhoub awards—and why shouldn’t they, he’s Tony frickin’ Shalhoub! If you have two takeaways, it’s that Galaxy Quest is pretty awesome. If you have three takeaways, please tell me what the third is, because by my count, I only spot two.

Keep in mind that this award count is only accurate for today, because tomorrow, he’ll probably win another award, because again, Hollywood f*cking LOVES Tony Shalhoub. Don’t we all?

← 'No Other Option,' Says Prince Harry About Stepping Back From Royal Family | What Are the Rules for the Trump Impeachment Trial? →