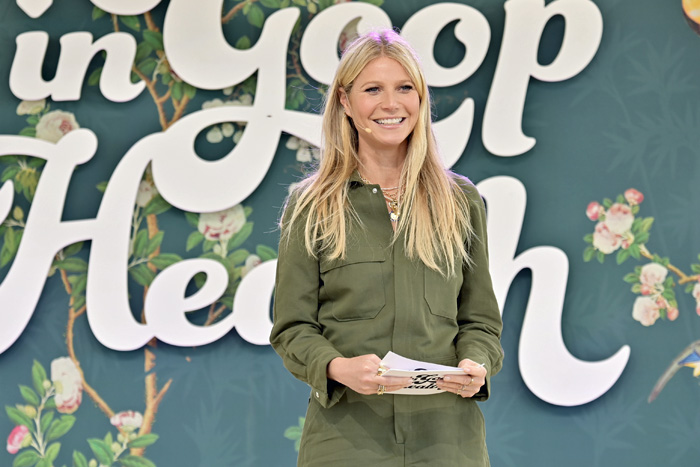 A while back, Roxana made the mistake of telling me that there’s a “Goop Men” newsletter, so naturally, I signed right the hell up because you know who’s always great for content? A woman who tells people to jam a rock up their sex canoe. There’s no way that wouldn’t be a treasure trove, and then I completely forgot about it as centuries passed.

Until today, when Gwyneth Paltrow tried to electrocute my penis.

Not gonna lie, that’s a *solid* photo choice. (Yup, it’s going to be like this the whole time.)

For the record, I don’t have erectile dysfunction — Yet! — but I honestly should’ve seen this one coming. Gwyneth has practically cornered the market on selling white ladies over-priced wellness “cures” like stinging themselves in the face with goddamn bees, pouring coffee into their butts, and literally bringing live snakes into the bedroom so their husbands don’t get bored and leave them. As a self-proclaimed reservoir of feminine energy, Gwyneth is oddly focused on not just making sure women look eminently f*ckable to the male gaze 24/7, but that they also have a bag of tricks that includes a f*cking reptile show so said males don’t lose interest and have every right to bang their secretary. (Did you forget to rub his balls with an armadillo, Karen? Then what did you expect.)

So with all of that stuff in mind, it really shouldn’t come as a surprise that Gwyneth is finally reaching for the largest snake oil hose there is: Making boners work. It’s actually a testament to her willpower that Gwyneth didn’t dive into these waters sooner because talk about stealing gluten-free candy from a man-baby. Anyway, if you’re at all interested in the original Goop article, which you shouldn’t be, I’ll give you the Cliffs Notes:

It’s about shocking your dick.

Coming from someone who’s read so many Goop articles that I have dreams about licking geckos to stave off baldness, this one was remarkably concise and to the point. It’s literally a short Q&A about the burgeoning field of electrocuting dicks until they get hard, which of course, is an actual thing. We haven’t found a cure for cancer yet, but somehow there are 47 million clinical trials on how to fix a boner. Splooge… finds a way.

Because I’m a serious journalist, I did some research in an Incognito Window or else the rest of my online existence will be nothing but ads screaming, “Hey, wanna shock your broken dick?!” According to Urology Times — title of Trump’s Russian sex tape — shockwave therapy for erectile dysfunction actually kinda works. And I say kinda in the most medical sense of the term because most of the physicians interviewed agreed that, for now, the method shouldn’t be used out of research testing. Not to mention, it sounds pretty inconvenient.

Drawbacks of the therapy are that urologists and others would offer it as an in-office treatment that would require patients to make several office visits.

“Each of the treatments are about 30 minutes long,” Dr. Ramasamy said. “The biggest drawback is, you don’t know who is going to respond and who isn’t.”

Another potential drawback is cost. When providers use it off-label, outside the research setting, shock wave therapy protocols can cost from $3,000 to $6,000, according to Dr. Ramasamy.

When it comes to sex, women already have the patience of a saint and the judgment of a gambling addict because there’s a 99.9% chance it will range somewhere between awkward and a recurring nightmare. So I’m just trying to imagine a scenario where a consensual agreement has been reached, but the party that’s almost definitely going to end things early says, “Okay, great, perfect. Now sit tight for a couple of days while a doctor electrocutes my dick to the tune of my entire 401k. Love ya, honey!”

That’s grounds for murder. You should be allowed to murder someone for that. At that point, you really need to start looking into model trains and becoming very zen about your wife taking yoga. You had a good run. But is that what’s going to happen? No. No, it is not. If commercials have taught me anything, it’s that men spend their entire golden years defying god and nature in the never-ending pursuit of sticking it in. Only now, Gwyneth Paltrow will be right there holding a car battery to zap you in the dong.

But don’t worry, it runs on essential oils!