Gemma Chan Once Pole Danced With Celine Dion. What Have You Done With Your Life, Lately?

I don’t necessarily believe that movie stars or celebrities have a better life than me—after all, I own two copies of Fear on blu ray, who the f*ck are they?!

That goes double ever since I quit a regular office job and ventured out on my own into the great, fast-paced world of the Beanie Baby resale market (if my projections hold true, we’re due for a massive uptick in that market any day now. You might want to bulk up your inventory. That’s a pro-tip from me. The grown woman whose entire financial life is built around stuffed animals.) See, my life exponentially improved once I no longer had to be somewhere 5-days a week at an arbitrary time and place, having to pretend that the office coffee wasn’t terrible and that I actually did want to hear about what people did on their weekend when it didn’t involve ghost hunting, deep-sea diving, or what Beanie Babies they found.

For me the appeal of being a celebrity was always the money and never having anywhere they necessarily had to be at any given moment. Once I solved for that in my own life, I magically stopped secretly wishing that I could be one of them. Problem solved, right?

See, every once and a while, some dumb anecdote comes out and I think to myself “Damn! … I wish I was your lover. That’s a good song, why don’t I listen to it more? I wonder what happened to Sophie B. Hawkins? I should Google that. Her other song was better though. The lay me down to sleep one. What was I thinking about before this? Oh, yeah, I kind of wish I was a celebrity because that particular story sounds fun. What should I have for lunch?”

I mean, we know you were going to go track this down before you read the anecdote, right? Because it’s basically all in the headline anyway, so what’s the rush. Let’s be honest, here.

OK, now that that’s out of the way, here it is: The time Gemma Chan and Celine Dion pole danced on a bus after the Met Gala.

I’ll let Gemma explain because I wasn’t there, and also, I would go off on a tangent about Heather Nova, who was very much like Sophie B. Hawkins back in the day.

Putting the “crazy” in Crazy Rich Asians, actress Gemma Chan admitted things got a little wild on the bus that ferried guests between the Met Gala and the afterparty — but the responsibility lies with diva Celine Dion. “She was an absolute f—ing legend … It was the best half an hour of my life,” Chan told The Guardian, before swearing the video of the moment will never be seen. “I can’t believe it happened. Nothing will top that. I pole-danced on a bus with Celine Dion.”

It kind of says all you need to know about both Gemma and Celine—that they are the type of chicks who do that, which also means they are a lot of fun. File that away in your celebrity knowledge database. Right next to snippets of Joan Osborne’s “One of Us” lyrics because for some reason, I’m on a ’90s lady singer/songwriter kick today.

Anyway, “It’s All Coming Back to Me Now” is by far and away Celine’s greatest banger, so I like to imagine the two ladies pole danced to that because it would add a layer that again would just be fun, so let’s go with that. Also, 1996 is one of the greatest years for ladies’ hair and makeup ever. Discuss.

BTS Are Breaking Up the Wrong Way 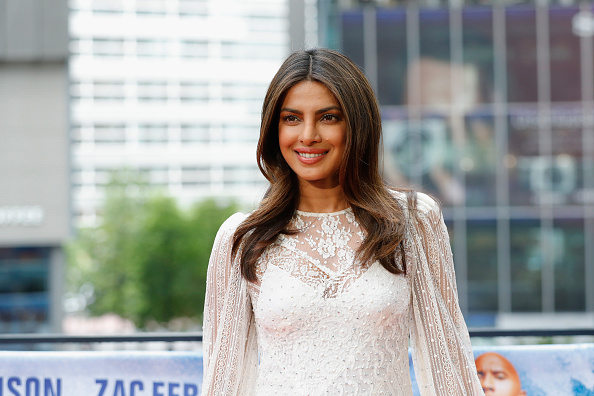 Priyanka Chopra Did Not Respond Well To Being Called a 'Hypocrite'