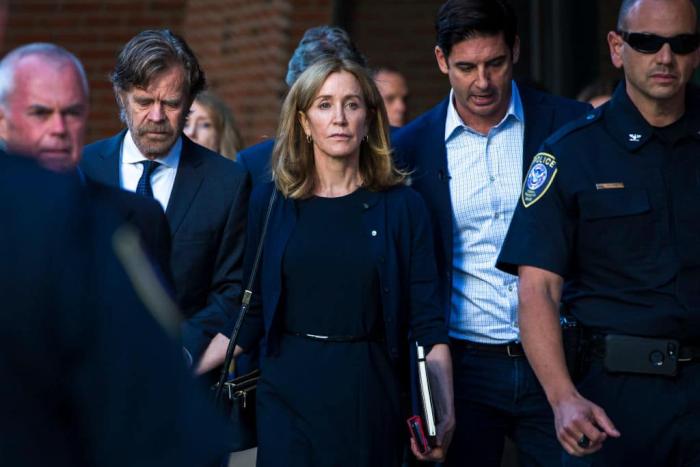 Felicity Huffman is now in jail. The actress reported to federal prison in Dublin, California, yesterday morning to begin her two-week sentence. Yes, it’s not a massive amount of time and there’s a solid chance she’ll be out by the time I finish writing this post, but hey, did any of us really think she’d even get sentenced to hard time? The system’s always trying to keep the rich white lady down.

Huffman pleaded guilty to one count of fraud, admitting to paying $15,000 to consultant Rick Singer to cheat on her daughter’s SAT test. She will also pay a $30,000 fine and deal with a year of supervised release and 250 hours of community service. People had previously obtained the letter that Huffman wrote to the judge, apologizing for her misdeeds and asking for leniency, although it didn’t exactly help her case when she said she ‘didn’t and don’t care about my daughter going to a prestigious college’ but ‘wanted to give her a shot at being considered for a program where her acting talent would be the deciding factor.’ Huffman’s daughter, Sophia Macy, was not involved in the scandal — unlike Lori Loughlin’s daughter, influencer Olivia Jade — and was reportedly devastated to discover her mother had meddled in her SAT scores like this. She will now, according to TMZ, retake the SAT tests.

As noted by Variety, Huffman was the first parent sentence in Operation Varsity Blues, the investigation into the wide-ranging level of cheating in college admission programs. Several other parents have since been sentenced to terms ranging from probation to five months in prison. As with all mega-rich people who try to circumnavigate the system, they’ll probably be fine.

← Trumpdates: Of Course, John Bolton Is Involved. Plus, Hunter Biden Pokes His Head Out | 'Wheel Of Fortune' Contestant Says He's Trapped In A Loveless Marriage In Intro →