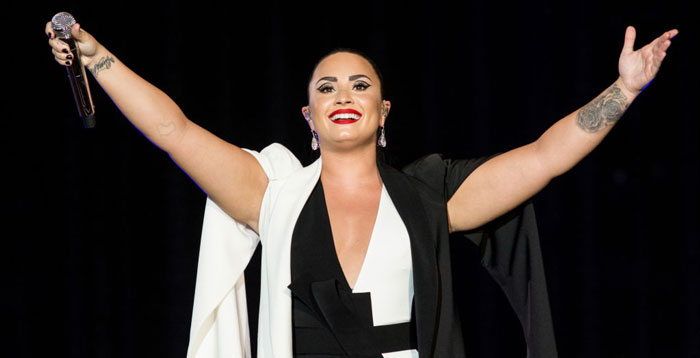 It seems Demi Lovato may be the latest victim to be hacked, leading to a leak of private nude photos. We’re saying “may be” because the photos released on her SnapChat have not be confirmed to be real; they could be a look-a-like or photoshopped. However, The Blast is confirming her account on the social media platform was hacked on Thursday night with a post of the alleged nudes with a caption that read: “Join this discord server for my nudes.”

Swiping up on the post linked Snapchat users to a Discord account called “The Chuckling Squad,” where they were urged to sign up for the social media platform to see more. The Blast reports the hacking group responsible for taking over Twitter CEO Jack Dorsey’s Twitter account and leaking another female celeb’s nudes is claiming credit for the hack. The photos in question have been pulled from SnapChat.

Lovato has not yet issued a statement about the hack and alleged nudes. And she may not, as the singer has been dealing with the death of a close friend, Thomas Trussell III, who The Sun reports lost a battle to drug addiction. She recently commemorated his life with a tattoo and a post to Instagram.

A T for Tommy. RIP you special angel. Love you forever @sirtruss 🖤💔 thank you for the ink @rafael_valdez.. it’s beautiful and I’m so grateful for this 🙏🏼🙌🏼 If you or someone you know is struggling with addiction, please do not hesitate to ask for help. Please call 877.921.9653

In the wake of all of this, Lovato’s fans—known as Lovatics—have taken to social media to rally around the singer, posting words of support and flooding Twitter with non-nude photos to try to drown out the jerks who might be sharing screenshots of the allegedly stolen pics.

tweet your fav pics of demi with “demi lovato” in the caption & hashtags like #demilovato to help fill those searches with our photos/posts!! ♡ pic.twitter.com/VI2JwZCGtr

Demi Honestly has nothing to worry about. Watch how fast we forget about this. I’ll give it 2 days. Just wait on it #DemiLovato pic.twitter.com/C2p6OPRy2C

Demi got out of a dark place and y’all sure as fuck trying to put her back. #DemiLovato

If a single person I am following posts a Demi deserved the leaked nudes tweet, I'll block you. That is a promise. I'm not that big of a Lovatic these days but NO ONE deserves this! #DemiLovato

Here’s the key thing: It doesn’t matter if those nudes are authentic. If Lovato chose to take naked pictures of herself, that’s her business. If she had them on her phone or on the cloud, that does not give a hacker license to steal them. Slut-shaming the victims of nude photo leaks or blackmail plots does nothing but make them victims once more while acting like the criminals who are hacking them and stealing from them are blameless in their crimes. (Looking at you, Whoopi.) The public is not owed private photos of celebs, so looking for leaked nudes is a violation of their privacy and their bodies. Full stop.

We wish Lovato condolences and privacy in her time of grieving.