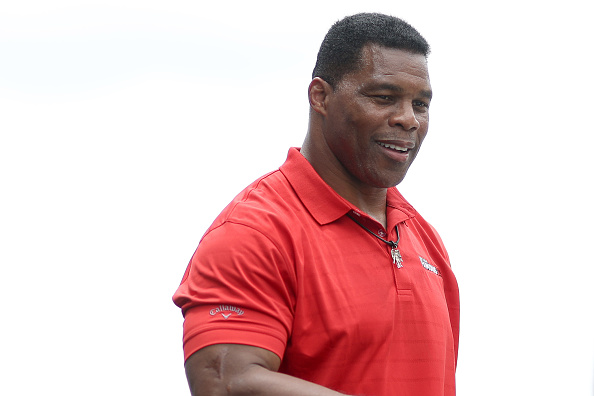 I’m wading here into territory I don’t completely understand, but from what I gather, Christian Walker — the son of Georgia Senate Candidate Herschel Walker — is an “influencer,” whatever that means these days. He’s got half a million Insta followers, and 250K Twitter followers, and apparently, they like him?

I don’t know how you make a living from this, but yesterday, he went to a Starbucks drive-thru line and harassed a barista for having Pride flags up and not American flags. I only knew this in the context of musician/dancer Kehlani, who just happened to be ahead of him in the Starbucks line and warned the barista that there was an asshole behind her. Christian Walker didn’t take kindly to being called an asshole, got out of his car, and started berating Kehlani. He posted it to Twitter thinking it made him look good?

This mediocre singer that everyone’s forgotten about, Kehlani, told my baristas at Starbucks that I was an “a**hole” and to be “safe around me.” Well, I set her straight.

I’m tired of these fake woke people being rude to everyone and acting like they’re the good ones. pic.twitter.com/V6X88Wg8tX

Now, this was my first introduction to Christian Walker, only you can’t see Walker in the video. Look: We all walk different paths, and stereotyping is bad, and no one should be labeled or put into a box, and shame on me because this guy is definitely not who I expected when I thought of the son of an NFL player ranting about American flags.

This rant kind of broke my old-ass Gex X’er brain.

put the rainbow flags back in the closet, it’s AMERICA MONTH 🇺🇸 pic.twitter.com/HeRkmc7oTV

And again, books and covers and all that, but this twisted my brain into a pretzel in the same way that watching a man shoot a shotgun while celebrating his freedom from England and, uh, Delta Dental while wearing … Daisy Dukes did.

This dentist from Michigan has a message pic.twitter.com/uBYtIWrTLS

So, I took a quick tour of Christain Walker’s Twitter account, and Wow! does this guy hate Pride Month.

Pride month makes no sense. You have all your rights, now SHUT UP. Your sexuality is not an accomplishment.

Leave everyone alone and stop projecting your insecurity. pic.twitter.com/DlhzarvVyk

And I know what y’all are thinking, but I think this clears it up … ?

Pride month is starting so I’d like to announce to everyone that I’m NOT gay. I’m attracted to men but I refuse to identify with the rainbow cult. I don’t believe in indoctrinating children. My whole identity isn’t my sexuality. And I don’t go to gay bars. Don’t call me gay.

So, he’s not gay, he’s attracted to men, he hates Pride month, he berated a Starbucks employee but also believes that you should be kind to service workers.

Rich people are rude to workers. I grew up financially blessed, and I am specifically extra kind to anyone serving me or helping me. I find it grotesque when I'm around people with money who treat workers like their slaves. And it's often.

I know that it recently came to our attention that his father had three children he abandoned, didn’t tell anyone about, and at least in one case, had to be forced through a paternity test to pay child support. That’s interesting!

Truly, all of this has been a valuable lesson about Gen Z. I think the take home is this: Politics and identity don’t always align the way we’ve been taught, and no one should understand this more than I. Also, there’s a lot of social media clout in hypocrisy.