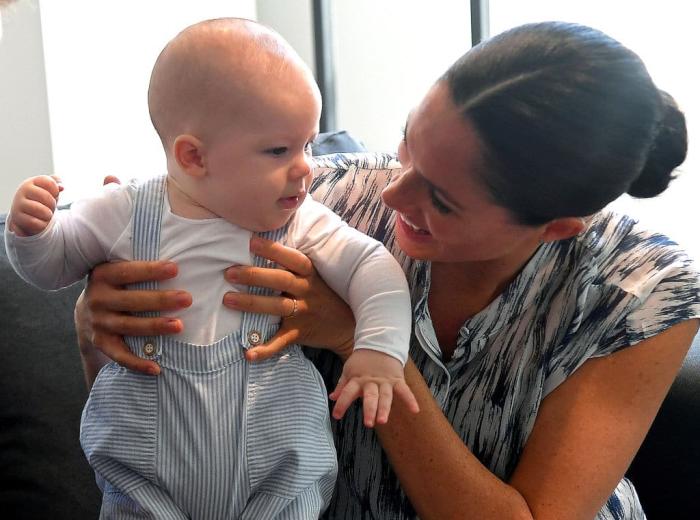 As part of fundraising efforts for Save the Children’s Save With Stories coronavirus fund, Harry and Meghan released a video of Meghan reading a book to their son Archie on his first birthday. The initiative has seen dozens of well-known public figures reading children’s stories online to raise money. It’s the first time the couple has released an official image of sorts of their son since they left their positions as full-time royals and moved to North America, and it’s a very cute video of a mother reading a story to her enthusiastic son while his dad cheers them on.

"Duck! Rabbit!" with Meghan, The Duchess of Sussex (and Harry, The Duke of Sussex behind the camera), read to their son Archie for his 1st birthday. Happy Birthday, Archie! . Thank you #DuchessMeghan for helping us to raise urgent funds for our coronavirus appeal by reading "Duck! Rabbit" by @akrfoundation, illustrated by @tlichtenheld (published by @chroniclekidsbooks). . As the world grapples with the coronavirus pandemic, children’s lives are being turned upside down. By donating to Save with Stories, you can support the most vulnerable families in the UK and around the world by helping to provide early learning packs, supermarket vouchers, essential household items and virus protection. . Please donate today by visiting our website. Link in bio. . Or you can text STORIES to 70008 to give a one-off donation of £5. . Together, we can help families get through this. . You can only donate via text from a UK mobile. You’ll be billed £5 plus standard rate text message. We receive 100% of your donation. By texting STORIES you agree to calls about fundraising appeals, campaigns, events and other ways to support. Include NO PHONE to opt out of calls. Queries? 02070126400. Read our Privacy Policy savethechildren.org.uk/privacy The Save the Children Fund is a charity registered in England and Wales (213890) and Scotland (SC039570) . #SaveWithStoriesUK #SaveWithStories #GrowingThroughThis

Of course, it didn’t take long for the usual gaggle of anti-Sussex obsessives to find ways to decry this act of charity as an act of narcissism. The most vocal cries came, surprisingly, not from the British tabloids but from an American author of chick-lit: Emily Giffin.

Best known for books like Something Borrowed, the New York Times best-seller has something of a bleak online reputation. I remember her most from my book blogging days when her husband obsessively attacked a fan of Giffin’s for leaving a one-star review on Amazon. She was known as one of those authors for whom writing any sort of negative criticism of their work online would put you at risk of personal attack, so as a rule, I stridently avoided her books. Now, it seems, that she has turned that anger towards the royals. Describing herself as an Anglophile and royal watcher, Giffin’s Instagram page is chock-full of fangirl coverage of the Windsors. Most of it is your typical bland reposting of popular images and the like, but a lot of it is also undeniably bleak in its view of a certain Ms. Sussex.

Giffin caught the public’s attention this week with a series of Instagram stories aimed at Meghan following their Save the Children video. She shared a conversation with a friend where she claimed that Meghan was ‘fake and forced’ in the video and that she ‘seemed so unmaternal.’ A screenshot of the video had the words ‘Happy birthday, Archie. Go away, Megan’ (sp?) written across it. She also tagged in an anti-Meghan Instagram account to show off one of her captions where she got even angrier that Megan (still spelled incorrectly) didn’t let Harry read the story to her son. This series of strangely furious attacks on Meghan led to enough backlash that forced Giffin to issue a classic non-apology where she claimed that her analysis of the royals was part of her ‘honest, unfiltered way’ and that she had once been a Meghan and Harry fan but found ‘fault with the way BOTH she and Harry handled things’ regarding their split from full-time royal life. If this was an attempt by Giffin to deflect from her months of bafflingly rabid anti-Meghan sentiment then it didn’t work because all of that stuff is proudly centered on her social media.

Take a gander across Giffin’s Instagram account and you’ll find a whole array of sadness. Check out the ‘royals’ collection of Stories and you’ll find multiple videos of her getting angry at the name Archie, including getting her Uber driver to join in on the mockery and dragging some drunk guy in a bar into her mess. While calling herself a feminist, she insists that Meghan is a controlling wife who squirreled Harry away from his family against his will. She frequently reposts the work of Gary Janetti, a ‘satirist’ who uses Prince George as the avatar for his own misogyny and racism towards Meghan. Check out the comments of any of these posts and Giffin continues digging the hole as well as liking comments that declare how Meghan’ ruined his relationship with his family’ and ‘utilized her status to further her acting career.’ Not that it even needs to be said but remember that Meghan hasn’t acted since her engagement outside of narrating a documentary for a streaming platform wherein she gave all her proceeds to charity.

I'm going to write about this in the morning but let me tell you, there are some GEMS in Giffin's Instagram account. pic.twitter.com/suSPCzFZPD

Look at the videos she put up on her IG stories obsessing and hating on Archie’s name! She’s an evil woman who follows Meghan hate pages and laughs with Meghan bullies. She can’t even sleep without thinking about Archie’s name! pic.twitter.com/xoG2nCtx8e

Just heard back from Emily Giffin's rep, her statement is below.


Falling down Giffin’s black hole of hatred is a very strange experience, mostly because she’s a well-known author with a sizeable fan-base and the idea of her putting her name and face to the sort of screeds one typically finds in the comments section of the Daily Mail seems inadvisable from a business perspective. Of course, nothing Giffin has said is especially unusual, unfortunately. She is merely spewing the company line when it comes to the misogyny and racism Meghan Markle has faced since stepping into the spotlight as a royalty-adjacent figure. Her comments are par for the course on any number of social media accounts or in the columns of royal reporters and tabloid muckrakers like Dan Wootton. Really, she is saying nothing new here. The reason it caught the world’s attention now and not months ago is that she included a one-year-old child in her rants.

The fact that none of her attacks are new or original is part of the problem with the concept of fascination in royalty as a fandom. There’s a big difference between being interested in something and making it the center of your fan adoration, and royal fandom exemplifies this. Fandom makes you pick sides. It encourages you to indulge the worst aspects of your hobbies, or at least, it does so when left to its own devices (the best fandoms, in my experience, are ones that put years of fan knowledge to good use and keep sh*t in line.) Many fandoms are also reflective of the media or interests they consume. If, say, you’re in the fandom for a T.V. series and the showrunner is rude, misogynist, and queer-baiting, then fans have to contend with that mess, be it through correcting the issues or fighting that instinctive need to defend the thing they love.

Royal fandom is a curiosity in this regard. It’s not the same as loving a movie franchise or T.V. series or actor, all of which tend to be much more recent phenomena in terms of pop culture history. The monarchy is a centuries-old institution rooted in classism, imperialism, and the active encouragement of anti-democracy. Few of royal fandom’s most zealous devotees contend with this problem, especially those who are white and American and upper-middle-class because to do so would be to let the princess fantasy they love so much crumble. It would be to acknowledge the patriarchal stranglehold this concept has had over nations and empires for hundreds of years. It would be to admit that racism is at the heart of the thing you love, and we’ve all seen what happens in feral fandoms who don’t want to have conversations about race.

This is partly why Meghan Markle seems to aggravate women like Giffin (aside from the garden variety sexism, racism, and xenophobia that fuels them, of course.) The mere presence of Meghan in the Windsor clan created an impossible-to-ignore mirror that reflected back the myriad miseries and power struggles of The Firm. It shone a blinding spotlight on how this archaic institution that has tried to rebrand itself as a ‘modern monarchy’ had no real desire to do so because if they did, they would have embraced the woman whose very existence would have dragged them kicking and screaming into the 21st century. All the things that Meghan did or said — the very things that would have made a truly modern monarchy — were attacked as ‘gauche’ or ‘attention-seeking.’

Mostly, they were seen as ‘not upholding tradition’ and that’s what made women like Giffin so angry. Why would a rich white American lady care so much about the traditions of a royal family in a country she doesn’t live in? Why is the notion of a woman of color as a disruptive force to this status quo so threatening to her? That’s the racist problem at the heart of this brand of royal fandom: The unquestioning fetish of an imperialist institution requires you to commit to an agenda of anti-blackness, and anti-Meghan folks have done that with gusto. Perhaps it is time for Emily Giffin to find a new hobby that isn’t dependent on the celebration of colonialism and misogyny.

← What the Hell is Kevin James Doing in the 'Becky' Trailer? | S*it Sucks Right Now, so Let's Wallow for a Bit, OK? →