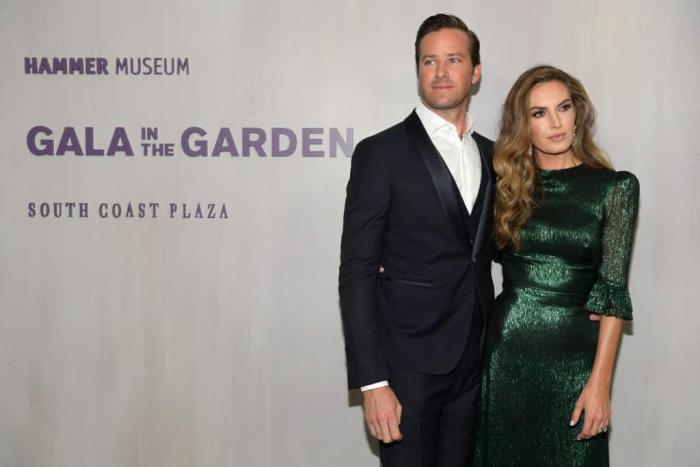 Armie Hammer remains off the grid following the myriad allegations of abuse, manipulation, and, to put it mildly, unacceptable behavior made against him by multiple women. After releasing an initial statement calling the claims ‘bullsh*t’, Hammer pulled out of the rom-com Shotgun Wedding and has since been dropped from an upcoming series on the making of The Godfather. This story continues to be messy, upsetting, and poorly reported. Many publications seem hesitant to discuss the very real allegations of abuse made by multiple women and have instead chosen to focus on the, shall we say, loopier parts of the story. It’s easier and probably safer for them to boil it down to ‘cannibal DMs’ over ‘violent sexual, emotional, and mental abuse disguised as kink.’

For understandable reasons, Hammer’s estranged wife Elizabeth Chambers has laid low since the story broke. She is residing on the Cayman Islands with her two children. Hammer is also there. As recent leaks have revealed, Hammer bragged to friends about drug tests he needed to take before seeing his kids. Chambers wrote a post on her Instagram page last night, breaking her silence on the issue:

‘For weeks, I’ve been trying to process everything that has transpired. I am shocked, heartbroken, and devastated. Heartbreak aside, I am listening, and will continue to listen and educate myself on these delicate matters. I didn’t realize how much I didn’t know.
I support any victim of assault or abuse and urge anyone who has experienced this pain to seek the help she or he needs to heal.
At this time, I will not be commenting further on this matter.
My sole focus and attention will continue to be on our children, on my work and on healing during this incredibly difficult time.
Thank you for all of the love and support, and thank you in advance for your continued kindness, respect, and consideration for our children and me as we find ways to move forward. 🤍 EC’

Chambers is currently in an unenviable position, all while trying to look after two young kids as their father becomes a figure of worldwide fear and mockery. It must be tough to go through a split like this, even without the pressure of the press waiting for you to speak up on something that they themselves have struggled to verbalize.

Chambers had previously posted on JustJared’s Instagram page with the comment ‘No. Words.’ after it was revealed that Hammer’s Call Me By Your Name co-star and director, Timothee Chalamet and Luca Guadagnino, were making a ‘cannibal love story.’

← Watch the Trailer for 'The Nevers,' the Series Created by Joss Whedon | Check Out Silver Fox Freddie Prinze, Jr. in the 'Punky Brewster' Trailer →