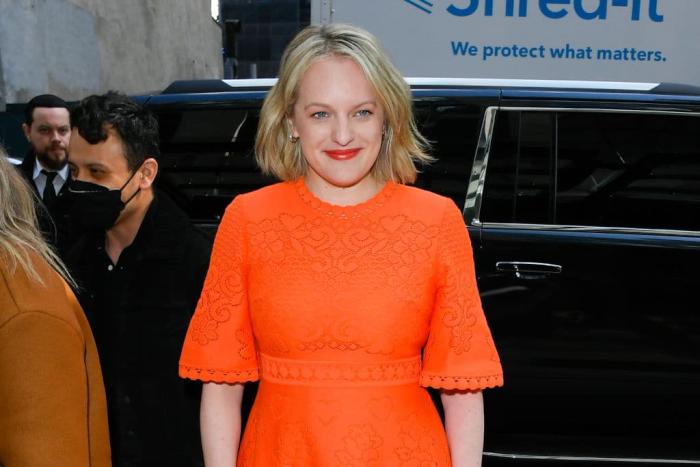 I’ve written before about my love for Elisabeth Moss. I’m a big Mad Men fan and her turn as Peggy Olson impacted me in a significant way. Since then, she’s been a scene-stealer in an assortment of films and TV series that I’ve found myself drawn to time and time again. She’s an undeniable talent, an actress with a keen eye for projects and a willingness to embrace prickly characters who defy restricting notions of the traditional protagonist. She’s also a Scientologist, and that means contending with the perennial elephant in the room whenever the subject of her work is brought up.

By and large, Moss has avoided questions about her personal life in interviews, not just her connections to the Church of Scientology but with her former marriage to Fred Armisen and rumored romances with various men. She’s been in the industry since childhood and has never been defined as that kind of shining megastar who attracts obsessive attention over her life outside of film and TV. Profiles of her never stray much beyond the work itself. Moss has been defined more by those roles than her own life, at least in terms of how audiences understand her. When I think of Moss, I don’t think of a celebrity on the red carpet. I think of Peggy Olson and June/Offred and the prickly women she’s embodied. I think of Shirley Jackson or Robin Griffin or Becky Something, a role I consider to be her finest work in film. Vulture declared her to be ‘the Queen of Peak TV’ and it’s a title she earned. She’s one of the defining actresses of this era of prestige television.

And she’s also a Scientologist. Moss was born into the Church, whose reputation and extensively documented abuses I don’t have to repeat here. Scientology has long been characterized by its chummy reputation with A-List celebrities, using the allure of fame as a recruiting tool and handy source of revenue. There seemed to be a brief period where the most famous people on the planet were all either signed members of Scientology or in some way adjacent to its celebrity centers. Nowadays, however, their numbers seem far less glowing. Tom Cruise remains the almighty number one worshipper, of course, but other major figures like John Travolta seem to have pulled away from the promotional spotlight. Beck left Scientology behind but not before letting people know that he never actively participated in the Church. So have Lisa Marie Presley and Laura Prepon. Leah Remini broke away from the church and eventually became its biggest opponent through her memoirs and various docuseries detailing Scientology’s crimes. Once upon a time, Scientology seemed mysterious and glamorous at best, or just a private matter to not be dissected in the press or public. Now, it’s irrevocably toxic and not something its members seem encouraged to brag about. There are exceptions, like Michael Peña, but it doesn’t seem to be worth the PR fallout to declare oneself a proud Scientologist anymore.

I assume that’s why Moss never felt the need to explain herself much in interviews. She’s a prominent actress still at the top of her game, and one whose work is consistently associated with progressive and women-driven ideals. You can’t complicate that by bigging up your cult that has a nasty habit of all but enslaving people and forcing women to have abortions.

So, it was quite a big deal when, last week, Moss gave an interview to The New Yorker where she openly addressed Scientology. It wasn’t the first time she’d done this but it was new to see her go this deep and, frankly, be this adoring of her religion. The interviewer, Michael Shulman, notes how it’s tempting for many Moss fans who struggle with their love of her feminist pop culture icon characters to see her as someone who’s ‘just culturally Scientologist, like a Jew who goes to temple only on Yom Kippur.’ But that’s not the case. While Moss, when asked about it, prefaces her answer by saying she doesn’t ‘want people to be distracted by something when they’re watching me’, she then launches into what reads like a press release for the church.

‘I would just encourage people to find out for themselves’, Moss tells Shulman, who notes that it’s ‘a line she would repeat several times.’ Moss adds, ‘obviously something like religious freedom and resistance against a theocracy is very important to me.’ This is in relation to Shulman asking how she can reconcile her faith and its reported abuses with the authoritarianism she opposes on-screen in The Handmaid’s Tale. It’s an unsatisfying answer, to say the least, but not a surprising one. Still, this interview is fascinating because it frames Moss’s comments as a curious outlier to Hollywood’s changing perceptions of Scientology. Shulman doesn’t skimp over detailing the organization’s abuses and the accusations made against it. There are plenty of quotes from former members of the church and whistle-blowers too. It makes Moss seem like a loner in this context and not in a good way as is often the case with the characters she plays.

Moss’s characters have never been tangled among the weeds of Scientology. For many fans, myself included, it was easy to revel in the disconnect, unlike the way that Tom Cruise’s move into playing invincible superman makes it hard to see him as a real person rather than a Scientology golden boy. Indeed, Moss’s work seemed to encourage an opposing reading. It was always a branding basis built on shaky foundations. How long can you position yourself in progressive and feminist terms (especially as a cishet white woman with money) before it falls under scrutiny? Adding Scientology to that mixture just puts a ticking clock on the inevitable. So, Moss making herself indelibly pro-Scientology and a major publication refusing to let that be the end of the conversation does change matters somewhat.

I don’t expect to see Moss suddenly lose work in the industry. They continue to hire people way worse, so why stop now? Moss is also a producer and director with real clout to get her own projects made, plus she’s a critical darling, even among Scientology skeptics. There’s a moment in the New Yorker profile where The Handmaid’s Tale author Margaret Atwood is asked about Moss’s faith and she questions the power structures more than the tenets of its faith. ‘As far as I can tell, there’s a Hollywood version of Scientology. I mean, the origins are just batty, but compared to what?’ It’s a complaint that comes up a lot with the church. Isn’t the Catholic Church rooted in some questionable theology, and isn’t it just as guilty of structural abuses as Scientology? Sure, we could go down that route. There’s certainly plenty to get into. But it’s also a deflection: We know that Scientology is abusive and uses its untold millions and celebrity clout to continue intimidating those who speak out against it and its tax-exempt status. Noting that is hardly a radical concept.

I can’t claim that I’m never going to watch another Elisabeth Moss film or stop enjoying her work. My job requirements alone mean that making such a choice is impossible. But I know plenty of people who will. Scientology may not be the invincible bully of mystique that it once was, but it still doesn’t pay taxes and a hell of a lot of people are still being hurt by its machinations. Any celebrity at this point in time who wilfully excludes themselves from that reality doesn’t get the benefit of the doubt anymore, especially when so many major names have left the church and called it out. I imagine it must be tough to leave behind something you were born into, especially when total elimination from your loved ones comes with it. Still, whenever Moss talks up the feminist credentials of her next project, regardless of how interested I am in it, that elephant will still be in the room with her, looming ever larger and increasingly hard to ignore.