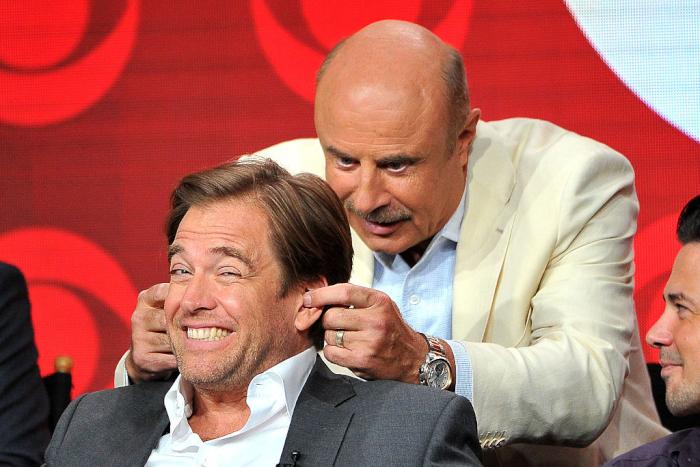 Dr. Phil is one of those American phenomena that I knew barely anything about until relatively late in life. I’ve been aware of his existence for a very long time, but because I don’t live in the States, his essence was pretty much limited to references in other sources. The Simpsons, stand-up comedians, American films. They all took a potshot at him here and there. Not being interested enough in the topic, I would never bother looking further into it, and I just left the auxiliary departments of my brain to piece together a picture of what ‘Dr Phil’ might be. There’s only so much time and energy we’re allocated in this life after all. If I’d have spent it actively looking into every single reference thrown at me by the torrent of American media I consumed in my formative years, I’d have done nothing else, and I’d have a bunch of knowledge that I frankly neither need nor want. Anyway, when it comes to Dr. Phil, I still know relatively little about this strange immoral shiny-toothed millionaire grifter whose presence and gaze I find extremely disquieting. But one thing I do know now is that the house he’s lived in for the past decade-and-a-bit, and which has now been put up for sale, is an absolute hurricane explosion of straight-faced kitsch and Hunger Games capital delirium that almost by itself justifies all the potshots taken at the dude. I mean just look at the state of this:

My first thought was, ‘Are those guns? They can’t actually be guns. The man’s not a literal cartoon.’ But, well, yes, yes they are, and yes he is.

The disquieting weirdness goes to stranger places than just an arsenal of firearms on fetishistic display:

I have so many questions that don’t even involve the guns pic.twitter.com/x0KdBjyea2

Look I know this is common knowledge—that the wealthy have way more fu*king money than sense and they use it to feather nests for themselves in ways that just defy any sort of notion of good taste or reason; and furthermore I know that that’s completely their prerogative, to do with their money (which they’ve definitely earned by the hard sweat of their brow performing functions supremely vital to society) what they want; but also I don’t care how commonplace it is, and each time I see something like this it punches me in the teeth. I hate it. I don’t get it. And it’s indicative of a lot of big, big problems with the way things are. We need a revolution.

But yeah, sure, I’ll take the weird little orange man thing if it’s available. Would really tie my bathroom together.

Oh and while we’re on the subject!

Here, the best thing Dr Phil has ever been associated with:


← Kevin Feige Walks Back Promise of Trans Representation In The MCU, Because Of Course He Did | A Brief Explainer of the Kushner Shade Thrown at Karlie Kloss on Last Night's 'Project Runway' →