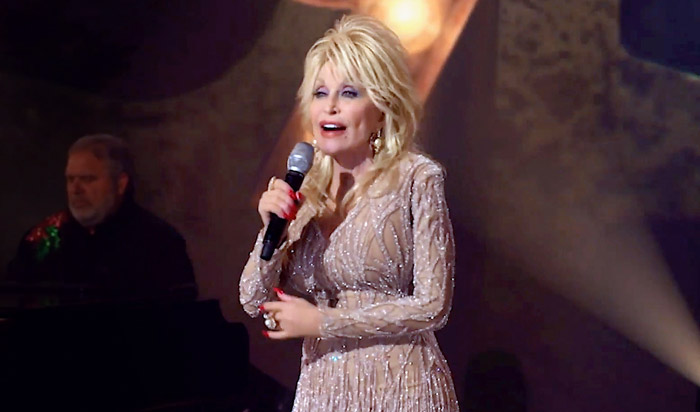 Dolly Parton News Round Up: COVID Vaccine, Medals Of Freedom, Statues, And Switching Up "9 to 5"

Dolly Parton is scoring all kinds of headlines this week, so we’re reveling in the wonders of this incredible artist/philanthropist with an all-Dolly news round up!

That the 75-year-old multi-hyphenate is a national treasure is not up for debate. So, awarding Parton the Presidential Medal of Freedom could have been the least controversial thing “Number 45” might do in his time in office. But he failed. Why? Because Parton turned him down. Twice.

Appearing on Today yesterday, Parton revealed Tr*mp had offered her the honor on two separate occasions. However, she insists it wasn’t politics that motivated her refusal, explaining, “I couldn’t accept it because my husband was ill and then they asked me again about it, and I wouldn’t travel because of the COVID.”

You might think, well, Biden can give it to her once the U.S. finally gets COVID under control, THANKS IN PART TO THE VACCINE PARTON HELPED FUND! However, she might decline again, because after turning Tr*mp down twice—let’s just take a second to imagine his reaction to this news. TWICE!—she’s worried it might look political to accept at this point.

“Now I feel like if I take it, I’ll be doing politics, so I’m not sure,” Parton explained. “But I don’t work for those awards. It’d be nice but I’m not sure that I even deserve it. But it’s a nice compliment for people to think that I might deserve it.”

Speaking of the Moderna vaccine that Parton helped fund with a million-dollar donation, she’s not yet taken it, though she qualifies because of her age. She told CNN, “I didn’t want to jump line. I didn’t donate the money so I could be protected. I did it for everybody.”

This is a noble decision, and we respect a selfless queen. However, might we suggest the world would be a worse place without Dolly in it, and if those insurrectionist congresspeople calling for coups got the shot, DOLLY PARTON DAMN WELL SHOULD!

Also, Parton has weighed in on the petition to replace a racist statue in Tennessee with a likeness of her. She’s not a fan! “I personally do not want that,” she said to CNN. “I think that’s something that can be done after I’m dead and gone.”

Last but not least in Dolly Parton news, the 10-time Grammy winner is giving a 2021 revamp to her Academy Award-nominated anthem, “9 to 5,” for a Super Bowl ad promoting Squarespace. The new version is called “5 to 9,” singing of the experience of all those whose work hours have been expanded by side hustles that actually feed their souls. The accuracy is aching.

Props to Squarespace for giving Parton a commercial cameo that wouldn’t risk exposing her to COVID.