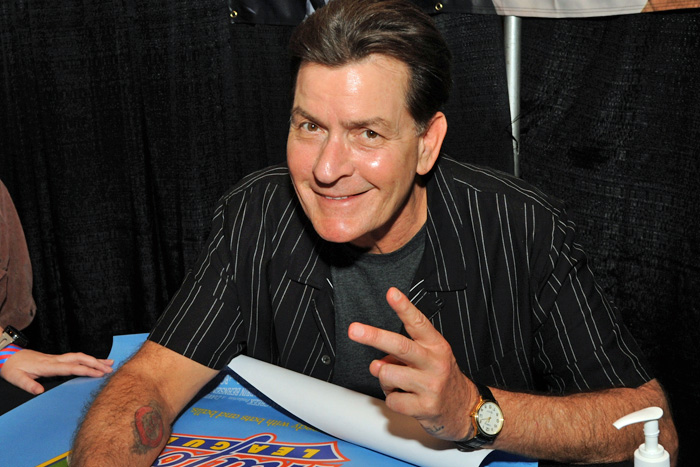 For years, Corey Feldman has been sounding the alarm about Hollywood’s shockingly pervasive pedophile problem that has preyed on child actors like Feldman and his late best friend Corey Haim. Out of fear for his safety, Feldman has refused to name names, which in light of the details gleaned from the #MeToo movement, was a very justifiable concern.

However, in a new documentary, Feldman has finally crossed the threshold and levied accusations against several Hollywood players. Most notably, Charlie Sheen, who Feldman has now named as the “A-list star” who allegedly raped Haim on the set of the 1986 film Lucas, according to Entertainment Weekly.

“This wasn’t like a one time thing he said in passing. It wasn’t like ‘Oh, by the way, this happened.’ He went into great detail,” a crying Feldman said in the documentary about Haim, who died from pneumonia in 2010. “He told me, ‘Charlie bent me over in between two trailers and put Crisco oil on my butt and raped me in broad daylight. Anybody could have walked by, anybody could have seen it.’”

Haim was 13 and Sheen was 19 when they worked together on Lucas.

Several other talking heads in the documentary also claimed either Haim directly told them he had been abused by Sheen as a child or they had heard word of it from others years later.

“He shared with me that on the set of Lucas that he was raped as a little boy,” Feldman’s ex-wife Susannah Sprague, said in the documentary, which was produced by Feldman. “He told me that it was his costar and he told me that it was Charlie Sheen that did it,” she alleged.

It’s admittedly been a few years since I’ve followed this case, but Sheen’s name has long been whispered in regard to the Corey Haim rape allegations, yet never spoken aloud because he was sitting on a ridiculous war chest of Two And A Half Men money. However, as it became clear that Sheen was pissing away his vast fortune, in 2017 he was accused by former actor Dominic Brascia of being Haim’s rapist, but two things helped Sheen slip out of that particular trap. One, Brascia’s accusations ran in The National Enquirer, so there’s a credibility problem right out the gate. Two, Brascia has also faced accusations of being Haim’s rapist on the set of Lucas, so it did stand to reason that he was attempting to deflect blame from himself. (It should be noted that Feldman’s documentary names Brascia as one of the men who allegedly abused him and Haim during their child acting careers.)

As of this writing, Sheen has yet to comment on Feldman’s documentary, but he will almost certainly issue a denial, and it will probably be an absolute gas like his response to the 2017 allegations. Via TMZ:

Charlie tells TMZ, “In my nearly 35 years as a celebrated entertainer, I have been nothing shy of a forthright, noble and valiant courier of the truth. Consistently admitting and owning a laundry list of shortcomings, wrongdoings and indiscretions this traveler hath traveled — however, every man has a breaking point.”

Charlie goes on … “These radically groundless and unfounded allegations end now. I now take a passionate stand against those who wish to even entertain the sick and twisted lies against me. GAME OVER.”

Just to paint a picture of what a “valiant courier of the truth” Sheen has always been, remember in 2015 when he came out as HIV positive and everyone treated it like an unprecedented act of bravery? He only did it because he was going broke paying hush money. Until that point, he allegedly wasn’t telling sexual partners that he had HIV, and if you know anything about Sheen, then you know that put a whole lot of people at risk.

So you’ll have to excuse me if I’m not exactly holding my breath for the celebrated and noble traveler to do the right thing here.

“These sick, twisted and outlandish allegations never occurred. Period,” Sheen’s spokesperson said Tuesday. “I would urge everyone to consider the source and read what his mother Judy Haim has to say.”

In emails sent last month to Sheen’s publicist from the late Corey Haim’s mother and obtained by TheWrap, Judy Haim wrote, “I feel that this is a huge accusation without any proof and without my kid being here to defend himself.” Corey Haim, a teen star who appeared in many movies with Feldman in the late 1980s and early ’90s, died of pneumonia on March 10, 2010, at age 38.

Judy Haim also said the alleged rape “never happened or else I would have known about it.” She added that she felt Feldman “lost his mind” and “the horrible thing is he thinks this is a great way to commemorate the 10-year anniversary of my son’s death.”

Sheen has not yet decided if he’ll sue Feldman, so it’ll be interesting to see if these accusations will finally have their day in court.

← Billie Eilish Takes Off Her Shirt In Concert, Reveals The Industry's Hypocrisy | How Meghan Markle Dressed For Revenge →