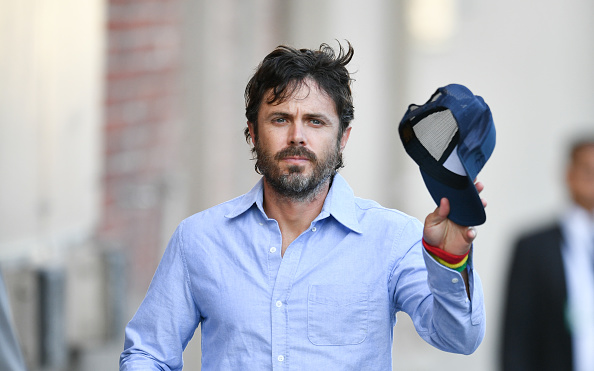 Casey Affleck appeared on Dax Shepard’s podcast, Armchair Expert yesterday, and it was a really weird interview. Affleck’s sexual harassment allegations did come up early on in the podcast, but Shepard and Affleck mostly talked around them while also talking about them, if you know what I mean. What’s so weird about it is that Shepard is a guy who clearly wants to be liked by everyone — this is something he himself has admitted many times on his podcast — and he clearly wanted to be liked by Affleck, which meant defending Affleck, when Affleck — to his credit — did not ask to be defended.

But in the first part of the podcast, it’s clearly the approach that Shepard is taking, basically saying, and I’m paraphrasing here, “Things are different now. The rules have changed. Ten years ago, men didn’t understand consent like we do now, and back in my day, we just tried to get laid as much as possible, and we kept going until the woman told us to stop. The limits of our understanding of consent were “‘no means no.’”

That’s not wrong in the abstract. Thanks to the #MeToo movement, men do clearly have a better understanding of consent now, which is not to suggest that men shouldn’t have always had a better understanding of consent. I specifically remember the affirmative consent movement advocated by Antioch 25 years ago was mocked and derided as the end of romance and spontaneity, which was bullshit then and is bullshit now.

However, as applied to Casey Affleck’s allegations, Shepard’s uninvited defense of Affleck is not even remotely on point. The allegations against Affleck involved repeated sexual harassment of an employee by the director of a film, including crawling into a bed with her while she was sleeping. This is not about an archaic understanding of consent, and Affleck didn’t even go there himself. He mostly stuck to the, “misunderstanding my role as a boss” defense, and the sort of hazy line between what is real and what is acting in the context of what was essentially a faux-documentary/mocumentary, I’m Still Here. Again, it’s not a good defense, but at least it’s not, “I didn’t understand the nature of consent.” On that point, at least, it felt sort of like Affleck was schooling Shepard, who was trying to defend Affleck (see what I mean about it being a weird interview?)

And then Dax Shepard’s assistant, the usually amazing Monica Padman, starts talking about the need for allowing for mistakes, and then Shepard says, “There has to be a pathway to redemption and forgiveness. It can’t just be ‘one strike and you’re out.’” And again, given the severity of the allegations against Affleck, this is not exactly a one strike and you’re out “Aziz Ansari situation.” This is an employee who, according to the allegations, had received numerous profane and abusive text messages and woke up one night to find Casey Affleck “curled up next to her in the bed wearing only his underwear and a T-shirt. He had his arm around her, was caressing her back, his face was within inches of hers and his breath reeked of alcohol.” And again, Affleck — in response to Monica Padman and Dax Shepard’s attempt to defend him based on the issue of consent doesn’t really go there. He suggests instead that it’s not that he screwed up; it’s that the allegations leveled against him were inaccurate. “I would only add to that, from personal experience,” Affleck says, “that what you think you know about people, you might not actually know about them. It’s not just, ‘Should we forgive this person who we have decided made a mistake or should we also allow for the fact that we don’t know them the way we think we know them when they’re just presented in the public sphere.”

In other words, Casey Affleck is saying that the sexual harassment allegations against him are untrue (but that the other allegations about him being a terrible boss who ran a messy, confusing set are true).

And then it gets super weird because after the podcast is over, Affleck clearly realizes that the MeToo conversation didn’t go so well, so Affleck, Padman, and Shepard record an addendum to clean up their mess. It’s a trainwreck, but mostly for Shepard and Padman.

In the addendum, Affleck reiterates that he’s a big supporter of the MeToo movement, and hopes that it did not come off otherwise in the first segment. He says it’s part of who he is, part of his values, etc., etc. “It’s the heart of my being, having been raised by a mother who wouldn’t even let us watch Dukes of Hazzard when we were eight years old because it was sexist. The way I’ve been thought of by certain people recently has been so antithetical to who I really am has been frustrating, because I really wanted to be a part of [the MeToo movement] but I felt like the best thing I could do was just be quiet so that I didn’t seem to be in opposition to something that I really wanted to champion.”

This is where Shepard, once again, sticks his damn foot in his mouth. He says to Casey, “so you basically had [three] options [after being sued by two women on the set of I’m Still Here]: Option one, you defend yourself and appear to be silencing victims. That’s a shitty option. Number two is you acknowledge that while the workplace that you were the boss of was not a great workplace by today’s standards for sure, and maybe 2010 standards, either … the work environment wasn’t ideal, but in no way was I doing weird sexual stuff. And then, number three, you just ignore it, and in your silence, you maybe seem guilty and shame-ridden and by talking about it, are you adding more oxygen to the fire … those aren’t great options.”

“It’s a tough spot to be in,” Affleck says, “especially if you really want to support the side that’s the angriest and the anger is being directed at you. And I sort of decided that I’ll just stay quiet, mostly. I’ve talked about it a little bit to honor that this was someone else’s experience of this. It’s not my experience, but you have to respect that someone else had an experience and take that to heart.”

He goes on to suggest, correctly, that on some level, we shouldn’t be making distinctions between the Weinsteins and the Ansaris. “Can we even make these distinctions between the worst cases and sort of what is perceived to be the tamest cases of it? It’s not like, ‘Oh, this isn’t so bad, and that’s really horrible. It is that it is systemic. It is accepted culturally at its tamest and that it all needs to be turned on its head and eradicated. Not allowed for.”

That is accurate, except for the way that Affleck seems to exclude himself from that equation. He does then reiterate that the set of his movie was a mess, that people didn’t understand the nature of the movie, and takes responsibility for that, etc. etc., while also intimating that there is disagreement about the details where it involves sexual misconduct.

And then, Monica! GODDAMNIT, MONICA. Shepard asks her what she thinks, and she says, “Well, of all the things that have been popping into my head, and I’ll get in trouble for saying this, but there is a component to this whole conversation that we don’t like addressing but sometimes women aren’t telling the truth … I’m a woman, and I’ve lied. We’re capable of doing that. And sometimes that’s missing in these conversations … it’s almost anti-feminist to say that women don’t lie.”

To that, at least, Affleck pushed back. “I wouldn’t say that it’s helpful to say that women lie. Or to approach the argument from the point of view of who is lying. It actually doesn’t help.”

So, look: It was a long interview, and a post about it is not going to provide the proper context and do it justice. I don’t even think this long piece is going to accurately reflect all the context necessary to completely understand what’s going on in this conversation. I think — having talked to two other people who have also listened to it and agree — that Dax and Monica do not come off particularly well. They sound like two people far more interested in defending a guy they like and want to like them than two people wanting to have an honest conversation. Casey Affleck, meanwhile, says a lot of right things about the #MeToo movement, it’s just that he stubbornly divorces himself from it.

Anyway, you can listen to it here and draw your own conclusions. I would definitely allow that others might have different interpretations.