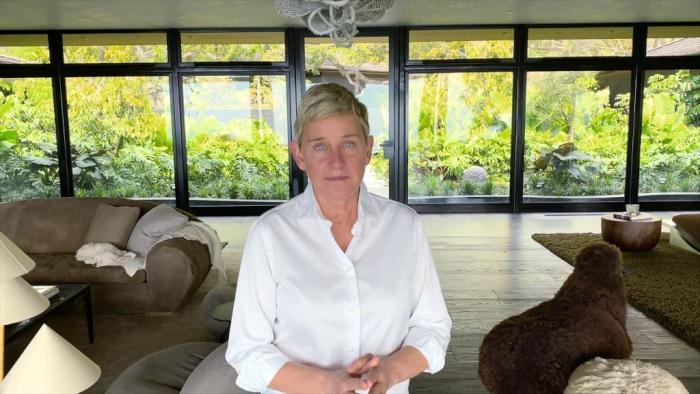 Now There's EVEN MORE Evidence That Ellen Degeneres Is The Absolute Worst!

2020 has been a very weird year for a variety of reasons that I’m sure you don’t need me to get into. In the world of celebrity, specifically, we’ve seen something of a paradigm shift occur. There’s been a notable focus on ‘eat the rich’ pop culture like Hustlers and Oscar-winner Parasite, of course, but it’s with the ongoing pandemic that we’ve witnessed in real-time the growing fatigue of audiences at large with the tried-and-tested ways of fame. We don’t want to be distracted by the uber-rich in their mansions as they claim we’re all in the same boat during this crisis that has killed thousands of people. We especially don’t want to be condescended to by people who make their living by commodifying bland platitudes about kindness and empathy as they decidedly refuse to practice what they preach.

Suffice to say, it’s not been a great year for Ellen Degeneres.

It feels like 2020 was the year when the curtain was finally pulled away from Ellen’s oft-disputed Queen of Nice facade. After YEARS of her nastiness and hostility being one of Hollywood’s biggest open secrets, it was as if we collectively decided to just confront her nonsense head-on. She’s gone from being one of the true indomitable forces in modern pop culture, one with a pristine public image adored by millions of people, to just another example of how deeply toxic the entertainment industry is.

It kicked off with comedian Kevin T. Porter encouraging people to share their stories of dealing with ‘notoriously one of the meanest people alive’ on Twitter. YouTuber Nikkie de Jager (a.k.a. NikkieTutorials) then talked candidly about how ‘cold and distant’ Ellen was when she appeared on her show. It didn’t help that Ellen herself, who by now was doing her show from her lavish home which could not conceal how unbearably awkward the entire affair had become, faced criticisms for using a non-union crew for this iteration of the series. We even saw ‘sources’ lamenting to Us Weekly that Degeneres was ‘at the end of her rope’ over these meanie rumors.

Well, now it’s gotten even more tangled thanks to an investigation by Buzzfeed that describes the ‘racism, fear, and intimidation’ faced by current and former employees behind-the-scenes of her daytime talk show. As one former employee told reporter Krystie Lee Yandoli, ‘That ‘be kind’ bullshit only happens when the cameras are on. It’s all for show.’

If you’re expecting this piece to fully dive into the increasing number of stories about Degeneres’s own reputation and hostility towards those around her, you may be disappointed. While mention is made of the oft-repeated claim that staff was ‘instructed by their direct managers to not speak to DeGeneres if they saw her around the office,’ the focus is more on the work environment itself and the ‘day-to-day toxicity’ fostered by senior managers and executive producers.

One Black woman formerly employed by the show discussed the racist comments and microaggressions she faced during her year and a half on the payroll:

She said when she was hired, a senior-level producer told her and another Black employee, “Oh wow, you both have box braids; I hope we don’t get you confused.” And at a work party, she said, one of the main writers told her, “I’m sorry, I only know the names of the white people who work here,” and other coworkers “awkwardly laughed it off” instead of coming to her defense.

When the former employee brought up issues of race and representation on the show and asked producers not to use offensive terms like “spirit animal” in segments, her colleagues called her “the PC police.”

The former employee said she was also called into a meeting with executive producer Ed Glavin, where she was reprimanded for her objections to the term “spirit animal,” asking for a raise, and suggesting employees on the show receive diversity and inclusion training.

“He said that I was walking around looking resentful and angry,” she said.

Other former employees drew attention to the company’s questionable hiring/firing practices after they were let go from their jobs or their positions were eliminated entirely following their use of medical leave:

After working on The Ellen DeGeneres Show for nearly a year, one former employee said they took medical leave for one month to check into a mental health facility for a suicide attempt. But the week they returned to work, they were told their position was being eliminated.

“You’d think that if someone just tried to kill themselves, you don’t want to add any more stress to their lives,” the employee, whose story was corroborated by four other employees and medical records, told BuzzFeed News.

Another former employee said they were fired after an unexpectedly difficult year that required them to take time away from the job on three occasions: medical leave for three weeks after they were in a car accident, working remotely for two days to attend a family member’s funeral, and then three days off to travel for another family member’s funeral. Each request was a battle with supervisors and HR, they added.

Another former employee said they were given a formal warning after they created a GoFunMe campaign to raise money for their medical costs that weren’t covered by company health insurance.

Just 24 hours after posting the GoFundMe, they said, they were called into the department head’s office and told to take it down because of concerns it might hurt DeGeneres’s image.

“They discovered my fundraiser, then got mad at me. … They were more concerned about Ellen’s brand instead of helping me out,” the former employee, whose story was corroborated by four other employees, told BuzzFeed News.

It’s not all bad for staff, or at least those who play the game and ‘drink the Kool-Aid.’ Former employees alleged that those who have ‘more likable’ traits, do overtime without complaining, and don’t question the toxicity of the workspace are ‘given new iPhones, JetBlue gift cards, and other swag the show keeps on hand from its sponsors.’

“People focus on rumors about how Ellen is mean and everything like that, but that’s not the problem. The issue is these three executive producers running the show who are in charge of all these people [and] who make the culture and are putting out this feeling of bullying and being mean,” another former employee claimed. “They feel that everybody who works at The Ellen Show is lucky to work there — ‘So if you have a problem, you should leave because we’ll hire someone else because everybody wants to work here.’”

Degeneres, however, does not get off scot-free with these allegations. As one former employee said, ‘it’s her name up there and ‘she really needs to take more responsibility’ for the work environment fostered in her name and brand. Of course, Ellen herself really isn’t in any position to claim moral high-ground on these allegations. There are already enough stories out there about the way she treats her staff, her audience, fellow comics, and total strangers to demonstrate how deep her influence runs with such issues.

I mentioned in a piece I wrote way back in May that Ellen is a level of famous and beloved that is essentially unattainable to most people, and that even as her reputation takes a beating, she’ll always have that devoted fanbase in her corner who don’t check Twitter or follow inside baseball-style Hollywood gossip. Her Be Nice brand may be built on a mountain of stinky sh*t but it’s one that a lot of people have pumped a lot of money and energy into, and they won’t stop doing so just because they find it out might be inauthentic. Hell, they stuck up for her while she bragged about being friends with a war criminal so why should she care that her own staff is terrified of going to work every day?

In a joint statement to BuzzFeed News, executive producers Ed Glavin, Mary Connelly, and Andy Lassner said they took the stories of the employees’ allegations ‘very seriously’ and that ‘the day to day responsibility of the Ellen show is completely on us. We take all of this very seriously and we realize, as many in the world are learning, that we need to do better, are committed to doing better, and we will do better.’ Notice that Degeneres herself isn’t commenting and I don’t think she will unless she’s forced into it by something too impossibly embarrassing to ignore.

I do think we’ll start to see a few more ‘sources’ run to the tabloids to cry about how Ellen totally didn’t know about any of these problems and that she feels so upset about it. When in doubt, let the ‘sources’ talk.

← Jim Carrey is Insufferably New Age These Days, But Has an Interesting History with Sam Kinison | Review: Netflix's 'Down to Earth with Zac Efron' Provides an Affable Look at Climate Change →