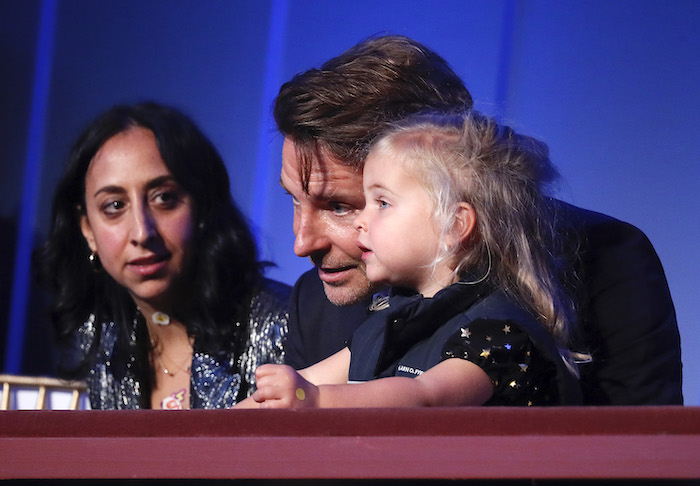 Let’s get this out of the way: I don’t remember what it was like to be 2-and-a-half years old. I have some vague memories of early childhood that are tied to intense experiences. Like the time my mother took me to see my first movie, Snow White and the Seven Dwarves and the sheer, abject terror I felt during the chase scene in the woods, and the end where the witch was trying to kill the dwarves because, with your first movie, you don’t understand that they typically have happy endings.

I bring this up for two reasons:

1) My 2-year-old interests very well could have been much more boring than they were as I got older.

2) I don’t remember the boring s*it at all, which is very good news for Bradley Cooper’s daughter, whom he hauled out to the Kennedy Center to honor Dave Chappelle with the Mark Twain award for humor.

I mean, I’m not entirely sure it was a great idea to attend an event with your toddler daughter in honor of a comedian who says some really horrifically misogynistic things in his “comedy” (among other punching-down targets who don’t have the platform to either defend themselves or say something actually funny back.) That said, this is delicious fuel for the child to throw in her dad’s face once she hits her teenage years and hopefully goes through a riot grrrl phase and rejects the shiny, Hollywood life B.Coop has made for her.

My favorite thing about the photos from the event (like in the above Tweet) is how seemingly bored and unengaged she is with the whole thing, because Lea De Seine Shayk Cooper is all of us in that moment. She, like us, didn’t want to be there and didn’t really care what was going on. Same, girl, same.

Let’s be honest about what’s really going on here (and no, it’s not related to the Mole People, as much as I wish it were): Bradley Cooper’s daughter is finally old enough to start hauling her out to events so that he has someone to be seen with, and keep the dating rumors swirling. By keeping up the mystery, and appearing with his daughter, it keeps the attention on who he is (or isn’t) dating while giving him a convenient photo op. It’s the only explanation as to why he would bring a toddler to an event that did not involve cartoons, popcorn, or fireworks. (Please note, I am not a parent, but in my very limited experience with two-year-olds, a gala honoring Dave Chappelle seems boring for me, a 35-year-old, so I can only imagine how bored a toddler would be.)

Could he have suffered a last-minute babysitting issue? Totally, but probably unlikely. B.Coop has the means to sort that out if he didn’t want to bring his daughter. Plus, he would have made a bigger show of bringing his daughter and you know People.com would have included that in their write up, like: “Cooper suffered a last-minute babysitting disaster last night, and opted to bring his daughter to the gala in support, blah, blah, blah….” kind of thing.

Of course, there is another option: As I’m sure you know, I am highly fascinated by past-life s*it, and children, primarily those aged from two to seven, have been studied because occasionally, they will claim to have memories from their before-lives.

Bradley Cooper’s daughter is in the right age to possibly be having past life memories, so it could explain why she was there. Perhaps the toddler actively wanted to go to a boring event because their previous life’s iteration had an interest in it. I don’t know if her outfit had pockets, and whether she kept a peppermint or Werther’s hard candy in them to suck on (because the air gets dry, you know) but that would have been a significant tell toward this theory being possibly true.

I mean, usually I go all-in on the supernatural explanation, especially around Halloween time, but today I’m going to leave it all open-ended because sometimes life’s mysteries don’t have any answers. I do hope that B.Coop’s kid got a delicious meal of cheese pizza or buttered noodles after this whole thing was said and done, because again, I don’t have kids but it is my understanding that those two items are what children would eat all day, every day, if they could. She held herself together mighty well for something I, at 35, would have had a problem sitting still for and she deserved a reward for it, dammit! I hope he allowed her to stay up past her 7:30 bedtime as well.