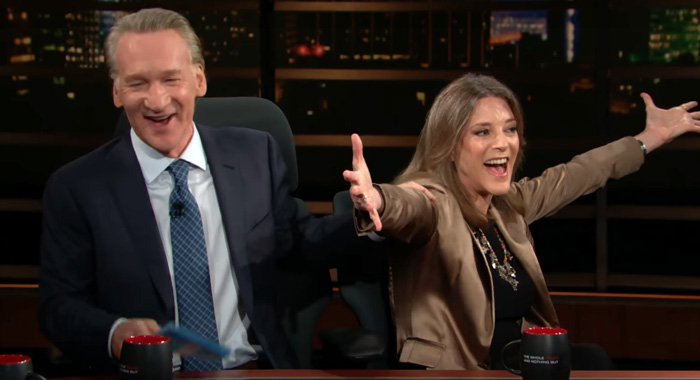 For the sake of not burying the lede, let me just state this right up front: Marianne Williamson is f*cking dangerous. She’s a self-help, snake oil merchant who’s going to get people killed (if she hasn’t already) with her California woo nonsense on vaccines and antidepressants. In no way is she a serious candidate for the Democratic nomination, and anytime she’s talked about without a thorough debunking of her horsesh*t is sheer negligence. Fortunately, Vox has an excellent explainer on her reckless views, and here’s Pajiba’s own Courtney Enlow with a conveniently shareable rundown of Marianne’s Greatest Hits.

These are some of the things Marianne Williamson has tweeted about mental health and antidepressants. She is hideously dangerous. pic.twitter.com/kCwiw3ujxt

In a right and just world, Marianne should’ve fallen off the map the second she got destroyed by Meghan McCain on The View, which never happens. It’s virtually impossible. Anytime The View lets Meghan pretend she’s a serious reporter who knows what the hell she’s talking about, it ends badly for Meghan. But somehow Marianne became the sole exception, which should’ve ended her candidacy right then and there. If you can’t hold your own against a nepotistic Jell-O shot in human form, you have no business running for office. And yet two months later, Marianne’s still around.

How does that happen? Well, like a broken clock that’s entirely made of crystals and aspirational Facebook memes, Marianne occasionally says something prescient about American politics albeit in between odd ramblings about how she’s going to defeat Donald Trump’s dark psychic forces on the battlefield of love or some shit. But thanks to the addictive toilet bowl known as Twitter, you inevitably get otherwise serious commentators trying to look smart and/or boost their anti-establishment cred by saying something like, “You hate to see it, but the organic sorceress is actually right.” (It also doesn’t hurt that Republicans are propping her up for blatantly obvious reasons.)

Marianne also came out of the second Democratic debate as the Most Googled Candidate, which somehow became a metric that people are using now but really shouldn’t. At all. I’ve worked with search traffic for 12 years, and let me tell you who’s been the most Googled person for the longest time running: Kim Kardashian. Why? Because her butt can block the sun. So maybe we shouldn’t be gauging political candidacy with the same tool that people use to search for celebrity anuses. Call me old-fashioned.

Anyway, all of this led to Marianne showing up on Real Time with Bill Maher where she found her batshit views fully embraced by Maher. Like a stereotypical white liberal, I used to watch Real Time every week during the late Bush/early Obama years, and Christ, did that guy love to derail a discussion with his vegan-esque, whatever-the-f*ck ramblings about how he never gets sick because of his diet. His favorite line was something like “Mosquitos only live where there’s a swamp.” So, of course, he ate up what Marianne was regurgitating down.

What’s crazy about this clip is that Maher opens with taking Marianne to task on her religious views, which are indeed nuts and the crux of her campaign strategy that thinks policy discussion is “last century” while spiritualism is not? But then she makes some remark about how her books are just about appealing to a higher power, and Bill Maher immediately softens and says, “Well, you can’t argue with that.”

You can! You did. You made a whole f*cking movie about it! And things only got worse from there.

Maher went on to praise his guest for “going to the root of things” instead of only focusing on the “surface” like her Democratic competitors. “You and I are simpatico on health,” he told her. “What you say is what I’ve always said.”

When Maher brought up mental health, it seemed for a moment like he might take Williamson to task for her claims that antidepressants do nothing more than “numb” people’s pain. But no, instead he said, “I’m with you on this.”

Suggesting that The New York Times has tried to frame her as a “crazy lady,” Maher declared, “I agree with everything.” Noting that she has “criticized the widespread use of antidepressants,” he said, “I’m down with that!” And on the claim that she “called the distinction between ordinary sadness and clinical depression ‘artificial,’” Maher said he believes she has been mischaracterized.

“Sadness is a part of life!” Maher added. “You don’t always need a pill for sadness.”

Just so we’re clear, that was Bill Maher fully endorsing Marianne Williamson’s dangerous views on psychiatric medicines, which shouldn’t be a huge surprise because Maher is also an anti-vaxxer. Like Marianne, he’ll deny that claim, but then in the same breath, he’ll spout off bullshit anti-vaccine talking points. (Jessica Biel pulled a similar move back in June.)

After his softball interview with Williamson, Maher made a baffling declaration. “All the Democrats have to do to win is to come off less crazy than Trump, and, of course, they’re blowing it,” he said.

But he wasn’t talking about his guest. Instead, the “crazy” Democrats he was referring to were mainstream politicians of the party’s left flank, who he characterized as “coming across as unserious people who are going to take away all your money so migrants from Honduras can go to college for free and get a major in ‘America sucks.’”

That’s a hell of a thing to say while sitting next to a woman whose campaign strategy is to straight-up Melisandre her way into the Oval Office. Sure, Elizabeth Warren is probably the most intelligent candidate to ever run for president and has a detailed plan for virtually every topic ever, but does she know that AIDS is really angels wearing Darth Vader suits? (Actual Marianne Williamson quote.) Then she can f*ck right off, says the guy who brought Milo on his show.